Darren Bravo, who was hit by a Jasprit Bumrah bouncer during third day's play of the West Indies vs India second Test, became the second concussion substitute in men's Test cricket, after Australia's Marnus Labuschagne, who came in for Steven Smith in the Lord's Ashes Test last month 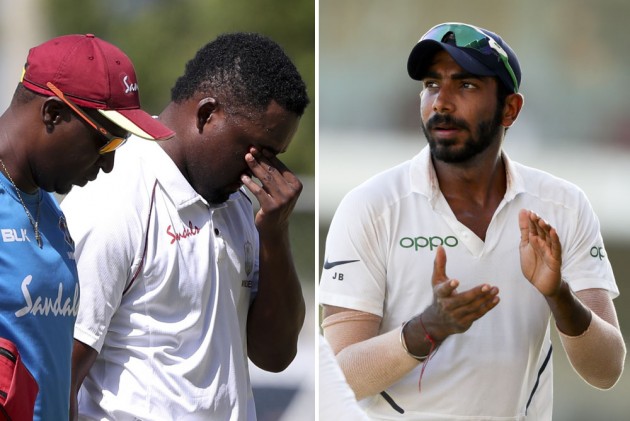 A day after coping a bouncer from India pacer Jasprit Bumrah, West Indies batsman Darren Bravo retired hurt on Day 4 of the second Test on Monday, thus forcing the hosts to draft a like-for-like player as a concussion substitute at Sabina Park, Kingston in Jamaica.

Bravo, who just hit Bumrah for a delightful drive for a four, retired hurt on 23. Windies, at 55/2 in 16.1 overs, saw one of their most experienced batsman walking back after a brief check from the team physio.

At Stumps on the penultimate day of the match, Windies were 145/4 in 40 overs, still needing 323 runs more to save the match. Blackwood was unbeaten on 33 off 42, and was involved in a promising stand with Shamarh Brooks (36 off 84).

For the uninitiated, the International Cricket Council (ICC) changed the playing conditions for the new Test Championship, which kicked off with the first Ashes Test. It now allows players who suffer concussions during a match to be replaced by a 'like-for-like' player, with the match referee being, as of now, the authority to allow such a replacement.

While issuing concussion guidelines, the ICC defined it as "a ‘traumatic brain injury induced by biomechanical forces’. It typically results in a rapid onset of neurological impairment that resolves spontaneously, although in some cases, clinical features may evolve over time. A concussion does not cause any structural damage to the brain, but acute clinical signs and symptoms largely reflect functional disturbance. Nevertheless, concussion is a potentially serious injury that may have both short (increased musculoskeletal and brain injury risk) and long-term (CTE, dementia and mental health issues) health risks. Concussion, therefore, requires a conservative management approach. "

The ICC follows the guidance provided by the 2016 Berlin Concussion Consensus, which is the current best practice benchmark.