Dominic Thiem came back from two sets down to beat Alexander Zverev in the final of US Open 2020 at New York early Monday morning and claimed his maiden Grand Slam title. (More Tennis News)

The 27-year-old Austrian thus became the first man in 71 years to win the US Open crown after dropping the first two sets in the final. But Thiem is the first player to do it away from Roland Garros.

Here are the previous four:

Besides becoming the first player to rally from two sets down to win a US Open final in the Open Era, and first since 1949, Thiem also is the first man born in the 1990s to win a Grand Slam.

And Thiem also became the first Grand Slam champion other than Novak Djokovic, Rafael Nadal or Roger Federer since Stan Wawrinka won the third of his Majors at the 2016 US Open.

"I don't know where to start. I'd like to congratulate Dominic on the first of many Grand Slam titles. It was a tough battle - I wish you would have missed a little more," Zverev, who took a two-set lead said after the defeat. "Here I am giving a runner-up speech. Thanks to my team for sticking with me - the last two years have not been easy - hopefully, one day we will lift this trophy... I want to thank my parents. I wish one day I can bring the trophy home." 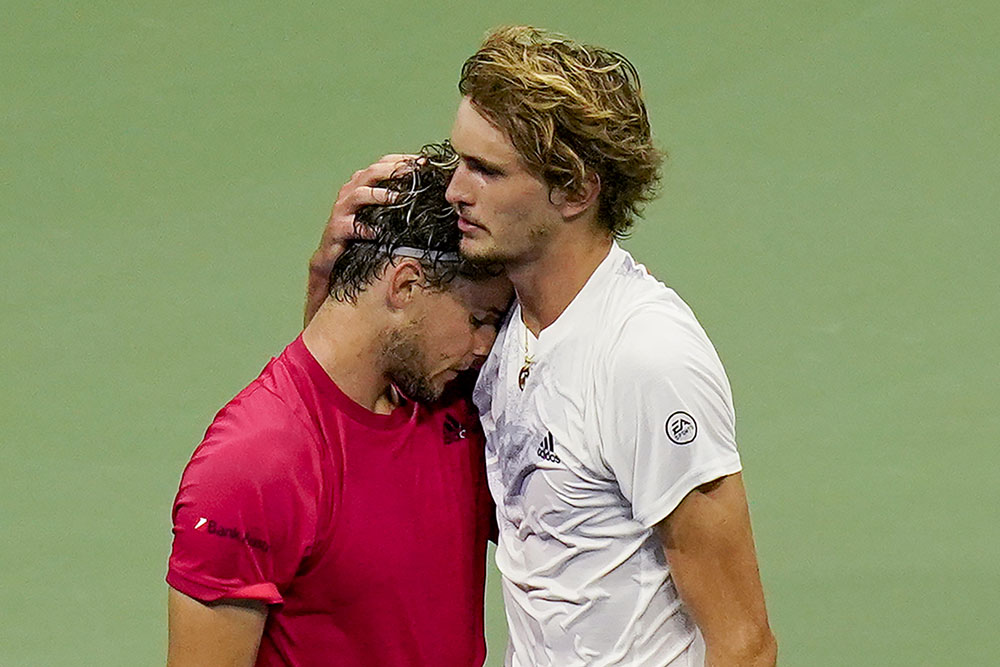 Reflecting on his friendship and budding rivalry with Zverev, the newest Grand Slam champion said: "We started to know each other in 2014 when we were both ranked 100th or something and straight away we developed a great friendship. Then in 2016, I think, our great rivalry started again and we made great things happen on and off the court. It is amazing how far our journey brought us."

After four relatively one-sided sets of attritions, Thiem – playing his fourth Major final – closed out the decider thanks to Zverev's mistakes.

There were six breaks of serve in the final set, with Zverev – playing his first major final – giving up a 5-3 lead before Thiem also failed to serve it out at 6-5.

But as both players looked tired and with Thiem cramping, he managed to hold his nerve the better of the two to win a first Major.

Zverev, who came from two sets down to beat Pablo Carreno Busta in the semi-final, was this time on the front foot from the outset and needed only 30 minutes to take the opener.

The German, 23, broke his apparently anxious opponent twice in the first set and raced into a 5-1 lead in the second.

Thiem raced forward to volley at the net and earn one break back, but Zverev served out the set and quickly went about making progress in the third.

Yet another poor service game concluded with a wayward stroke under little pressure, seemingly bringing the finish line into view after just 90 minutes of play.

Set 1
Set 2
Break in the 3rd @AlexZverev is a man on a mission. #USOpen pic.twitter.com/iloowJUTOh

But Thiem finally showed some resilience and, despite seeing one opportunity pass with an agonising miss at the back of the court, he tied the set again, then staying patient before another gain took the match to a fourth as the wobbling Zverev went wide.

Thiem's level improved as both held comfortably to begin the fourth set, although the Austrian was passive as he squandered two break points in the sixth game.

But Thiem would take his next chance, grabbing a 5-3 lead when Zverev double-faulted and then sent a forehand into the net, before closing it out to force a fifth set.

The pair traded breaks to begin the decider as both showed nerves before Thiem recovered from 0-30 in the sixth game and fell behind again in the eighth, Zverev breaking for a 5-3 lead, only to give that advantage straight back with a poor game when serving for the title.

Serving at 30-30 in the 10th game, Thiem produced two spectacular forehands, the first a rocket down the line before a passing shot.

Thiem, looking the more tired and perhaps cramping, broke for 6-5 when Zverev sent a forehand well long, but he too failed to serve it out after a brief visit from the trainer.

Zverev's 15th double fault gave Thiem a 5-3 lead in the tie-break before the latter squandered two match points, including one from a weak second serve from the German.