Kylian Mbappe can equal a record set by Lionel Messi when the Champions League returns on Tuesday, while Cristiano Ronaldo has a run of his own to continue. 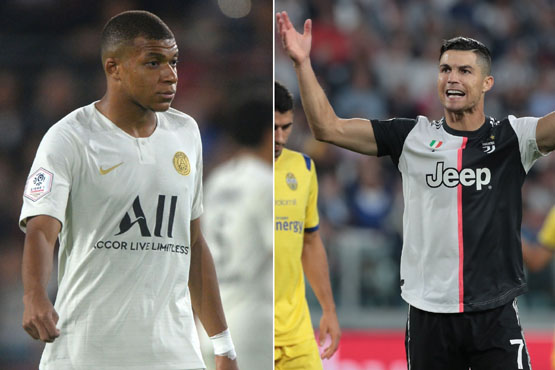 Real Madrid will be looking to kick-start their Champions League campaign against Club Brugge on Tuesday after losing to Paris Saint-Germain on matchday one, while Kylian Mbappe has his eye on a record of Lionel Messi's.

Madrid were crushed 3-0 by PSG last time out, with Thomas Tuchel's men looking extremely comfortable in a match that left Zinedine Zidane under a bit of pressure.

They have since bounced back with two wins and a draw in LaLiga and they will expect to get three points at home to Club Brugge, while PSG travel to Galatasaray.

The French champions will be able to call upon the services of Mbappe this time, having missed the Madrid clash through injury, and he is close to equalling a record set by Messi.

Below, we have highlighted the key data ahead of Tuesday's contests.

3 - Madrid are looking to avoid losing three successive Champions League matches for the first time in their history. They have not lost three in a row in European competition since September 1981.

50 - Los Blancos have won all three of their Champions League home matches against Belgian opposition by an aggregate score of 14-2. Their most recent competitive home defeat to a club from Belgium was 50 years ago in December 1969 versus Standard Liege in the European Cup (W4 D1 L0 since).

14 - Mbappe has scored 14 goals in the UEFA Champions League and will be aged 20 years and 284 days on the day of this match. The youngest player to 15 goals in the competition is Messi, who scored his 15th goal aged 21y 289d.

1 - If Galatasaray avoid defeat against PSG, it will be the first time they have remained unbeaten in the opening two games of a Champions League group stage since the format changed in 2003-04.

4 - Marko Marin was directly involved in four of Red Star's five goals during the 2018-19 Champions League campaign, including two assists against Liverpool in their only ever victory in the competition.

9 - Olympiakos have lost nine of their past 11 matches away from home in the Champions League (W2), shipping at least two goals in every defeat. Prior to this run, the Greek side had won three of their previous six on the road (D1 L2).

2 - Bayern are looking to become the second side after PSG in October 2017 to score two or more goals in six successive Champions League away group matches since the competition changed to its current format in 2003-04.

When you hear the Champions League theme tune! Good to be back in European action tomorrow! #COYS pic.twitter.com/dvMbs5yszA

20 - Shakhtar goalkeeper Andriy Pyatov has failed to keep a clean sheet in any of his past 20 Champions League starts – the only keeper with a longer such run in the history of the competition is Igor Akinfeev (43 starts between 2006 and 2017).

4 - Atalanta's 4-0 defeat to Dinamo Zagreb on matchday one was the heaviest defeat by a team in their first Champions League match since Qarabag lost 6-0 to Chelsea in September 2017.

10 - Against Shakhtar, City's Gabriel Jesus scored his ninth Champions League goal – should he score in this game, he will be the youngest Brazilian (22y 181d) to reach 10 goals in the competition and youngest South American since Lionel Messi (21y 99d) in October 2008.

1 - Mislav Orsic's hat-trick on his Champions League debut for Dinamo against Atalanta was the first treble scored for a Croatian team in the competition. Only two Croatian players have scored in their first two appearances in the competition; Alen Boksic in November 1992 for Marseille and Nikola Vlasic in 2018 for CSKA Moscow.

Simple like that We put Zinchenko's touch to the test!

Could you do better?

7 - Kieran Trippier created seven chances in Atletico Madrid's 2-2 draw with Juventus, the most of any player on matchday one this season. Since the start of last season, only Dusan Tadic (41) has created more chances than the England defender in the competition (32).

22 - Lokomotiv Moscow's victory over Bayer Leverkusen last time out was achieved with just 22 per cent possession, the lowest by a winning team in a Champions League match since Celtic had 15 per cent and beat Barcelona 2-1 in November 2012.

26 - Juventus star Cristiano Ronaldo has scored 26 goals in 24 appearances against teams from Germany in the Champions League – no player has more against teams from a specific nation (Lionel Messi v English teams, also 26). This will his first appearance against Bayer Leverkusen in the competition.

78 - Leverkusen had 78 per cent possession in their 2-1 defeat to Lokomotiv Moscow, the most by a team in a Champions League match since Bayern Munich had 78.8 per cent against Arsenal in February 2014.