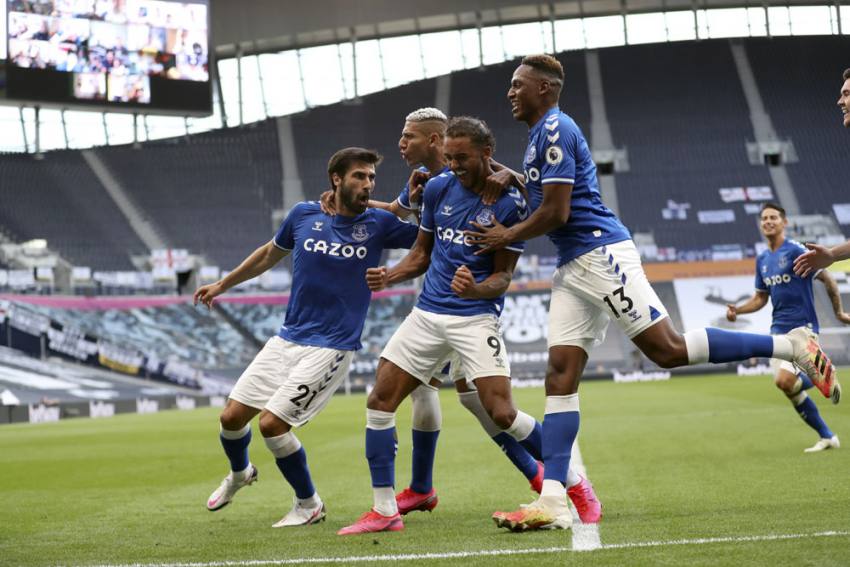 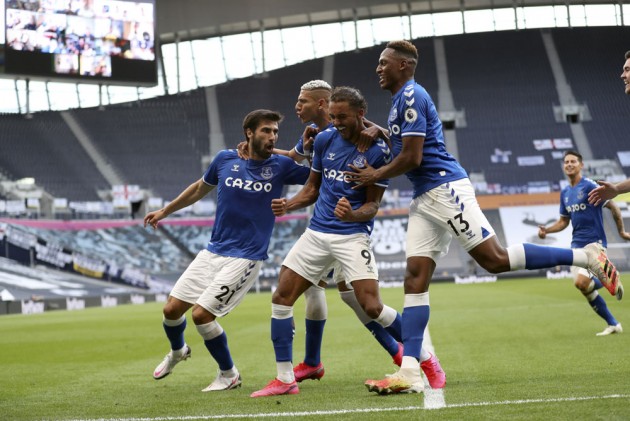 Dominic Calvert-Lewin nodded the only goal on Sunday as Jose Mourinho's second season at Tottenham started with a 1-0 home defeat to big-spending Everton. (More Football News)

Mourinho arrived at Tottenham Hotspur Stadium last November and guided a struggling Spurs side to sixth and a Europa League place, but improvement was anticipated heading into the new campaign.

Tottenham were outplayed by Everton, though, who gave debuts to James Rodriguez, Allan and Abdoulaye Doucoure and might have led long before Calvert-Lewin's brilliant 55th-minute header.

Mourinho's men could not muster a response and are already searching for answers at the start of a brutal stretch in which they could play as many as nine matches before the October international break.

Everton were gifted a huge chance to take the lead after 16 minutes as Ben Davies' wayward crossfield ball escaped Toby Alderweireld and the alert Richarlison pounced.

The Brazil forward rounded Hugo Lloris but, with the angle narrowing, ignored Calvert-Lewin in the centre and awkwardly hacked over a gaping goal.

Jordan Pickford twice came to the visitors' rescue with big stops, turning Dele Alli's shot over the top and blocking from Matt Doherty, while James curled a 20-yard effort wide.

Mourinho replaced Alli with Moussa Sissoko at half-time, but Tottenham trailed 10 minutes after the restart as Calvert-Lewin towered over Eric Dier with a superb header from Lucas Digne's free-kick.

Richarlison twice bent attempts beyond the right-hand post, yet the single goal proved enough as Spurs struggled at the other end in a concerning early loss.

What does it mean? Tough start for Tottenham

Given the daunting schedule Spurs face, they could have done without the scrutiny that will come with an early defeat. But this was a deserved reverse.

Tottenham lacked an attacking threat throughout, managing only nine shots to Everton's 15, while Harry Kane did not touch the ball in the Toffees' box in the first half.

The long trip to Lokomotiv Plovdiv comes next, where Mourinho's side must improve to avoid embarrassment.

The Everton number nine might have felt he should have been given the opportunity to break the deadlock in the first half when Richarlison instead chose to shoot, but he took his chance when it came.

Mourinho's midfield in a muddle

Mourinho has been able to make his own signings, adding Pierre-Emile Hojbjerg to the midfield, but he still appeared uncertain of his best side as the season got under way.

Alli's average position was in advance of Kane during his 45-minute stint, before Sissoko came in on the right flank and then shifted inside as Harry Winks made way.

1 - José Mourinho has been defeated on the opening matchday of a league campaign for the first time in his managerial career in what is his 19th such match, winning 11 and drawing seven of the previous 18 before today. Skewed. pic.twitter.com/zkT1zn4fXO

Hojbjerg completed 91.9 per cent of his passes and was the only home player to register more than one tackle, but Everton's new-look midfield dictated the play.

- Mourinho has lost on the opening matchday of a league campaign for the first time in his managerial career. It was his 19th such match and he won 11 and drew seven of the previous 18.
- Everton managed to secure their first Premier League win in London in nine games (D4 L4), with this only their second top-flight win in the English capital in their past 20 matches. They beat West Ham 2-0 in March last year.
- Only Pep Guardiola (4/4) can boast a better 100 per cent winning ratio on the opening weekend of Premier League seasons than Ancelotti, who has won each of this three openers, matching the efforts of former Nottingham Forest boss Frank Clark.
- Only Chris Wood (14) and Kane (12) have scored more headed goals in the Premier League since the beginning of 2017-18 than Calvert-Lewin (11).
- James created five opportunities for his teammates, the most by a player on their Premier League debut since Alexis Sanchez also carved out five chances for Arsenal against Crystal Palace in August 2014.

Tottenham go to Bulgaria before returning to visit Southampton next Sunday. Everton, by contrast, have back-to-back home games against Salford City in the EFL Cup and West Brom in the league.