Dahiya on Wednesday became only the second Indian wrestler to qualify for the title clash at the Olympic Games, 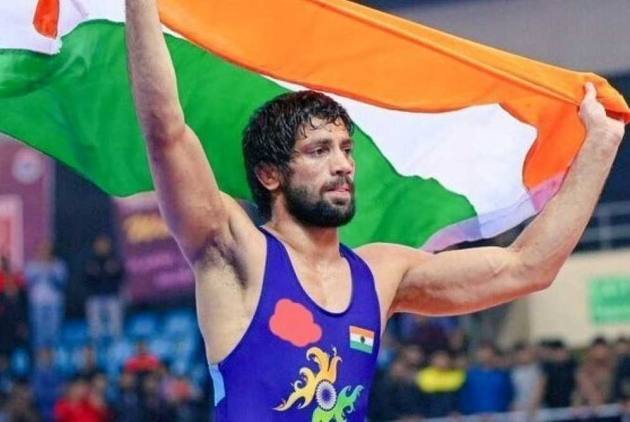 Celebration broke out in wrestler Ravi Dahiya's native village on Wednesday after he stormed into the finals of the Tokyo Games to assure India of a fourth Olympic medal. Tokyo Olympics | Full Schedule | Sports News

Dahiya on Wednesday became only the second Indian wrestler to qualify for the title clash at the Olympic Games, when he sensationally turned around the 57kg semifinal bout by pinning Kazakhstan's Nurislam Sanayev.

Soon his family and natives of the 'Nahri' village erupted in joy as they recalled Dahiya's passion for the sport and strong determination to achieve success at the highest level.

Dahiya's father Rakesh was in a jubilant mood and said, "Ravi will win gold, I am confident.

"I cannot express happiness in words," he said turning emotional after his son made a strong comeback to win the bout.

The fourth seeded Indian was trailing 2-9 when Sanayev effected a few 'fitley' (leg lace) moves to pull ahead but as the clock ticked away, Dahiya regrouped and got hold of his rival with a double leg attack that resulted in a victory by fall.

Before this, Sushil Kumar was the only Indian to make the gold medal bout in 2012 London Games and settle for a silver.

"He had promised the family that he will bring Olympic gold," said Rakesh, recalling the hardwork his son has put in for years to achieve success at Olympic level.

"Every day he practices for eight hours," he said.
He said since age six, he had started wrestling in a village Akhara. Later, he went to Chhatrasal stadium in Delhi.

Rakesh recalled carrying milk and butter to Chhatrasal stadium, an hour's drive from the village, each day to ensure that his son got the best diet.

Savitri, Dahiya's grandmother, said she was very happy at his achievement.

"Before leaving for Tokyo, he had told me grandma, I will be back with a gold medal," she said.

Another relative, Rinki, said, "Ravi told me mausi (aunt) I will make entire country proud. And he has done that today and is just a step away from gold".

Dahiya, son of a farmer, is the third Olympian to emerge from this village after Mahavir Singh (1980 Moscow, 1984 Los Angeles) and Amit Dahiya (London 2012).

Live, BAN vs OMN, T20 World Cup: Oman Restrict Bangladesh For 153 All Out