Meanwhile, two Georgian tennis players have been barred from the Olympics after officials in their home country told them they were entered for the Games but never actually sent the paperwork 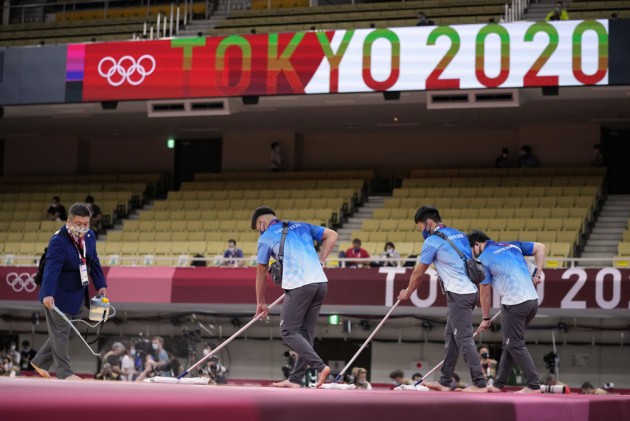 An Algerian judo athlete will be sent home from the Tokyo Olympics after he withdrew from the competition to avoid potentially facing an Israeli opponent.

Fethi Nourine and his coach, Amar Benikhlef, told Algerian media they were withdrawing to avoid a possible second-round matchup with Israel's Tohar Butbul in the men's 73 kg division on Monday.

Nourine was to face Sudan's Mohamed Abdalrasool in the opening round, with the winner facing Butbul, the fifth seed.

The International Judo Federation's executive committee has temporarily suspended Nourine and Benikhlef, who are likely to face sanctions beyond the Olympics, which began Saturday.

The Algerian Olympic committee then withdrew both men's accreditation and made plans to send them home.

The IJF said Nourine's position was "in total opposition to the philosophy of the International Judo Federation. The IJF has a strict non-discrimination policy, promoting solidarity as a key principle, reinforced by the values of judo."

Nourine and Benikhlef attribute their stance to their political support for Palestinians.

Meanwhile, two Georgian tennis players have been barred from the Olympics after officials in their home country told them they were entered for the Games but never actually sent the paperwork.

The Court of Arbitration for Sport ruled that it had to turn away doubles players Oksana Kalashnikova and Ekaterine Gorgodze because they were never formally entered for the games, even though Georgia's Olympic committee "informed the applicants that their application had been submitted."

Without a formal entry for the Olympics, the court ruled that the "consequence, however unfortunate for the two athletes, can only be the dismissal of their petition."