Josh Hazlewood took five wickets as England were bundled out for 67 on Day 2 of the third Ashes Test at Headingley, Leeds on Friday. In reply, Australia were 171/6 at the close of play -- with an overall lead of 283. 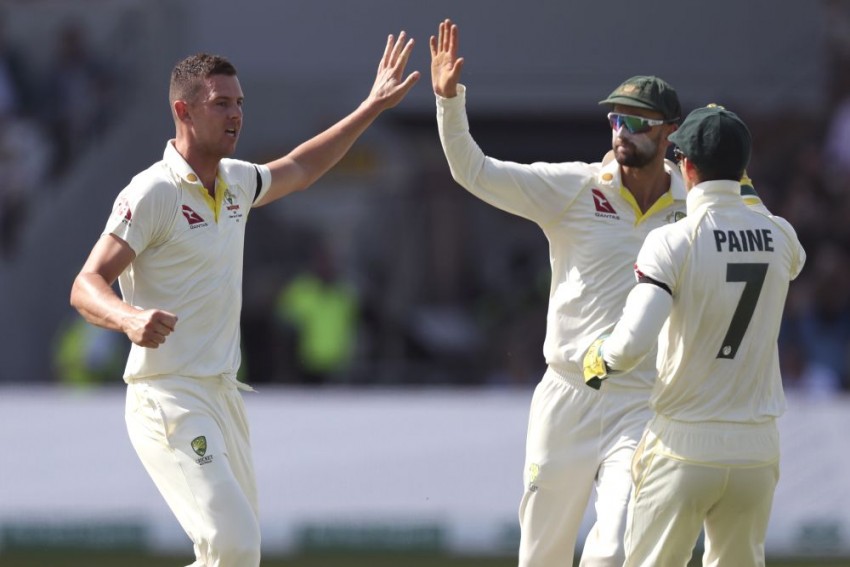 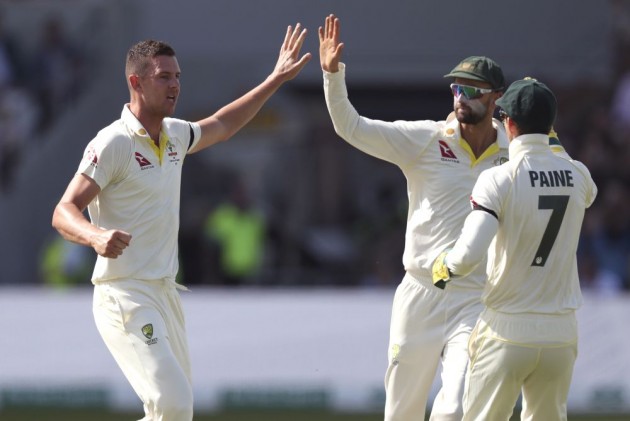 Josh Hazlewood took five wickets as England were bowled out for just 67 on the second day of the third Test at Headingley on Friday to leave Australia on the verge of retaining the Ashes. (HIGHLIGHTS | SCORECARD)

This was England's lowest Ashes total since 1948 and the fourth time in 18 months they had been dismissed for under a hundred in a Test -- a record unmatched by any other side in the same period. (CRICKET NEWS)

Fast bowler Hazlewood took 5-30 in an England innings that was wrapped up inside 28 overs.

Ashes-holders Australia -- who will go 2-0 up with just two to play in this five-match series by winning at Headingley -- then strengthened their grip to be 171-6 in their second innings at stumps, a commanding lead of 283 runs.

Marnus Labuschagne, whose first-innings 74 was seven more than England managed between them, was 53 not out.

It was his third straight fifty of the series after he made 59 in the second innings of the drawn second Test at Lord's after coming into the side as a concussion substitute for star batsman Steve Smith.

A miserable day for England also saw captain Joe Root out for a duck on his Yorkshire home ground before he dropped a routine slip catch when Labuschagne had made 14.

England's woes were compounded after tea when rising star Jofra Archer -- who had taken 6-45 in Australia's first-innings 179 -- limped off midway through an over with cramp, although he did return to the field.

Labuschagne was dropped for a second time, on 42, when wicketkeeper Jonny Bairstow failed to hold a tough low chance diving to his right.

Earlier, Joe Denly, with 12, was the only England batsman to reach double figures.
But whereas Labuschagne and David Warner (61) fought hard during their first-innings partnership of 111, few England batsmen were as prepared to sell their wickets as dearly.

By staging both the World Cup and the Ashes with a short turnaround between the two showpiece events, England had denied several batsmen first-class preparation for the very different demands of Test cricket.

By contrast, a number of Australians had appeared for English county sides -- Labuschagne, the only batsman to so far score 1,000 first-class runs this season was with Glamorgan -- or featured on the Australia A tour of England.

Friday's slump came after England had been dismissed for 58 by New Zealand (Auckland 2018), 77 by the West Indies (Bridgetown 2019) and 85 by Ireland at Lord's last month.

What made this latest rout all the more troubling was that the blue and sunny skies above Headingley on Friday ought to have made conditions for batting easier than the gloom of Thursday, when Root won the toss.

Jason Roy, given the poisoned chalice this season of being an England Test opener despite batting in the middle-order in first-class cricket with Surrey, took guard having made just 40 runs in four innings this series.

He fell for nine in familiar fashion when he edged a drive off a wide Hazlewood ball to Warner, holding the first of four catches at first slip.

Root Out For A Duck

Root was then out for a second-ball nought, that followed a golden duck at Lord's, when nicking a fine Hazlewood delivery to Warner.

Hazlewood had taken two wickets for no runs in three balls, with England 10-2.
Ben Stokes had made an unbeaten 115 in the second innings at Lord's.

But the all-rounder gave his wicket away when he carved at a wide half-volley from fast bowler James Pattinson he could barely reach, with Warner holding a fast edge high above his shoulder.

Denly fought hard only for his 49-ball stay to end when caught behind following an inexplicably extravagant drive off Pattinson.

England were 54-6 at lunch, with Bairstow and Jos Buttler falling cheaply either side of the interval, before Hazlewood ended the innings when he clean bowled No 11 Jack Leach.