Raheem Sterling scored his 12th goal of the season as Manchester City cruised into the FA Cup quarter-finals and made history with a 3-0 win at Swansea. 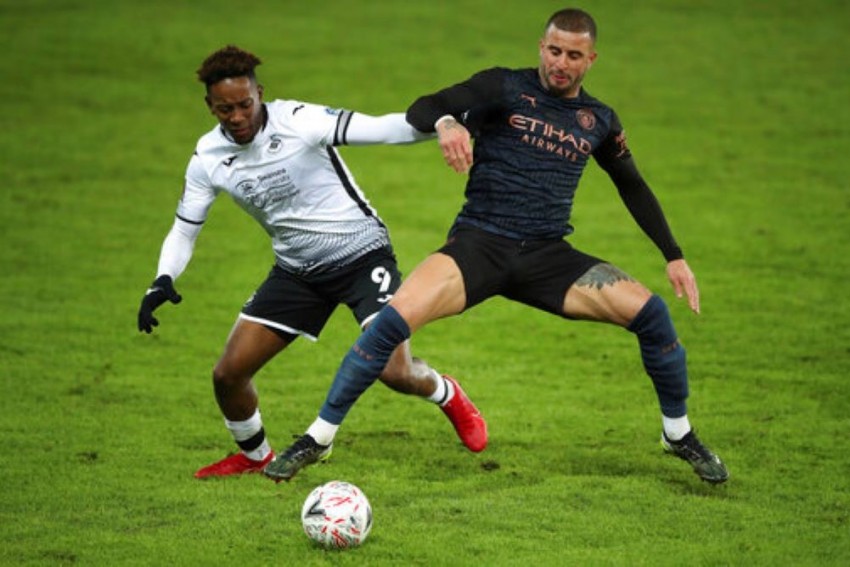 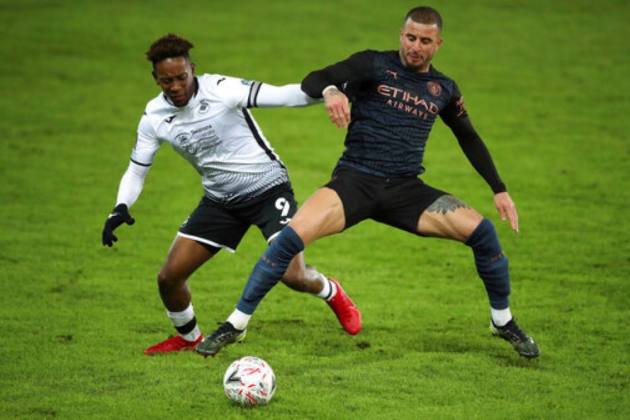 In-form Raheem Sterling scored his 12th goal of the season as Manchester City cruised into the FA Cup quarter-finals and made history with a 3-1 victory at Swansea City. (More Football News)

Pep Guardiola's irrepressible side eased to a 15th consecutive win - a record for an English top-flight club - at the Liberty Stadium to stay in the hunt for an unprecedented quadruple.

Kyle Walker opened the scoring with a cross and two goals in the space of three minutes early in the second half put the Premier League leaders out of sight.

Championship promotion contenders Swansea were outclassed as the City juggernaut rolled on, although they did suffer a blow when Rodri was forced off with an injury before Morgan Whittaker pulled a goal back.

Jesus received treatment on his ankle early on, but was able to continue and the striker missed a chance to opening the scoring when he steered Benjamin Mendy's cross wide.

Swansea were chasing shadows as City dominated, knocking the ball around with a swagger, and Ferran Torres' shot from a tight angle was brilliantly tipped wide by Freddy Woodman.

Woodman was beaten on the half-hour mark, though, when Walker's centre from the right evaded everybody and found the far corner of the net.

Marc Guehi nodded wide at the other end in a rare Swansea attack, but an unmarked Sterling finished clinically when he was well picked by Rodri two minutes into the second half.

Swansea were caught out again soon after, with Jesus controlling a clever cushioned header back across goal from Bernardo Silva in an instant and swivelling to fire home with his left foot.

Joel Latibeaudiere somehow denied Mendy a tap-in with great last-ditch defending and Rodri limped off before Whittaker superbly gave the hosts a consolation, drilling in left-footed for his first Swansea goal.

What does it mean? No stopping imperious City

Swansea have been in impressive form in the Championship, but they were no match for Guardiola's men.

City have won every game since drawing 1-1 with West Brom on December 15.

They matched a record of consecutive victories, which Preston North End and Arsenal also achieved, with a 4-1 drubbing of Liverpool at Anfield on Sunday and bettered that with another dominant display.

Sterling goes from strength to strength

Guardiola was not impressed when he was asked about Sterling's finishing after the England forward went through a short spell without a goal.

The England forward has showed his class in front of goal since and is now City's leading scorer this season. The former Liverpool man has found the back of the net five times in his last six matches.

12 - Raheem Sterling is Manchester City's outright top scorer in all competitions this season with 12 goals. Since the beginning of last season, his 43 goals are 12 more than any other player for the club. Dream. pic.twitter.com/xNkSAPv0AR

Spain midfielder Rodri was outstanding once again in the middle of the park.

He provided two assists and made a game-high six key passes as City gave the Swans a lesson with their slick passing and movement. What appeared to be an ankle injury sustained by Rodri in the second half would be a worry for Guardiola, though.

- Man City have won 13 of their last 15 meetings with Swansea in all competitions (D2), including each of the last seven in a row.
- Swansea conceded 3+ goals in a home game for the first time in over a year, last doing so versus Derby County on February 8 2020 (2-3).
- They have lost each of their last five FA Cup games against top-flight clubs, conceding two or more goals in each defeat.
- Since Guardiola's first season in England, Man City have scored more FA Cup goals than any other side (68).
- Jesus has now scored in each of his last four starts for Manchester City, his best run since scoring in seven straight starts between April-October 2019.
- Since the start of the 2015-16 season, Sterling (15) has been directly involved in more FA Cup goals than any other Man City player (8 goals, 7 assists).

Tottenham face the task of trying to halt City's incredible run in a Premier League encounter at the Etihad Stadium on Saturday.

The Swans travel to Sheffield Wednesday on the same day and Whittaker - a recent signing from Derby County - will be buoyed by being youngest player to score a goal against City in any competition since Kylian Mbappe in March 2017.