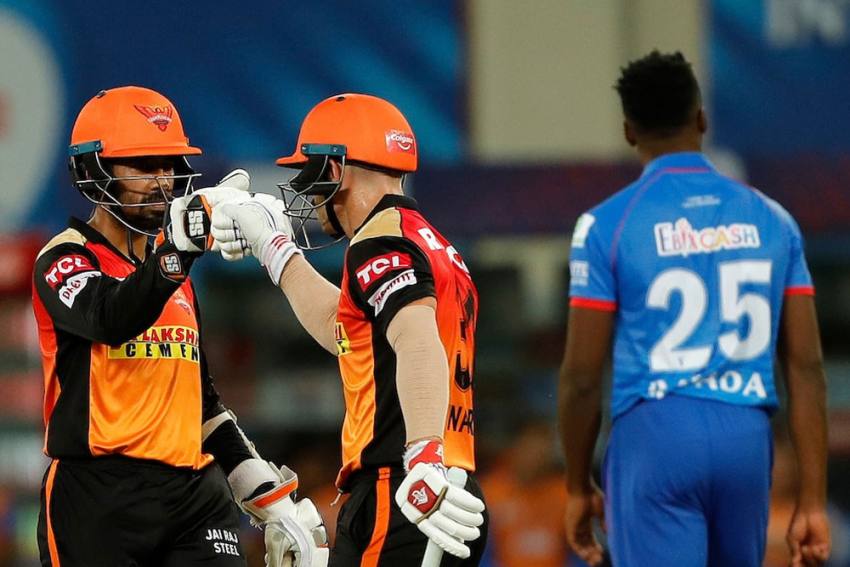 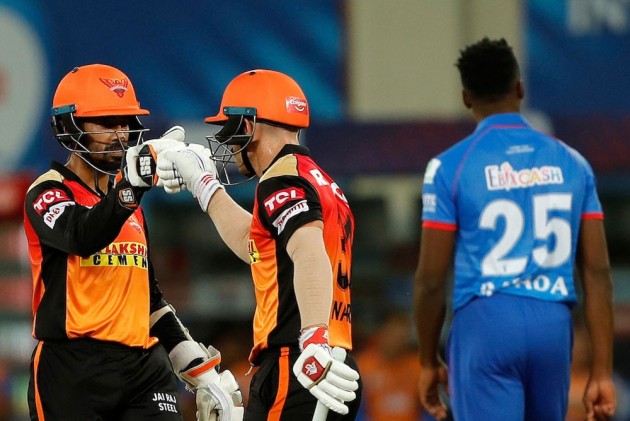 Sunrisers Hyderabad thrashed Delhi Capitals by 88 runs  on Tuesday in their return-leg of the Indian Premier League (IPL) 2020 to keep themselves alive in the tournament. Wriddhiman Saha, one of the three changes in the SRH line-up, top-scored with his 87-run knock while skipper David Warner made 66. Then, leg-spinner weaved his magic again, returning with season's best figures: 4-0-7-3. The win helped the former champions climb to sixth in IPL 2020 table, with ten points. DC are third with 14 from 12 outings. Both the teams are left with two matches each. (SCORECARD | POINTS TABLE | SCHEDULE & RESULTS | NEWS)

11:00 PM IST: Natarajan on with his last over. Nortje holed out, catch taken by Garg. Six runs from the over for figures of 2/26. And Hyderabad hammered Delhi by massive 88 runs to stay in contention for the playoffs.

10:21 PM IST: Vijay Shankar walked off the field. David Warner finished off the over, but not before a wide. And he almost got a return catch off Pant. This was the first time, Warner's bowling in IPL. Six runs and a wicket from the over. Delhi - 82/5 (12); Pant 19, Patel 1.

9:51 PM IST: Jason Holder on with his second over. A single, then Hetmyer escaped with a fingertip touch from Nadeem at backward point. It was followed by another four, over mid-wicket. A single and Rahane played a beautiful pull shot for a six. A four to end the over, off the pads. Leg byes. 20 runs from the over. Delhi - 54/2 (6); Rahane 26, Hetmyer 16.

9:47 PM IST: Sandeep Sharma continued. A single, then Rahane timed his cover to perfection for a four. Hetmyer smashed the fifth to long off boundary for a four. Then, almost dragged in. Ten runs from the over. Delhi - 34/2 (5); Rahane 19, Hetmyer 7.

9:34 PM IST: Shahbaz Nadeem with the second over of the innings. Rahane hit the first ball for a four, to backward point. Then, Stoinis' wicket. Caught by Warner. Stoinis made 5 off 6. First wicket for Nadeem. Delhi - 14/2 (2); Rahane 7.

9:06 PM IST: Kagiso Rabada with the final over. Somewhat tepid now from Hyderabad batsmen. Only a four off the second by Williamson, over backward point. Seven runs from the over. And the streak ended for Rabada, wicketless tonight. His figures - 0/54. Hyderabad - 219/2 (20); Pandey 44, Williamson 11.

9:02 PM IST: Anrich Nortje on with his final over. Good start but Manish Pandey got an outside edge for a four off the third, then a brilliant yorker. Batsman let go of the ball between his legs. Ten runs from the over. Nortje's figures - 1/37. Hyderabad - 212/2 (19); Pandey 42, Williamson 6.

8:25 PM IST: Axar Patel returned for his third over. A dot, then Saha clobbered the second for a big six over square leg boundary. Followed by a three, behind the keeper. He's toying with Delhi bowlers. Saha then hit another four, diving cover fielders with sublime timing. He needed a medical time-out. Breathing heavily. 15 from the over. Hyderabad - 142/1 (12); Saha 69, Pandey 5.

8:20 PM IST: What a knock. Warner was going hammer and tongs for his 25-ball fifty. But quietly, Saha reached his fifty in 27 balls. His second fastest in IPL. He reached with a sublime four, behind square. He followed it up with another beauty. A four to backward point. New man Pandey ran three off the fifth. 14 from Deshpande's second over. Hyderabad - 127/1 (11); Saha 55, Pandey 4.

7:58 PM IST: Kagiso Rabada returned for his second over. And Warner took on the leading wicket-taker. Hit the first two balls for fours. A dot, then launched the fourth over cow corner, and a four third man to bring up fifty for the birthday boy. In 25 balls. And another four to third man. 22 runs from the over. Season's highest power-play score for  Warner and Co. Hyderabad - 77/0 (6); Warner 54, Saha 22.

7:46 PM IST: Bowling change. R Ashwin on with his offspin. Two dots, then Warner launched the third for a six. Slog sweep with some determination. A single to rotate the strike. Saha is playing freely. Made room and swung hard for a double to third man. Saha finished off with a four to backward square leg. 13 runs from the over. Hyderabad - 33/0 (3); Warner 12, Saha 21.

7:41 PM IST: Rabada with the second over of the match. Warner drove the first ball to mid-on, and ran three. Saha got cheeky, an inside edge for four. And another four, this time to square leg. A couple, followed by a couple of singles. 15 runs from the over. Hyderabad - 20/0 (2); Warner 5, Saha 15.

7:37 PM IST: Calm and serene start to the match. Nortje warming up, and Saha caressing the fifth ball for a four to square leg boundary. Five runs from the over. Hyderabad - 5/0 (1); Warner 1, Saha 4.

7:32 PM IST: Nortje with the new ball. Warner and Saha opening for Hyderabad. Warner on strike.

7:25 PM IST: In the first leg, a bowling masterclass from Rashid Khan meant that Hyderabad won the match in Abu Dhabi by 15 runs. Like tonight, Delhi won the toss and opted to field first. David Warner and Jonny Bairstow added 77 runs for the first wicket, then Kane Williamson scored 41 off 26 to post 162/4. Shikhar Dhawan top-scored for Delhi with 31-ball 34.

Now, things have changed drastically.  Delhi are on the cusp of making the play-offs, while Hyderabad are fighting for survival. And entails tweaks in the XI. Bairstow is out. Huge call.

7:06 PM IST: Delhi are playing with the same team from their last match. Three changes for Hyderabad. Kane Williamson, Wriddhiman Saha and Shahbaz Nadeem in for Jonny Bairstow, Priyam Garg and Khaleel Ahmed.

6:45 PM IST: As we build up to the match, here's a look at the playoff qualification scenarios.

Kings XI Punjab seem to have found a second wind in their Indian Premier League (IPL) campaign. From a dismal show of losing six matches on a trot, KXIP have now won five straight games. Now with 10 games left in the league stage, the top three - Mumbai Indians, Delhi Capitals and Royal Challengers Bangalore - are all tied on 14 points and need one win each to secure playoff berths.

By the end of tonight, Delhi Capitals would love to complete the unfinished business and seal their place in the playoffs. Two back-to-back defeats against Kolkata Knight Riders and Kings XI Punjab must have hurt DC, but they need to shrug it off. A crucial two points will take their tally to 16, which will elevate them to the top of the table.

On the other hand, Sunrisers Hyderabad's hopes to reach the playoffs are hanging by a thread. David Warner and his men occupy the penultimate spot with eight points from 11 outings. To reach the qualifiers they must win their remaining three games and hope all other results go their way.

DC possess an explosive batting department as well as a formidable bowling unit. They have not been dependent on any one person, as different players have shouldered responsibilities different points through the season to deliver the goods for the team. However, off lately apart from Shikhar Dhawan, the DC batsmen have been very inconsistent. Opener Prithvi Shaw, going through a lean patch, was replaced by Ajinkya Rahane but to no avail. Rishabh Pant and Shimron Hetmyer have also struggled since their return to the playing XI.

The South African pace duo of Kagiso Rabada (23 wickets) and Anrich Nortje (14) has been exceptional. Sunrisers Hyderabad head into the clash after a demoralising loss. Chasing a modest 127 against KXIP, the complexion of the match changed following the dismissal of openers Warner and Jonny Bairstow in quick succession. The former champions lost five wickets in the final two overs to suffer a humiliating defeat.

The team heavily relies on its batting unit, mainly on Bairstow, Warner and Manish Pandey. Vijay Shankar did well in the win against Rajasthan Royals but couldn't replicate his performance against KXIP.

Live streaming of Sunrisers Hyderabad vs Delhi Capitals, IPL 2020: Where To Watch Live