Stan Wawrinka withdrew from his Swiss Indoors quarter-final with nine-time champion Roger Federer because of a back injury. 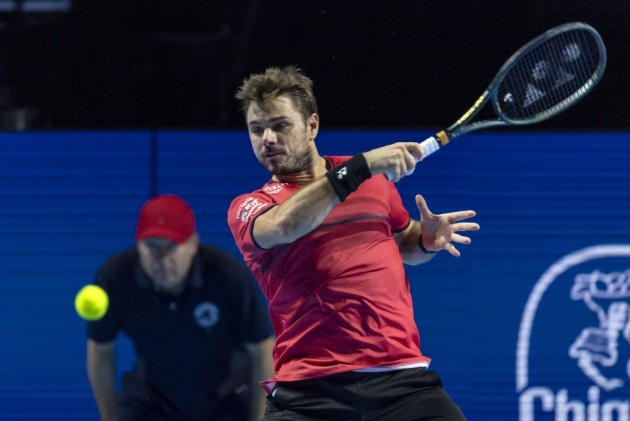 Stan Wawrinka was forced to withdraw from Friday's Basel quarter-final showdown against best friend Roger Federer with a back injury, just an hour after struggling past America's Frances Tiafoe in a gruelling second round clash. (TENNIS NEWS)

"I had some trouble with my back in the last game. I'm sure I cannot make it for Friday (October 25). I will pull out." Top seed Federer, chasing a 10th title at his hometown event, will receive a walkover into Saturday's semi-finals.

Wawrinka stands in provisional 14th place in the points race to the year-end ATP Finals and his chances of qualifying now look slim with just next week's Paris Masters to play on the regular schedule.

The struggle against Tiafoe, which lasted for two and a half hours and was decided by an 11-minute concluding game, had put Wawrinka into his fifth quarter-final at the Swiss tournament.

"I was fighting well, he was playing well, I expected a tough match," Wawrinka said.

Wawrinka hammered 14 aces -- his last two in the penultimate game.

Tiafoe saved a Wawrinka match point with an ace of his own in the final game before the home favourite got the crowd on its feet with a backhand winner down the line to seal the success.

Both players hugged at the net, with Tiafoe receiving a standing ovation from the 9,000-strong crowd.

Stefanos Tsitsipas reached his 13th quarter-final of the year when he came back to claim a 6-7 (4/7), 6-2, 6-4 win over Lithuanian qualifier Ricardas Berankis.

Tsitsipas said he didn't panic after losing the opening set to his 70th-ranked opponent in 52 minutes.

"He was giving me a hard time in the first set, it was not easy to overcome, we had a high-quality match," said Tsitsipas, the World No. 7.

"I managed to remain calm and not rush too much."

Goffin stands provisional tenth in the race to the eight-man season wrap-up with a final points-earning chance next week in Paris.

Roberto Bautista Agut, who sits one spot away from a London invitation, stayed in the chase as he defeated France's Richard Gasquet 6-2, 4-6, 6-3 and will next play Opelka.

The Spaniard claimed his 40th victory of the season as he works to become a first-time qualifier into the season showpiece in London which starts on November 10.