Sports Sergio Aguero Expects Lionel Messi To Stay At Barcelona, But Will Pep Guardiola Arrive Next?

Sergio Aguero Expects Lionel Messi To Stay At Barcelona, But Will Pep Guardiola Arrive Next?

Sergio Aguero agreed a move to Barcelona on Monday, but the striker cannot be sure who will be his head coach at the club 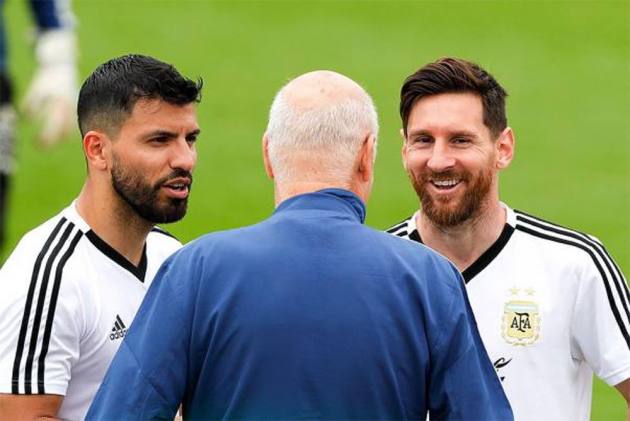 Sergio Aguero signed on the dotted line at Barcelona but refused to discuss the possibility of Pep Guardiola following him from Manchester City to Camp Nou. (More Football News)

Barcelona are in a state of upheaval amid doubts over Ronald Koeman's future, with club president Joan Laporta describing the Dutchman as "a coach that we did not ask for" on Monday.

Laporta has not excluded the possibility of Koeman staying in charge for the second year of his contract, but it appears the club are also looking at alternative options to come in and take charge.

Aguero is also thought of as a potential upgrade on the talent Barcelona have as striking options, besides Lionel Messi, having become Manchester City's record goalscorer during a highly successful decade in England.

The new recruit also said he thought Messi would be staying at Barcelona, continuing their partnership from the Argentina national team.

However, asked about the possibility of Barcelona re-hiring Guardiola, who coached the Blaugrana from 2008 to 2012, Aguero stayed well clear.

The 'one' would be Laporta, the president who was elected in March. His predecessor, Josep Maria Bartomeu, appointed Koeman.

Asked about the latest situation with Koeman, during what was Aguero's presentation news conference, Laporta said: "I already said that we have started a period of reflection, for the reasons I said.

"As he was a coach that we did not ask for, we needed that period. There are contacts, I have already said that he is a coach with a current contract and our will is to respect it as long as this period of reflection occurs."

2 - Lionel Messi has assisted Sergio Agüero for nine goals for Argentina , more than any other teammate. Agüero has assisted Messi for five goals for the national team - only Carlos Tevez (six) and Gonzalo Higuain (seven) have assisted more. Tango. pic.twitter.com/Hl7j1eraOi

Koeman almost led Barcelona to a domestic double in 2020-21, but a dip in league form over the closing weeks of the season meant their charge since the turn of the year was only good enough for third place in LaLiga. They won the Copa del Rey, but that may not be enough to save him.

Laporta was also questioned about whether Aguero had been brought in to please captain Messi, who has yet to sign a new contract with his current deal to expire at the end of June.

The president replied, according to Mundo Deportivo: "The signing of Aguero is because he is a desired player and an exceptional player. It is the first of a series of signings that you will get to know. Naturally, we want Messi to continue."

The news conference was perhaps a sign of what Aguero can expect at Barcelona, at least in the short term. Messi signing a new deal would bring a sense of calm to proceedings, as would clarity on the coaching situation.

Aguero is looking forward to playing with his compatriot on a week-by-week basis.

He said the prime motivation to join his new club was: "To be at Barca, where the best player in the world is.

"If he [Messi] continues here, which I think he will, we will try to do our best, as we have always done, in the national team."

Laporta could announce a new signing every day of this week – and he might yet, with Eric Garcia, Memphis Depay and Georginio Wijnaldum heavily linked – but the coaching situation also needs to be a priority.

Aguero steered away from recommending Guardiola's appointment, but spoke of his admiration for the City coach.

"We all know that Pep, since he arrived at City, has proposed a different football," Aguero said. "He proposes to keep the ball all the time and to keep that is important. It made me and the whole team better."

Injuries and a COVID-19 absence caused Aguero to miss chunks of the 2020-21 season, but he came through a medical on Monday and said his left knee, which was operated on last June, was "perfectly fine".

Messi has benefited from some outstanding forwards lining up alongside him during his Barcelona career, notably David Villa, Neymar and Luis Suarez.

Barcelona averaged 2.7 goals per game when Villa and Messi played together, and it was the same when Neymar played with the six-time Ballon d'Or winner, dipping to 2.6 when Messi and Suarez featured in the same side.

There are overlaps to bear in mind when looking at those figures, but not in the case of Villa who left Barca in July 2013, with Neymar arriving effectively as his replacement. Suarez then came in a year later from Liverpool.

Neymar departed for Paris Saint-Germain in August 2017, while Suarez was sold to Atletico Madrid last year.

Barcelona's win percentage stood at 74.1 per cent when Neymar and Messi played in the same team, 73.6 per cent with Villa and 73.2 per cent with Suarez.

Yet Barca's points per game were curiously slightly lower at 2.3 when Messi played with Neymar compared to when Suarez and Villa were in the team alongside the little maestro (2.4).

It was a sign of the times that Barcelona, led by Guardiola for two of Villa's three seasons, averaged 71.8 per cent possession while the Spain striker was at Camp Nou. When Messi and Neymar played together that figure was 67.2 per cent and when Messi and Suarez teamed up it was 65.3 per cent.

Messi, Suarez and Neymar frequently played in the same side, forming the feared 'MSN' forward line.

He said that "by no means do I consider that I should be a permanent starter" and said he would need to earn that status. Barcelona's squad includes Antoine Griezmann, Ansu Fati, Martin Braithwaite and Ousmane Dembele as forward options, while Messi, LaLiga's all-time record scorer, is an automatic pick.

"I talk to Messi every day. I can't tell you what we talked about. The last message [was one of] congratulations," Aguero said.