Sachin Tendulkar Hails Hima Das As An Inspiration For Youth; Others Give Teen Sensation Fitting Titles 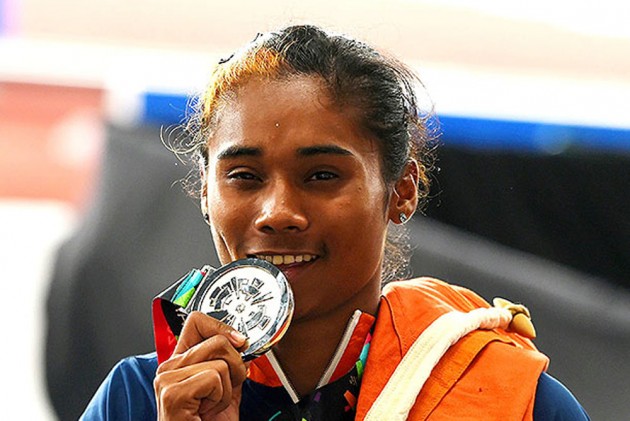 Hailing Indian sprinter Hima Das' sensational performance in the 19 days, cricket legend Sachin Tendulkar on Sunday called the teenager as "an inspiration for the youth".

Das, 19, set the European circuit on fire by winning five gold medals in 19 days. Popularly known as 'Dhing Express', the Asamese girl clocked a season-best time of 52.09 seconds in her pet competition, 400m, at the Nove Mesto nad Metuji Grand Prix on Saturday. Her personal best is 50.79 seconds, which she recorded at the Asian Games in 2018.

Tendulkar, who owned a centuries of hundreds in international cricket, took to Twitter and wrote: "Loving the way you have been running in the European circuit over the last 19 days. Your hunger to win and perseverance is an inspiration for the youth. Congrats on your  5 Medals! All the best for the future races, @HimaDas8."

Loving the way you have been running in the European circuit over the last 19 days.
Your hunger to win and perseverance is an inspiration for the youth.
Congrats on your 5 ðÂÂÂÂ¥ÂÂÂÂ Medals!
All the best for the future races, @HimaDas8. pic.twitter.com/kaVdsB1AjZ

Other celebrities also took to the popular social media platform to hail the athlete. Netizens came up with apporpriate superlatives like Super Girl, Golden Girl, etc to describe the Asian Games gold medallist.

There is no stopping for the golden girl of India, #HimaDas as she wins the 5th gold medal of the month! Congratulations to @HimaDas8 for such a spectacular performance & wish her continued success in the coming times!#HimaDasourPride pic.twitter.com/10ELuQtMtj

She, however, failed to qualify for the World Athletics Championships as the qualification mark for the 400 metre event is 51.80 seconds.

On Wednesday, Das had won the gold medal in the 200m race at the Tabor Athletics Meet.

In her first competitive 200m race of the year on July 2, Hima had clocked 23.65s to win gold at the Poznan Athletics Grand Prix, also in Poland.

Then on July 8, she won her second 200m gold at the Kutno Athletics Meet in Poland. Braving a sore back, the Assam runner had clocked 23.97 seconds to win the gold while Kerala runner V.K. Vismaya had grabbed silver with a timing of 24.06 seconds.

On July 13, she won her third 200m gold at the Kladno Athletics Meet in Czech Republic with a time of 23.43 seconds.