Home  »  Website  »  Sports  »  Rohit Sharma Living Up To Sachin Tendulkar's Expectation and How!

Rohit Sharma Living Up To Sachin Tendulkar's Expectation and How!

The highest aggregate in the previous 11 World Cups is 673 established by Sachin Tendulkar. Rohit Sharma is now leading scorer in 2019 World Cup with 544 runs in seven innings. 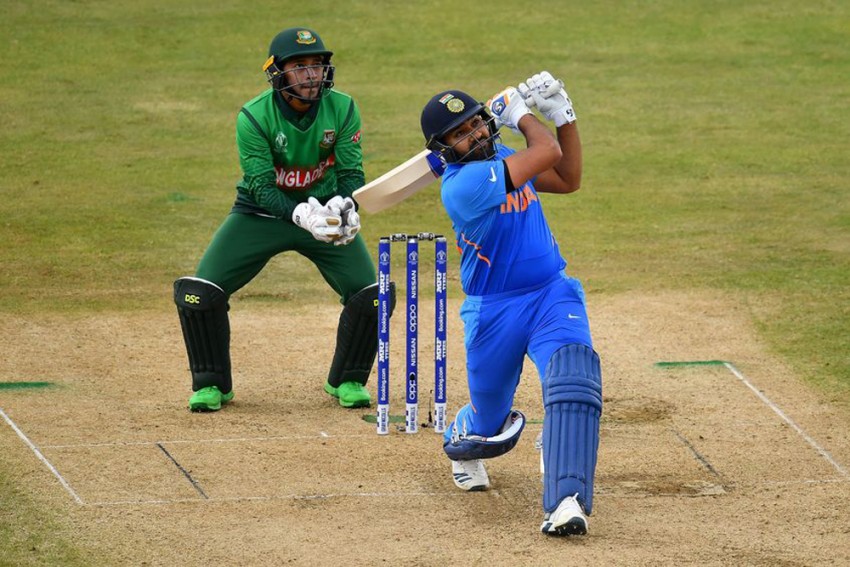 Rohit Sharma’s 104 at Edgbaston helped India to secure the win they needed to guarantee a place in the semi-finals of the ICC Men’s Cricket World Cup.
Getty Images
Outlook Web Bureau July 03, 2019 00:00 IST Rohit Sharma Living Up To Sachin Tendulkar's Expectation and How! 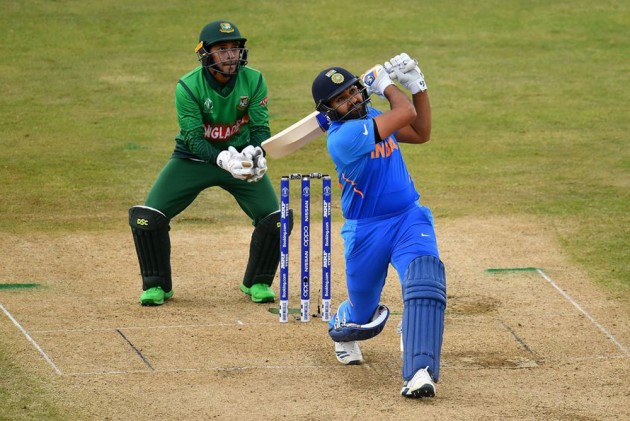 When Sachin Tendulkar retired after a memorable Test match farewell in Mumbai six years ago, he was asked which players might overtake some of his India records. The man known as the Little Master thought for a while and came back with two names. Virat Kohli was one, Rohit Sharma the other.

This gives an indication of the esteem in which Rohit Sharma was held even then, and over the past month he has underlined the qualities that prompted Tendulkar to deliver the opinion he did.

Rohit Sharma’s 104 at Edgbaston helped India to secure the win they needed to guarantee a place in the semi-finals of the ICC Men’s Cricket World Cup. At the same time, it confirmed the elimination of plucky Bangladesh.

On a personal level, Sharma’s innings also pulled him level with Kumar Sangakkara on four centuries for a tournament, equalling the achievement of the impish Sri Lankan in Australia and New Zealand in 2015.

Before his latest effort, Sharma had struck 122 not out against South Africa and 140 versus Pakistan, then taken 102 from the England attack on Sunday. In all four cases, he was dropped early but punished the opposition ruthlessly for their mistakes.

Since Shikhar Dhawan, his regular opening partner, was forced to return home injured, Rohit Sharma has simply forged another strong association with KL Rahul. Their stand of 180 against Bangladesh was the best for the first wicket of the tournament so far.

And his consistency means that one of Tendulkar’s records is, indeed, in sight.

Sharma is now the leading scorer in the competition with 544 runs in seven innings - two ahead of Shakib Al Hasan, whose dismissal to Hardik Pandya represented the beginning of the end for Bangladesh.

The highest aggregate in the previous 11 World Cups is 673 established by, yes, Tendulkar. That was in South Africa in 2003 when India reached the final with a stellar batting line-up also featuring Sourav Ganguly, Virender Sehwag, Rahul Dravid and Yuvraj Singh.

Figures support memories rather than create them, and Sharma has done more than please the statisticians in recent weeks. He has scored his runs with a mixture of force and style.

Two strokes in particular will not be forgotten by those lucky enough to bear first-hand witness at the grounds.

The first was at Old Trafford in India’s game against Pakistan, a flashing six levered over point off Hassan Ali that immediately drew comparisons with Tendulkar’s famous uppercut against Shoaib Akhtar in his lightning-fast prime at Centurion 16 years ago.

The second came here, at Edgbaston, off Mustafizur Rahman. Sharma appeared to do no more than push at a ball of full length, but the timing was so sweet that it disappeared off the very straightest bat, high over long off for six. Well might he have held the pose.

It was one of those moments that questioned the very principles of science. How could a ball travel so far with so little force seemingly applied? The answer can only lie in a combination of timing, muscle and technique.

Sharma is a strong man, stocky with forearms like hocks of ham. But he also has tungsten wrists that enable him to whip and work balls into gaps. Sometimes he plays as beautifully as VVS Laxman, sometimes as brutally as Kapil Dev.

We knew he was a good player even before the tournament. Of the eight ODI innings of 200 or more, Sharma has scored three, including the highest of all, 264 versus Sri Lanka in Calcutta five years ago.

But performances at the major events count most of all, and nothing in cricket matches a World Cup. He missed out when India lifted the trophy in 2011, omitted from the squad because of an untimely lull in form, but helped the side to the semi-finals in 2015.

Now, his side are through to the last four once again. Their support is loud, vibrant and plentiful, the one defeat, against England behind them.

And Rohit Sharma is in the form of his life.