Robert Lewandowski equalled Gerd Muller's record of 40 Bundesliga goals but Bayern Munich were held to a 2-2 draw by Freiburg on Saturday. 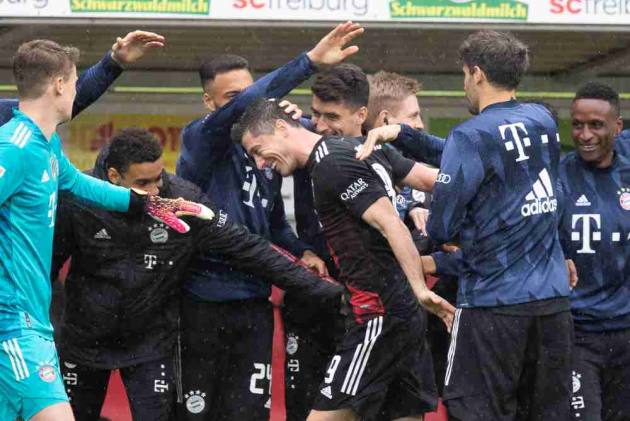 Robert Lewandowski equalled Gerd Muller's record of 40 Bundesliga goals in a single season as Bayern Munich were held to a 2-2 draw by a determined Freiburg on Saturday. (More Football News)

With a ninth-straight league title already sewn up, the focus for Bayern was all about Lewandowski's pursuit of a notable milestone that was set back in the 1971-72 season.

Lewandowski had closed in on the magical number with a hat-trick against Borussia Monchengladbach last time out, helping Hansi Flick's side celebrate being crowned champions in style with a 6-0 win at the Allianz Arena.

The Poland international matched the legendary Muller's haul thanks to a first-half penalty awarded following the involvement of the video assistant referee.

Robert Lewandowski adds another goal to his Bundesliga tally.

Here’s how he compared to Gerd Müller before this weekend. He’s now equalled his Bundesliga record of goals in a single season (40 in 1971-72). pic.twitter.com/2gY1dcsYe3

On-field official Florian Badstubner deemed Lukas Kubler had pulled down Thomas Muller at a corner after receiving a recommendation to review the incident, allowing Bayern's number nine to reach 40 from the spot.

The scorer received a guard of honour from Bayern team-mates and staff next to the visiting dugout in the immediate aftermath, though he failed to take two glorious chances late in proceedings that would have seen him move clear in the history books.

Less than three minutes after conceding the opener, Freiburg capitalised on a set-piece situation to draw level. Vincenzo Grifo's corner into the near post was met by Manuel Gulde, who beat Niklas Sule to the ball and flicked a header beyond Alexander Nubel – handed a first league start as Manuel Neuer watched on from the bench.

While Serge Gnabry had a tap-in finish ruled out for offside early in the second half, Bayern went back in front in the 53rd minute when Muller's volley across the face of the box was finished off by a sliding Leroy Sane.

However - after Mark Flekken had denied Lewandowski, who also scuffed another opportunity at to the goalkeeper - Freiburg captain Christian Gunter fired in a deserved equaliser to earn his side a point.

What does it mean? Record chase goes down to the wire

Lewandowski has one more game to add to his tally, Bayern rounding out their campaign - and also Flick's tenure as head coach - at home to Augsburg. His 40 goals so far have included eight penalties, five headers and four converted with his left foot.

In the long term, his target will be to chase down Muller and become the competition's all-time leading scorer. Lewandowski - who turns 33 in August - is still some way shy of the club icon's total of 365, though there is little sign of him losing his hunger for goals.

Had he shown just a little more composure, Lewandowski would already be out on his own. His inability to finish from ridiculously close range, stabbing an attempt with his left foot to the appreciative Flekken from almost next to the line, left him in a brief state of shock. Soon after, Freiburg did find the net at the other end to make it 2-2.

Bayern's back-up keeper had the odd shaky moment - he was fortunate that an offside call negated him potentially handling outside his area - but did make two pivotal saves after the interval, the second of which was similar to what you might expect from Neuer, snaking out a left foot to superbly deny Janik Haberer.

Bayern conclude their season in Munich against Augsburg next Saturday. As for Freiburg, they travel to Eintracht Frankfurt in the final round of Bundesliga fixtures.