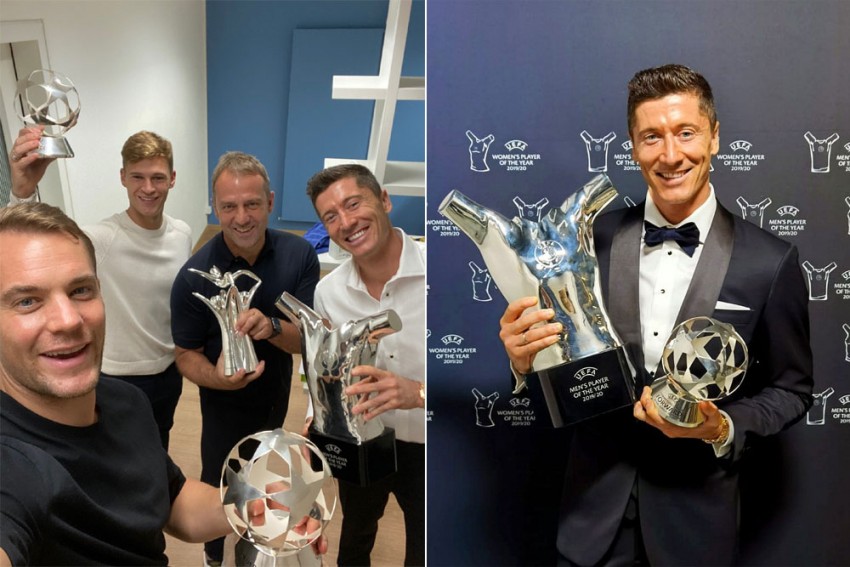 Lewandowski scored 55 goals last season, including 15 in the Champions League, and he collected the UEFA Men's Player of the Year prize, while Flick was presented with the Men's Coach of the Year honour.

Last season saw Bayern sweep the board with their Bundesliga, DFB-Pokal and Champions League triumphs to seal a stunning treble.

Former Germany assistant boss Flick took charge at Bayern in November after the team experienced a slow start to the season under predecessor Niko Kovac, and their results began to dramatically improve.

The German giants have already scooped UEFA Super Cup and DFL-Supercup victories in the early weeks of the new season, meaning they hold five significant trophies.

Lewandowski, who fended off competition from fellow nominees Manuel Neuer and Kevin De Bruyne, said of his award: "I have to say it's an amazing feeling.

"If you work so hard and you get this trophy it's something special."

The 32-year-old Poland international added: "I have to say thank you to my team-mates, my coaches and all the staff because they work very hard to prepare me, and also to my family because they support me a lot and that, for me, is very important.

"When I was young, I always dreamed of playing in the big stadiums, at the big clubs in the world, and now I'm on this stage I have to say the dream has come true. I'm very proud, I'm very grateful and I'm very happy."

The individual accolades are a welcome complement to the team successes, and they are flooding in at Bayern.

Lewandowski won Germany's Footballer of the Year award in August after his remarkable campaign, with Flick named as the top coach in the country.

Now they have fresh recognition from European football's governing body, the organisers of the Champions League, and it was a Bayern love-in at the UEFA ceremony.

Neuer received the Goalkeeper of the Year trophy, the versatile Joshua Kimmich picked up the Defender of the Year honour and Lewandowski went home with the Striker of the Year prize alongside his main award.

It was not quite a clean sweep by the Bavarians, however, with Manchester City's De Bruyne taking the Midfielder of the Year accolade.