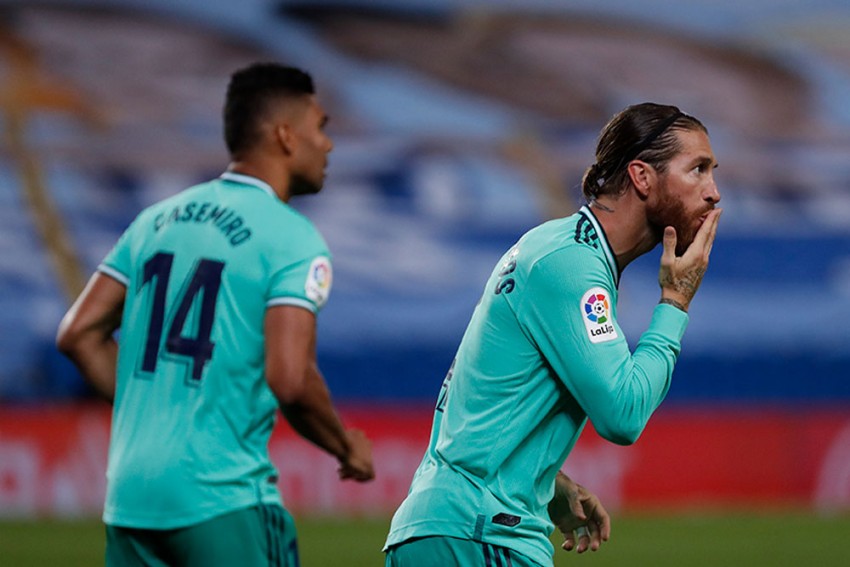 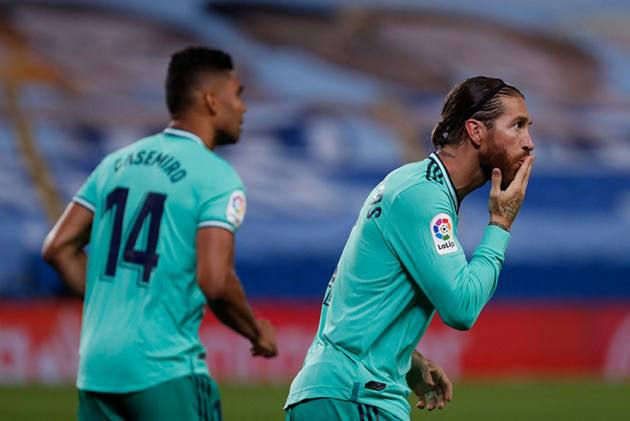 Real Madrid climbed above Barcelona at the top of LaLiga as second-half goals from Sergio Ramos and Karim Benzema clinched a 2-1 win over Real Sociedad.

Barca's goalless draw with Sevilla on Friday handed Zinedine Zidane's men the chance to leapfrog their rivals at the summit - and they duly seized the opportunity with a hard-fought triumph on the road.

Ramos put Madrid in front from the penalty spot five minutes into the second half, while Benzema added a second less than two minutes after Adnan Januzaj had a goal controversially ruled out for Sociedad.

The visitors lost Ramos to injury and were given a scare when Mikel Merino pulled one back seven minutes from time, but they held on to make it three wins from three since the restart and overtake Barcelona by virtue of a superior head-to-head record.

Madrid took nearly an hour to get going in their 3-0 win against Valencia last time out and it was a similar story here against top-four hopefuls Sociedad.

Vinicius Junior fired over from a good position inside 110 seconds and was then denied by Alex Remiro late in the first half, either side of Benzema's low effort being kept out.

But Madrid did not have to wait too long into the second half to find a breakthrough, Vinicius tripped by Diego Llorente as he was about to shoot after gliding past two players.

Ramos made no mistake from the spot, the skipper equalling his best-ever LaLiga goals haul of seven by sending Remiro the wrong way.

Madrid lost their captain to an apparent knee injury 10 minutes later and nearly suffered a bigger blow when substitute Januzaj picked out the corner with a low drive, only for Merino - deemed to be in Thibaut Courtois' line of sight - to be adjudged offside.

Sociedad's pain was doubled when Benzema brought down Federico Valverde's cross and fired home, the goal allowed to stand despite a VAR check for a possible handball by the Frenchman.

And despite an unmarked Merino thumping home at the back post, Madrid saw things through to keep their momentum going.

What does it mean? Advantage Madrid in tight title tussle

Barcelona looked well below par in their stalemate with Sevilla two days ago and Madrid made them pay with this well-earned victory.

Zidane's side are level on 65 points with their bitter rivals but edge in front after taking four points from the two Clasico encounters earlier in the campaign.

Vinicius steps up for Madrid

Brought into the side for the rested Eden Hazard on the left of Madrid's front three, Vinicius was the visitors' liveliest player in the first half and won the penalty for the key breakthrough soon after the restart.

James unable to take his chance

It is no secret that James is not fancied by Zidane, this the Colombia international's first league start since October. He offered little during his 78 minutes on the field and may well have to wait a little while for his next opportunity to impress.

The games keep coming thick and fast for both sides, with Madrid hosting Real Mallorca on Wednesday and Sociedad at home to Celta Vigo the same day.