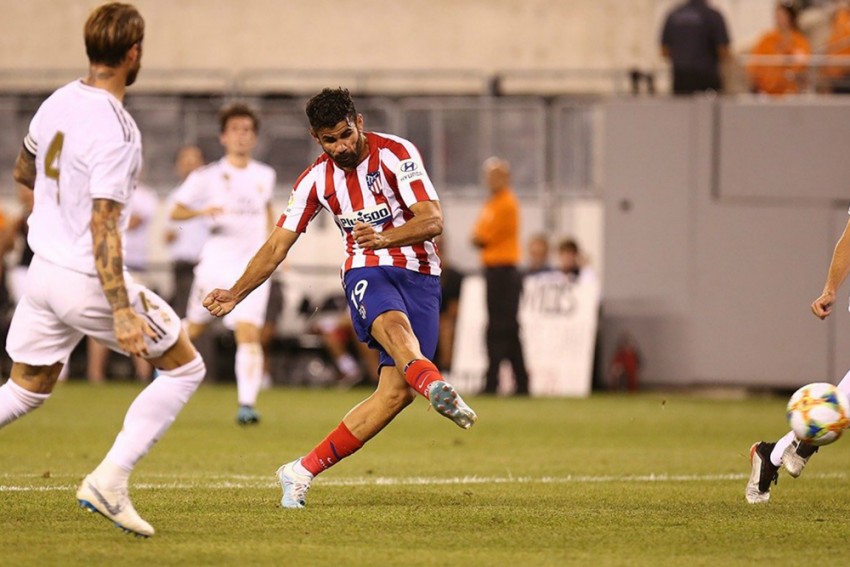 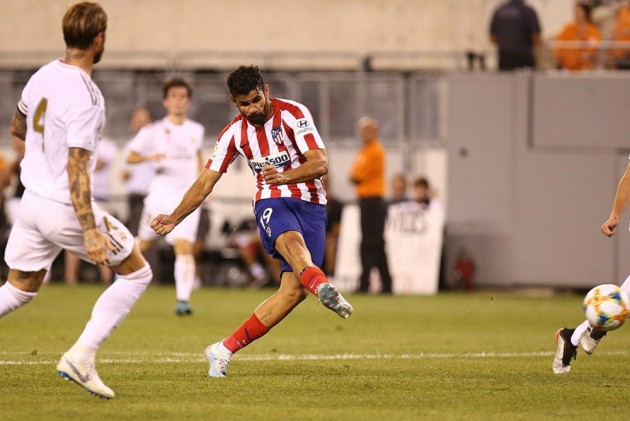 Atletico showed no mercy in New Jersey, where Diego Simeone's men led 5-0 at half-time thanks to Costa's first-half hat-trick on Friday.

Big-money signing Joao Felix scored his first goal since arriving from Benfica and set up two others, while Angel Correa was also on target in a sensationally one-sided first half at MetLife Stadium.

Costa teamed up with Joao Felix to add his fourth six minutes into the second half before he was sent off after clashing with Dani Carvajal, which sparked a melee.

Vitolo scored a sensational solo goal in the 70th minute after Nacho Fernandez reduced the deficit on the hour-mark, while Madrid substitute Karim Benzema converted an 85th-minute penalty and Javi Hernandez bundled the ball over the line late.

Atletico were ruthless from the outset, last season's runners-up breaking the deadlock after just 43 seconds when Joao Felix played a neat pass to Costa, whose deflected shot beat Thibaut Courtois.

That was a sign of things to come as Joao Felix made it 2-0 less than seven minutes later – the former Benfica teenager stepping in front of Marcelo and side-footing from close range after Saul Niguez cut a pass back into the penalty area.

After a lively Alvaro Morata left the field due to an apparent calf injury, his replacement Correa – linked to AC Milan – put Atletico 3-0 ahead in the 19th minute with a volley past Courtois.

While Joao Felix and Costa continued to wreak havoc, Madrid's woes were compounded by what appeared to be a knee injury to new signing Luka Jovic, who had to be substituted following a collision with Atletico goalkeeper Jan Oblak.

Madrid's defensive problems were highlighted again as Atletico went 4-0 ahead in the 28th minute – Saul winning the ball after a bad pass from Ramos and sliding in a simple pass for Costa and he made no mistake.

Hermoso and Thomas Lemar also went close, while Vinicius Junior hit the post for Madrid. But Atletico netted their fourth on the stroke of half-time after Costa completed his hat-trick from the penalty spot following Isco's foul.

Atletico did not take their foot off the pedal in the second half – Felix and Costa continuing their frightening combination as the former split Madrid's defence with a delightful pass and the former scooped the ball over Keylor Navas in the 51st minute.

Eden Hazard was virtually non-existent in first half, but the Belgian star showed a flash of brilliance to help Madrid pull a goal back on the hour-mark, crossing the ball into the six-yard box for Nacho to bundle the ball over the line.

There was a flashpoint five minutes later when Costa and Carvajal were both sent off after the pair and both teams came together as tempers threatened to boil over.

It got worse for Madrid after Vitolo won the ball from two defenders on the half-way line and beat another two opponents before finding the back of the net following a stunning solo run with 20 minutes remaining.

Atletico were hungry for more and they should have scored another two or three goals but some desperate goalkeeping and defending denied Los Rojiblancos, while Benzema and Hernandez added goals for Madrid late in the game.