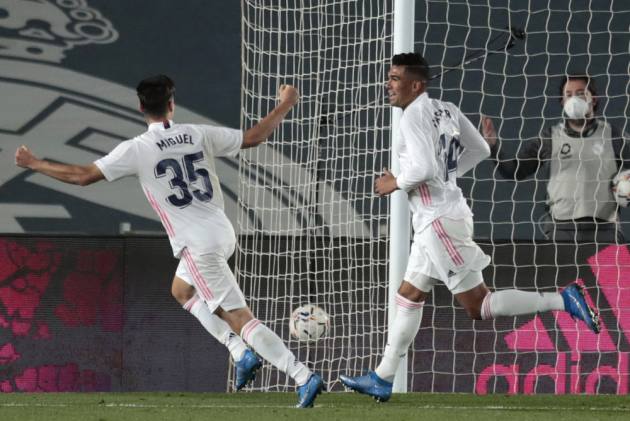 A thrilling LaLiga title race looked to be turning in Atleti's favour after a spirited Osasuna display held Madrid at bay for much of Saturday's late game, but Zinedine Zidane's team struck in the 76th minute.

Militao, who had previously been denied by Sergio Herrera, headed home from Isco's delivery to snatch a vital win and pull Los Blancos within two points of leaders Atleti, keeping up the pressure on Barcelona and Sevilla in the meantime.

It was a cruel blow for Osasuna, who had looked in good position to end a 16-year losing streak at Madrid, and Casemiro's fortuitous finish sealed the result.

Making his first start since January, Eden Hazard had an early sighter, curling over the corner of the goal after a driving run from the left.

Hazard went closer still in the 26th minute, drawing a brilliant save from Herrera with a close-range volley.

Herrera pulled off another superb stop from the resulting corner, flicking Militao's goal-bound header over, with Vinicius Junior slamming into the side netting soon after.

13 - @realmadriden have made 13 shots vs Osasuna at the half time, more than any other first half in a single game for them in all comps being the local team to have made the most shots without scoring in this half in #LaLiga this season level with Barcelona vs Levante(13). Edge pic.twitter.com/V2ILqOoJpy

Osasuna thought they had pinched the lead on the stroke of half-time, only for Chimy Avila's fine header to be disallowed for offside.

Militao flashed an acrobatic attempt over the bar after the restart, with substitute Rodrygo Goes arrowing a crisp effort just wide in the 67th minute.

Coach Zidane soon turned to Isco, and the playmaker immediately repaid the faith, clipping in a corner from which Militao sent a towering header into the right corner.

The points were sealed four minutes later – Karim Benzema slipping a neat pass through for Casemiro, whose heavy first touch wrong-footed Herrera and rounded off a hard-earned win.

What does it mean? Thrilling race going down to the wire

No team can pull substantially ahead at the moment in LaLiga, in what is a four-way tussle at the top.

Sevilla and Barca are still to play this weekend, and Madrid have taken a stride towards consolidating second place for now, with their attention now turning to the midweek Champions League semi-final second leg against Chelsea.

With Atleti and Barca meeting next week, Madrid could well go top if that match is a draw, though they will have to beat dark horses Sevilla.

Militao gets the ball rolling

With special consideration to Isco, who has been involved in seven goals in his last six LaLiga games against Osasuna, Militao delivered a standout display for Madrid.

His goal capped an excellent individual display, in which he recorded a joint team-high three clearances and two interceptions, while he registered 96 touches, the most on the pitch.

Varane switch a cause for concern?

Madrid have been depleted in defence in recent weeks, and having only just come back from a stint out due to a positive COVID-19 test, Raphael Varane went off at half-time.

It may well have been a premeditated change, with Zidane perhaps having half an eye on the Chelsea match, but if not it could be a worrying footnote for Madrid.

- Militao scored the second goal of his Real Madrid career (36 appearances), the first since January 2021 against Alcoyano in the Copa del Rey.
- Madrid are unbeaten in their last 12 matches against Osasuna in LaLiga (W9 D3), since a 1-0 away loss in January 2011, their best run without a defeat against them in the competition.
- Casemiro has scored seven goals this season in all competitions, equalling his best tally in a single campaign for Real Madrid (seven in 2017/18).
- At home, Madrid have won their last 11 games against Osasuna in LaLiga, scoring an average of 3.2 goals per game - the last time they lost any points at home against them in the competition was in December 2005 (1-1).
- Benzema has been involved in 12 of Real Madrid’s last 15 goals in LaLiga (nine goals and three assists). Indeed, the French striker has been involved in five goals in his last four home games against Osasuna in the competition (three goals and two assists).
- Madrid have kept a clean sheet in each of their last four LaLiga games, their best run without conceding in the league this season.
- Thibaut Courtois has saved 21 of the last 22 shots on target he has faced for Real Madrid in LaLiga, conceding just Oscar Mingueza's goal for Barcelona in El Clasico.

Madrid are fighting on two fronts, and they travel to London to face Chelsea on Wednesday. Osasuna play Athletic Bilbao next Saturday.