Real Madrid left it late to claim a point at home to Real Sociedad, though it does them little good in their failing title defence 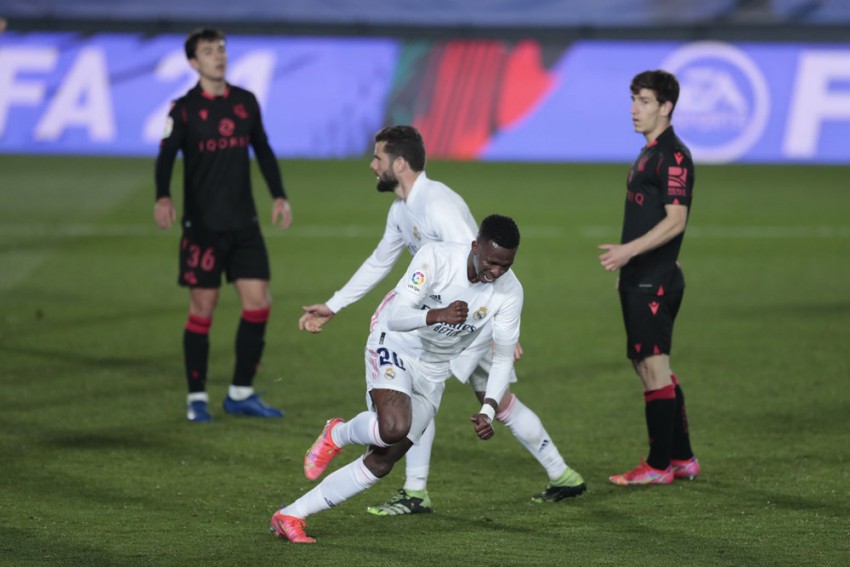 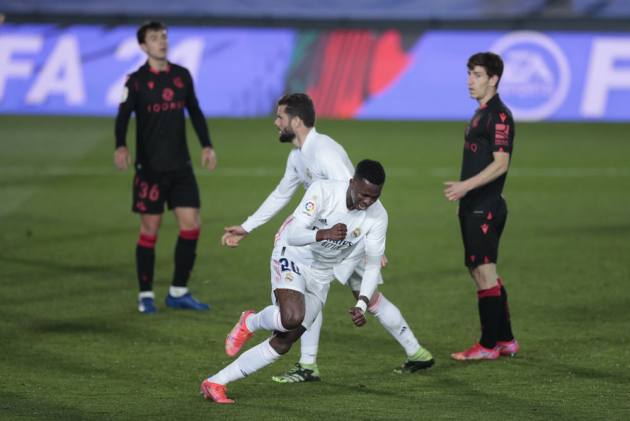 Vinicius Junior salvaged a point for Real Madrid late on in Monday's 1-1 draw at home to Real Sociedad, though the result does little to alleviate the pressure ahead of this weekend's potentially vital derby clash with Atletico Madrid. (More Football News)

Zinedine Zidane's men looked to be heading towards a defeat that could have delivered a devastating psychological blow ahead of arguably their biggest game of the season, but Vinicius spared them near the end.

The hosts had the better of the first half and should have led when Mariano Diaz – again deputising for the injured Karim Benzema – inexplicably hit the frame of the goal, and La Real were emboldened by that as Portu gave them the lead with 55 minutes played.

That looked destined to be the winner and potentially the goal that ended Madrid's dwindling title hopes, yet Vinicius got them back on level terms with a minute left, albeit they still end the matchweek a further two points adrift of leaders Atletico.

La Real goalkeeper Alex Remiro then proceeded to frustrate the hosts, first blocking a Ferland Mendy effort with his foot before parrying Luka Modric's attempt just before the interval.

The champions were made to rue their profligacy early in the second period, La Real working the ball well to Nacho Monreal on the left and his inch-perfect cross was met by a wonderful Portu header that picked out the top-far corner.

They should have made it 2-0 soon after but Alexander Isak could not reach Portu's squared pass, and Madrid subsequently wasted a glorious chance of their own – Casemiro heading off target.

Madrid did eventually restore parity as Vinicius turned in Vazquez's low cross in the dying stages. Still, they remain five points adrift of Atletico having also played a game more.

What does it mean? Do or die in the derby

If Madrid had followed up a win here with another in the derby, they would have been level with their local rivals, setting up a mouthwatering title race.

However, now not only do they probably need to beat Atletico, they need several favours from other teams before the end of the season. While Diego Simeone's men have recently shown signs of wobbling, Madrid surely will not expect that to be a continuing factor, particularly if they are eliminated from the Champions League by Chelsea.

Vinicius' equaliser certainly improves their position slightly, but even withstanding injuries, this was hardly the performance of a team that looks destined to push Atleti all the way.

He has not always been the most popular Madrid player among fans, but it is fair to say Vazquez has proven himself dependable time and time again in 2020-21 - and this game was no different. It was no surprise to see the equaliser come from one of his deliveries and, on another day, he would have had two assists were it not for Mariano's remarkable miss. Those were just two of his five key passes – not only was that a match high, but he has only ever provided more in a single game three times in his Madrid career.

While one would not necessarily expect Mariano to be involved all the time, given he was playing as Madrid's focal point, his 13 touches was the second fewest of all Blancos players, including substitutes. He was so detached from their play that he was essentially anonymous, and the one occasion he had to truly make the difference, he hit the bar from a matter of yards out.

It is the big one for Madrid, as they go to the Wanda Metropolitano on Sunday for a game that could well make or break their season. La Real are at home to Levante the same day as they look to improve their bid for a top-four finish.