Liverpool are within a point of the top four in the Premier League after deservedly defeating Arsenal at Emirates Stadium. 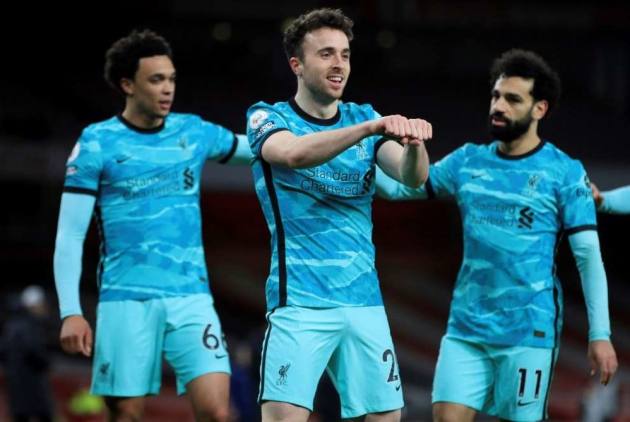 Diogo Jota had a big impact from the bench as his brace set Liverpool on their way to a precious 3-0 win at Arsenal on Saturday. (More Football News)

The defending Premier League champions closed to within two points of the top four with victory after Chelsea were remarkably thrashed 5-2 at home by West Brom earlier in the day.

It was a huge opportunity that looked like passing Liverpool by as they lacked imagination in the final third for the first hour.

But with Arsenal providing uninspiring opposition, Jurgen Klopp turned to his bench and Jota required just over three minutes after coming on to forge the breakthrough with a thumping header.

A swift second followed from Mohamed Salah and Jota was on target again for the third, ensuring the Reds moved firmly back into the race for Champions League qualification.

4 - Diogo Jota has scored four Premier League goals against Arsenal, against no side has he netted more in the competition. Poacher. pic.twitter.com/klF3AHWWJO

Liverpool had dominated from the outset but were restricted to shots from distance until the 35th minute when James Milner passed up a glaring opportunity.

Trent Alexander-Arnold reached the byline and cut a ball back to the unmarked stand-in Liverpool skipper, who pulled a firmly struck effort wide with Bernd Leno seemingly beaten.

A difficult first half for Arsenal ended with Kieran Tierney departing through injury, before the second period brought only marginal improvement in the home ranks.

Klopp sensed the opportunity, made an attacking change - replacing Andy Robertson with Jota - and was quickly rewarded as the substitute beat two defenders to a sublime Alexander-Arnold cross.

Salah, stifled until then, suddenly found space down the right and advanced to roll a finish under Leno to take the game away from Arsenal.

Leno produced a right-handed save from the same man soon afterwards, but an awful Gabriel Magalhaes pass let the visitors in again and Jota blasted past the goalkeeper.

What does it mean? Liverpool back in the hunt

Although Liverpool and Arsenal each have big European games to come in the week - the Reds in the Champions League, the Gunners in the Europa League - Klopp insisted his focus would not drift from Saturday's match. Chelsea's result surely only solidified that approach.

Anything other than three points for Liverpool, who bossed 64 per cent of the possession, would have represented a major disappointment. Fortunately, they could call on super-sub Jota, who has a league-high four goals from the bench this season.

Klopp said ahead of this game Alexander-Arnold's form this season "cannot be the reason" he was left out of the England squad in March, a decision that clearly irked the Liverpool manager.

On this evidence, Gareth Southgate might struggle to disagree.

Alexander-Arnold created a game-high four chances, including the best opening of the first half and the vital breakthrough goal with 26 minutes to play. He then won the ball - one of three interceptions - for number three.

Criticism of Alexander-Arnold's play has mainly centred on his defensive deficiencies, but he was scarcely tested by direct opponent Pierre-Emerick Aubameyang.

The Arsenal captain did not muster a single attempt and won only two of nine duels before making way 13 minutes from time - presumably with one eye on the Slavia Prague tie, although his performance cannot have helped his cause.

- Each of Liverpool's last six Premier League victories have come away from home. In their league history, this is only the second time they have had such a run ( February-August 1955).
- Premier League matches between Arsenal and Liverpool have now produced 169 goals, more than any other fixture in the competition's history.
- Arsenal have only picked up one victory from their last 12 Premier League matches against Liverpool (W1 D4 L7).
- Liverpool have registered their biggest ever margin of victory in an away top-flight match against Arsenal.
- Salah has been directly involved in nine goals in nine Premier League appearances against Arsenal, scoring seven and assisting two more.
- This was Mikel Arteta's 50th Premier League game in charge of Arsenal (W21 D12 L17), with the Spaniard losing four more games than his predecessor Unai Emery (13) after his first 50 games in the competition.