Willian and Gabriel enjoyed encouraging debuts as Arsenal won 3-0 at Fulham, who endured a poor first match back in the Premier League 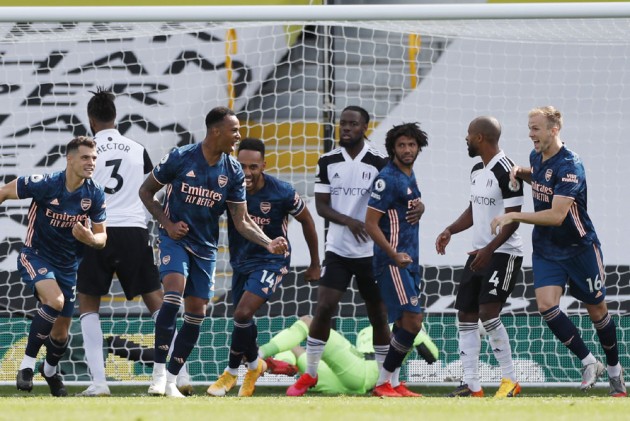 Arsenal made a convincing start to the new Premier League season as debutants Willian and Gabriel impressed in a 3-0 win at Fulham. (More Football News)

Mikel Arteta's side lost their final two away league games of 2019-20 to Tottenham and Aston Villa, but victory at Craven Cottage was comfortably in their grasp as soon as Lacazette struck eight minutes in to become the first player to score the first goal of a Premier League season on two occasions.

Scott Parker's men enjoyed nearly half of the possession but offered scant threat to the Gunners' goal as the challenge facing last season's Championship play-off winners was laid bare.

Fulham started positively but fell behind in disappointing fashion, Lacazette tapping in after Marek Rodak had saved from Willian, all after Aubameyang had been allowed to chase and retrieve a loose ball in the hosts' box.

Willian almost scored his first Arsenal goal with his first shot, the Brazilian striking the base of the left-hand post from a free-kick on the edge of the box.

Gabriel, who been largely untroubled in defence in the first half, made a telling contribution at the other end four minutes into the second half, diverting Willian's corner past Rodak with his shoulder.

It was 3-0 before the hour mark, Willian switching play to Aubameyang after winning back the ball in the Fulham half and the Gunners striker curling a fine finish into the top-right corner.

Michael Hector cleared off the line to deny Aubameyang a second and prevent Fulham's first game back in the top flight from becoming worse.

2 - Willian is the first player to assist two goals on his Premier League debut for Arsenal since @RealRomfordPele in August 1992 against Liverpool. Provider. #FULARSpic.twitter.com/7RYsFaHRgn

What does it mean? Refreshed Gunners taking shape

Arteta will be delighted with the way Willian and Gabriel performed on debut, the former earning two assists - the first Arsenal player to do so on debut in the top flight since Ray Parlour in 1992 - and completing all but one of his 26 passes.

The game also means Arsenal have lost just once in seven competitive matches and ended a two-game losing run away from home in the league.

Fulham will need to improve sharply if their stay back in the Premier League is going to be a long one - they failed to muster a single shot on target until a tame effort from substitute Aleksandar Mitrovic 67 minutes in.

Although he was barely stretched by an insipid Fulham attack, this was an encouraging debut from new signing Gabriel.

He made two tackles, three clearances and a team-high 107 successful passes and deserved a bit of luck from Willian's corner as he became the 10th Arsenal player to score on his Premier League debut.

Hector struggled all day to keep Aubameyang in check and he was a little fortunate not to receive a second booking for blocking the striker's promising run, although he did manage one key block.

11 - Fulham have lost their last 11 top-flight London derbies – including 10 defeats in the 2018/19 season – the longest ever run by a club in top-flight history. Worry. #FULARSpic.twitter.com/BYItVNMMMs

- Fulham have lost their past 11 top-flight London derbies – including 10 defeats in the 2018-19 season – the longest ever run by a club in top-flight history.
- Arsenal have won on MD1 in consecutive seasons for the first time since 2009-10 (three in a row).
- Eleven Brazilians have now appeared for Arsenal in the Premier League, following club debuts for Gabriel and Willian, with only Chelsea and Manchester City boasting more (12 each).
- Alexandre Lacazette has netted four goals in three Premier League appearances against Fulham, more than against any other side in the competition.

Arsenal host West Ham next Saturday, while Fulham are in EFL Cup action at Ipswich Town in four days' time.