Tottenham slumped to a home defeat to Aston Villa in their first game since reports emerged Harry Kane wants to leave the club at the end of the season. 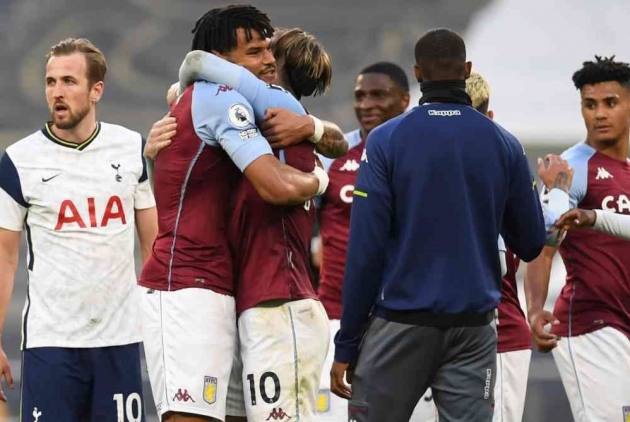 Tottenham slumped to a 2-1 home defeat against Aston Villa in their first game since reports emerged Harry Kane is intent on leaving the club at the end of the season.  (More Football News)

Kane, who has been linked with a move to a host of Premier League rivals, was a peripheral figure as Spurs suffered a second defeat in three top-flight games in front of 10,000 returning fans at the Tottenham Hotspur Stadium following the loosening of coronavirus restrictions.

Steven Bergwijn had put Ryan Mason's side ahead with his first goal of the season, but a spectacular Sergio Reguilon own goal and an Ollie Watkins strike before half-time put the visitors ahead.

While Spurs improved after the interval, they never really looked like finding a goal that would have prevented Dean Smith's side securing just a second win against them in their last 14 matches.

Tottenham went ahead in the eighth minute when Bergwijn picked Marvelous Nakamba's pocket, powered into the penalty and unleashed a superb half-volley past Emiliano Martinez.

Watkins was convinced he should have been given a penalty soon after when Hugo Lloris clattered into him, but referee Craig Pawson and VAR were unmoved.

The visitors pulled level in slapstick fashion after 20 minutes, however, when Reguilon inexplicably sliced Nakamba's cross into his own net from 15 yards.

It went from bad to worse for the Spanish left-back six minutes before the interval, Watkins slotting in from close range after his attempted pass had been cut out by Bertrand Traore.

Martinez twice denied Bergwijn inside the opening five minutes of the second half, while Traore curled wide for Villa after a swift counter-attacking move on the hour mark.

Kane's first shot did not arrive until the 75th minute, Martinez keeping him out at his near post.

Tottenham's home campaign this season ended with a whimper and Villa debutant Carney Chukwuemeka struck the post in the best chance of the final moments.

What does it mean? Problems stacking up for sorry Spurs

Keeping hold of Kane is understandably the priority for Spurs during the off-season, but this display showed there are plenty of other issues for the new manager to address when he is appointed.

The hosts were dismal at the back, allowing Villa a whopping 20 shots, and looked bereft of creativity in support of the isolated Kane.

It is a result which means they can no longer finish any higher than sixth in the Premier League this season, while the win ensured Villa will end the campaign in 11th.

Watkins' excellent debut season for Villa continued with another lively display. He was unlucky not to win a penalty early on, while his goal made him the joint-highest scoring Englishman in a Premier League season for Villa, along with Julian Joachim in 1998-99 (14 goals).

Reguilon costs his side dear

The former Real Madrid defender endured a nightmare first half, following up his emphatic own goal - the first of his top-flight career - with a dismal pass that led to Villa's second. It was the kind of display that might lead a new manager to assess other options in that position.

- Spurs suffered their first home Premier League defeat under Mason and their sixth overall this season, their most in a league campaign since also losing six in 2014-15.
- Villa won their ninth away Premier League match of the season, their most in a single campaign since winning nine in 2009-10 under Martin O’Neill.
- Watkins has scored 14 Premier League goals this season, the most by a player in their debut season in the competition since Alexandre Lacazette in 2017-18 (also 14).
- Bergwijn scored his fourth Premier League goal for Tottenham, with all four coming at home and each goal coming as the opening goal of the match.
- Villa registered their first away Premier League win when conceding the first goal since August 2013, when they won 3-1 at Arsenal – they had been winless in 52 such matches before this win (D5 L47).
- Spurs have conceded three own goals in home league games this season, their most ever. They had only conceded one own goal at home in their previous 11 seasons combined.

Both sides finish their Premier League campaigns on Sunday, with Spurs travelling to Leicester City and Villa hosting Chelsea.