In a rain-interrupted match decided under the Duckworth-Lewis system, New Zealand replied with 176-5 to the West Indies' total of 180-7 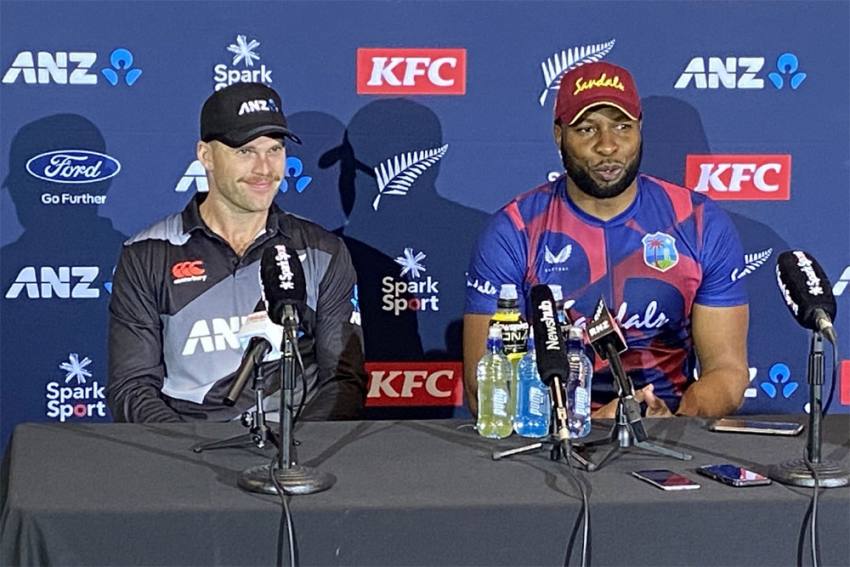 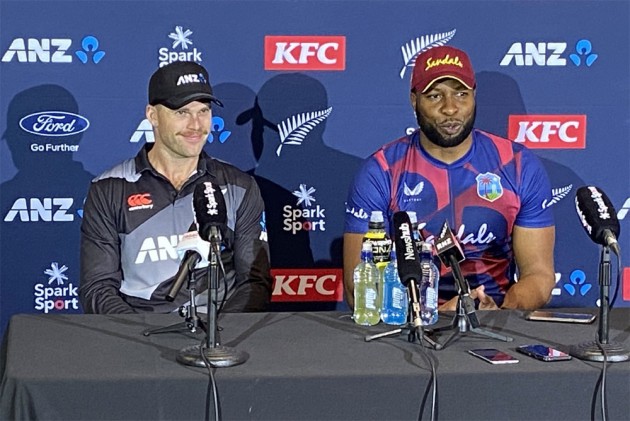 A savage spell of fast bowling from Lockie Ferguson and an unbeaten 48 from Jimmy Neesham propelled New Zealand to a five-wicket win over the West Indies in the series-opening Twenty20 international on Friday. (More Cricket News)

Neesham produced his highest score in T20 internationals and combined in partnerships of 77 with Devon Conway (41) and 39, unbroken, with Mitchell Santner (31 not out) to see New Zealand home with four balls to spare.

In a rain-interrupted match decided under the Duckworth-Lewis system, New Zealand replied with 176-5 to the West Indies' total of 180-7.

The West Indies owed their competitive total to captain Kieron Pollard, who scored a career-best 75 not out from 37 balls.

Pollard added a powerful finish to a West Indies innings reduced by rain to 16 overs, striking four sixes and eight fours to lift his team to 180-7 as it batted first after losing the toss.

In an innings which ebbed and flowed around three rain breaks, the West Indies blasted their way to 58 without loss after 3-2 overs, then lost five wickets for one run in the face of Ferguson's onslaught.

Ferguson, who was a hot property in this season's Indian Premier League, was only released from managed isolation on his return to New Zealand on the day before the match.

He took a wicket with his first ball, added another in the same over and ended with 5-21 — becoming only the second New Zealander after Tim Southee to take five wickets in a T20 international.

"I thought the boys started out okay," Ferguson said. "A bit of bad luck happens at this ground.

"It's one of the craziest grounds to play at — the ball flies everywhere and today for me it went to hand. I was happy with the way the boys chased it down there."

Pollard recovered the West Indies effort with an innings which eclipsed his previous-best T20 international score of 68. He blasted sixes onto the roof and to all parts of Eden Park, which contained a large crowd.

The tourists were happy with their total, but New Zealand methodically chased it down.

South Africa-born Conway, in his debut, played a stabilizing role after New Zealand slipped to 63-4 with the run out of veteran Ross Taylor. He first established a partnership with Glenn Phillips who made 22 and batted on despite dislocating his knee.

New Zealand were 140-5 on Conway's dismissal and Neesham and Santner were able to keep up the high run rate necessary to see the home team to only its second win in its last 11 matches in Auckland.

The rain that doused Eden Park on Friday, sending players from the field for the first time after only four balls had been bowled, failed to douse an extraordinary match.

Openers Andre Fletcher and Brandon King gave the West Indies and explosive start to their innings as New Zealand turned in a wayward bowling display. New Zealand captain Southee sent down wides with the first two balls of the match and Fletcher, especially, cashed in.

He hit successive sixes from the first two balls of the second over and his flow wasn't disturbed when players again were chased from the field by a shower when the West Indies were 26-0.

His best shot may have been a pulled six off Hamish Bennett who gave up 29 runs from the third over.

Southee called on Ferguson as his second change in the fifth over and he made an instant impact, bowling Fletcher with a searing first delivery. He maintained pace in excess of 150kmh (93mph) through his two spells during which the West Indies slumped from 58-0 to 59-5.

"I hope the crowd enjoyed it. I think it was fantastic cricket in terms of the ball flying all round the boundaries," he said.

"It was a topsy-turvy sort of game and a bit of indiscipline showed with us in the bowling side of things."