Arsenal need a win on the final day of the Premier League season to have a chance of claiming a place in Europe next season. 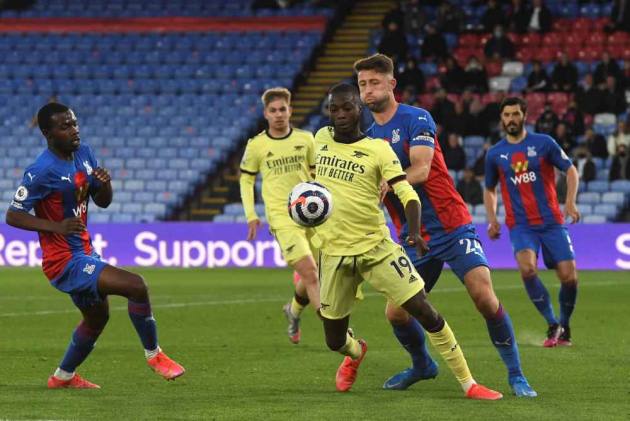 Brazilian teenager Martinelli came off the bench to rescue his side, who are ninth on 58 points and remain in with a chance of a top-seven finish with one game left of the Premier League campaign.

But Arsenal's attacking quality shone through as Martinelli tipped the game back in their favour before Pepe added a third with a superb individual effort.

19 - Aged 19 years and 335 days, Gabriel Martinelli is the youngest ever player to score a 90th minute winner for Arsenal in a Premier League game. Fearless.

Arsenal dominated a heated first half but had to withstand dangerous Palace breaks, Benteke heading narrowly over the crossbar moments before he teed up Jeffrey Schlupp for a fierce shot that Bernd Leno parried away.

But the hosts fell behind 10 minutes before the interval when Bukayo Saka linked up well with Kieran Tierney, whose cross was volleyed into the net from six yards by the leaping Pepe.

Just after the hour mark, Palace won a free-kick that Andros Townsend swung in from the left and Benteke met it with a diving header that beat Leno low to his right.

Palace were pushing for a winner in the dying minutes when Martin Odegaard crossed for fellow substitute Martinelli to lift the ball over goalkeeper Vicente Guaita and poke it into the net from close range.

Pepe then rubbed salt in Palace's wounds, dribbling through the hosts' penalty area before sending a low drive into the far corner of the net to secure a result that flattered Arsenal.

What does it mean? Arteta prepares for big final day

The last time the Gunners failed to qualify for either of the two major European competitions was 1995-96, and anything other than a win against Brighton and Hove Albion is likely to see them miss out again. Even a win might not be enough as the Gunners jostle with three teams above them – bitter rivals Tottenham, Everton and West Ham – with sixth leading to a Europa League spot and seventh place earning passage to the Europa Conference League play-off round.

Pepe at the double

Only Alexandre Lacazette (20) and Pierre-Emerick Aubameyang (19) have been involved in more goals for Arsenal in all competitions this season than Nicolas Pepe, who took his tally to 19 – 14 goals and five assists.

This was the first time the Eagles have lost their final home game of a Premier League season and they were at times overrun in midfield, where Schlupp won just two of his eight duels .

The curtain falls on Hodgson's four-year tenure as his side take on Liverpool at Anfield, while Arsenal are at home to Brighton on the final day.