Navdeep Saini, who made his international debut this year, suffered a groin injury during Delhi’s Vijay Hazare encounter against Himachal Pradesh held on October 17 in Vadodara. 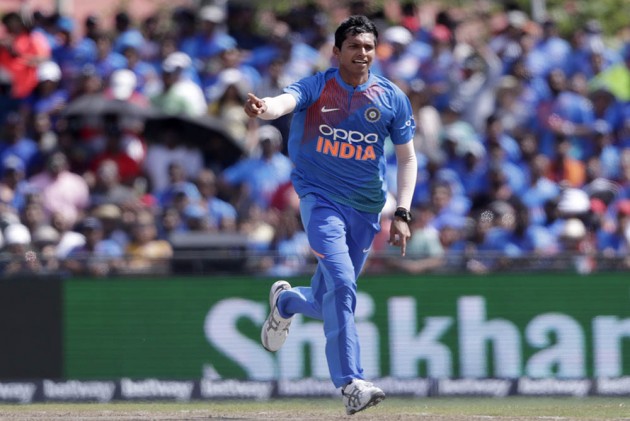 India pace bowler Navdeep Saini, who suffered a groin injury during the Vijay Hazare Trophy, is expected to be fully fit for the home series against the West Indies, starting December 6. (CRICKET NEWS)

“I’m recovering well. I have started bowling and luckily didn’t experience any discomfort. Hopefully, I’ll be there (in contention for selection),” Saini told Outlook.

Saini, who made his international debut this year, sustained the injury during Delhi’s encounter against Himachal Pradesh, held on October 17 in Vadodara. The 26-year-old limped off without completing his quota of overs (1/34 in 6.5 overs). As a result, he missed the three-game T20 series against Bangladesh which India won 2-1. He also wasn’t considered for the upcoming two-Test series against The Tigers, starting on November 14 (Thursday) in Indore. The second Test will be a day-night affair, to be played at the iconic Eden Gardens, Kolkata from November 22.

Saini announced himself on the big stage with a Man-of-the-Match performance on his T20 international debut against the Windies. He claimed 3/17 from his four overs - his scalps were Kieron Pollard, Shimron Hetmyer and Nicholas Pooran, all three proven performers in T20 leagues around the world. He consistently clocked 145kph and ended his spell with a scarcely-believable wicket-maiden in the 20th over.

Saini finished the three-match series as the highest wicket-taker (5) from both sides.

“It (the series vs Windies) was possibly the best moment of my cricketing career. Virat (Kohli) bhai helped me a lot,” said Saini.

“The best part about playing under him is he allows you to express yourself. He keeps things simple and he just says that whatever field you want, I'll give you. He never puts you under pressure.”

In the T20 series against South Africa, Saini took just one wicket in two games but impressed the think-tank with his raw pace.

After a fine show in the T20s in the Caribbean, Saini was asked to stay back with the team for the two Tests as a cover for the pace bowlers. The Indian team management had expressed keenness on having him as a net bowler during the Tests with a view to groom him for future assignments.

Saini had previously been sent to the 2019 World Cup as a cover for Bhuvneshwar Kumar.

India’s pace bowling department will be strengthened if Saini is declared fit for the three T20s and as many ODIs against the Windies. Jasprit Bumrah is still recovering from the stress fracture in his lower back, while there’s no update on Bhuvneshwar Kumar's return. Kumar, who is struggling with a hamstring injury and a side strain, hasn’t featured in any international or domestic game since August.