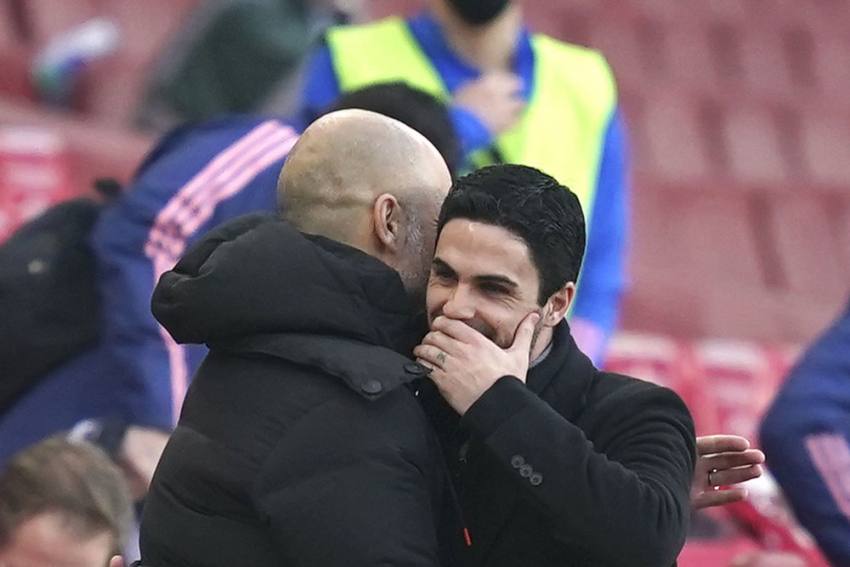 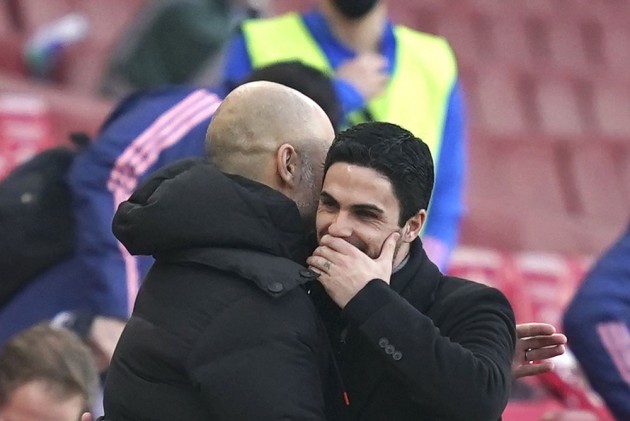 City's storming form continued as they sealed an 18th straight victory in all competitions – making it 13 wins from their last 13 games in the league – thanks to Raheem Sterling's early goal.

The visitors started in superb fashion at Emirates Stadium though failed to keep up the blistering pace. Arsenal, however, managed only one attempt on target despite some promising flashes.

Guardiola's team are 10 points clear at the top of the table, and 25 ahead of 10th-place Arsenal, who have lost their last eight league games against City, their joint-longest run of consecutive league defeats against an opponent, along with an eight-game run versus Leeds United between 1973 and 1976.

Arsenal have lost their last four Premier League games against City without scoring a goal – the first time in their history they have failed to find the net in four consecutive home league games against an opponent – but Guardiola nevertheless hailed the skills of Arteta.

"Mikel knows everything. He is so good. It is not because he is my friend or because today I beat him," Guardiola told Sky Sports.

"I know what he planned, know how he works. He is so clever. I learn a lot by watching his team. Today I learned something, I can use it in the future.

"It's not because we were together – he knows everything about football."

4 - Arsenal have lost their last four Premier League games against Manchester City without scoring a goal. This is the first time in their history they have failed to score in four consecutive home league games against an opponent. Barrier. pic.twitter.com/B8CGzVZhCI

For his part, Arteta was left frustrated by a tactical error from his team in the opening stages, which resulted in City having four attempts – including the goal – by the eighth minute.

"Absolutely [the start cost us]. We conceded the first goal, it's a really difficult situation, it puts the game exactly where they wanted," Arteta told Sky Sports.

"I think after that, the team reacted really well, we were on top of the game, tried to generate chances, momentum but we lacked the quality.

"We got something [tactical] wrong, we talked about something and then didn't do it in the first five or 10 minutes and they used the overloads down the side. It's a cross from [Riyad] Mahrez – you know where it is going – Sterling cannot head that ball in the middle of the goal.

"The moment we clicked, we did what we prepared, they found it difficult. We found really good spaces but when we were there, in the final third, we lacked the final pass."

City may have been unable to add to their lead – Joao Cancelo wasting an opportunity late on – but still remained relatively untroubled at the back as they earned a 15th clean sheet in the Premier League this season, the most by a team after 25 games of a top-flight campaign since 2008-09.

Their winning run stretches back to December 15, and a 1-1 home draw with struggling West Brom.

Since that game, City have faced just 78 shots in the league – 21 lower than any other team (Liverpool – 99), and only 23 of those have been on target, while they have made just two errors leading to an effort on their goal.

"It was hard like we expected it to be. It is difficult to play against Arsenal, Mikel is so difficult," Guardiola said.

"That's why I give incredible credit to this victory. It's Arsenal away. We need to win these types of games. People think that 13 wins in a row, 18 victories in a row looks easy.

"It is so difficult. Look across all of Europe. The consistency in this last month, honestly I didn't expect it. More than grateful for the players and what they are doing, but winning these games 1-0, that is when we need to realise that everything is so difficult."

Rumour Has It: Manchester United Close In On Deal For Gianluigi Donnarumma, City's Kevin De Bruyne Off Limits