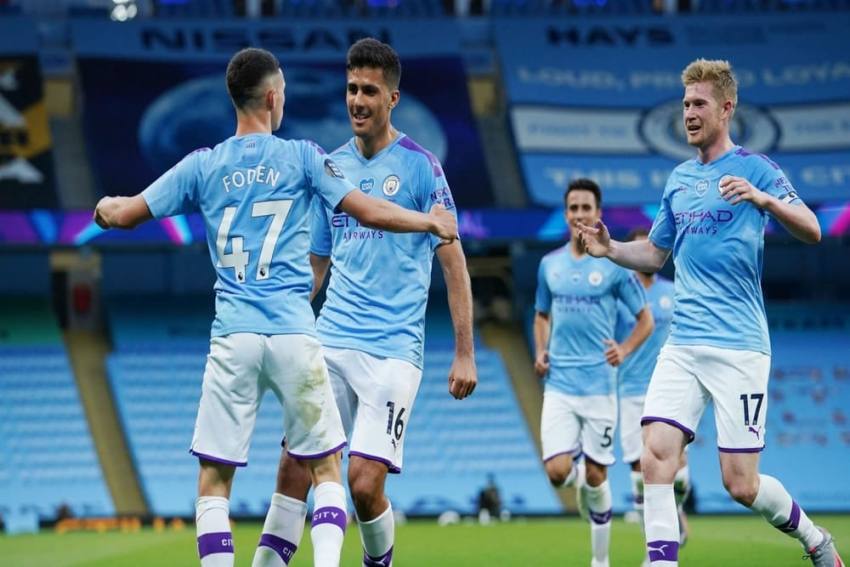 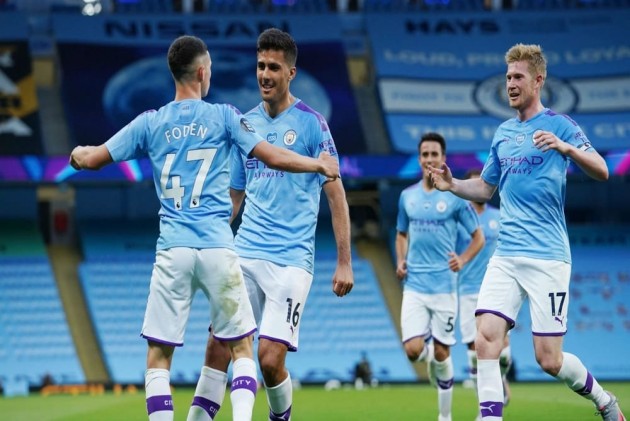 Liverpool's first game since being confirmed as Premier League champions did not go to plan as deposed title-holders Manchester City romped to a 4-0 win at the Etihad Stadium on Thursday.

The Reds' first top-flight title in 30 years was confirmed when City lost to Chelsea last week and the celebrations of their long-awaited success perhaps caught up with Jurgen Klopp's side, who were ruthlessly dismantled by the rampant hosts.

A Kevin De Bruyne penalty and clinical finishes from Raheem Sterling and Phil Foden put the game to bed before half-time, while an Alex Oxlade-Chamberlain own goal in the second half added to the ignominy.

Liverpool remain a whopping 20 points ahead of City, who are 11 clear of third-place Leicester City.

1 - Phil Foden has scored and assisted in the same game for the first time in the Premier League, while he is the youngest player to do so in a game against Liverpool in the competition (20y 35d). Platform. #MCILIV pic.twitter.com/kOFobA7spq

The visitors had started brightly, Mohamed Salah crashing a low effort against the post inside the opening 20 minutes.

City soon hit the front, though, De Bruyne stroking home a 25th-minute penalty after Sterling was hauled down by Joe Gomez following a sumptuous turn.

Sterling made it 2-0 when he collected Foden's pass inside the area and cleverly clipped past Alisson from eight yards.

Foden added a sublime third shortly before the break, firing over Alisson after the brilliant De Bruyne and Ilkay Gundogan had combined to carve open Liverpool's defence.

Substitute Oxlade-Chamberlain then turned into his own net in the 66th minute as he stretched to clear Sterling's effort on goal.

City substitute Riyad Mahrez had a stoppage-time goal ruled out by VAR after a handball by Foden in the build-up, but it mattered little as the damage had been well and truly inflicted on Klopp's men by then.

What does it mean? Wounded City humble new champions

Given the scoreline, you would be forgiven for thinking Klopp had decided to field a team of youngsters following their confirmation as Premier League champions. As it was, this was the Reds' strongest XI. They were no match for a City side clearly hurt by losing their title last week, though.

Pep Guardiola will have seen this as an opportunity to lay down a marker for next season and his side did not let him down. Roll on the 2020-21 campaign.

The England international had to wait until his ninth appearance against his former club to net against them and he certainly enjoyed the moment. He was superb throughout, linking up with De Bruyne and Foden to devastating effect.

Gomez and Sterling had a spat while on England duty last year and the Liverpool defender had a torrid time against his international colleague here.

The City man forced Gomez into a foul for De Bruyne's penalty and generally ran him ragged throughout.

- Liverpool's two heaviest Premier League defeats under Jurgen Klopp have both been at the Etihad Stadium against Manchester City.
- Manchester City have won their last four home Premier League matches by an aggregate score of 14-0.
- Liverpool have failed to score in five consecutive away games in all competitions for the first time since April 1992, when they went eight on the road without a goal.
- This was the joint-heaviest defeat by a side already crowned Premier League champions in a season, with Arsenal losing 4-0 away at Liverpool in 1997-98, which was also the game after they won the title.
- Raheem Sterling scored his first Premier League goal against former side Liverpool in his ninth appearance against the Reds in the competition.
- Phil Foden has been directly involved in 14 goals in his last 17 appearances in all competitions (6 goals, 8 assists), despite only starting 10 of those 17 games.

Guardiola's men travel to Southampton on Sunday, while the Reds host relegation-threatened Aston Villa at Anfield on the same day.