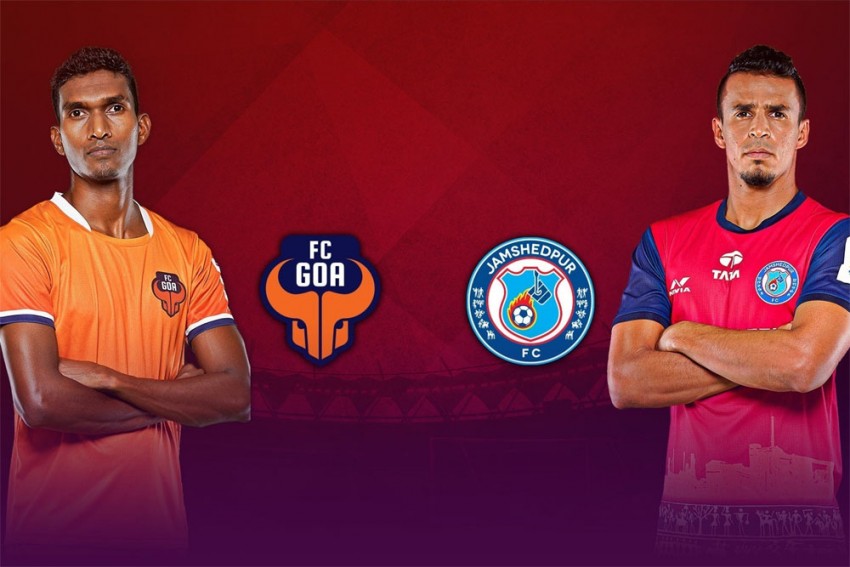 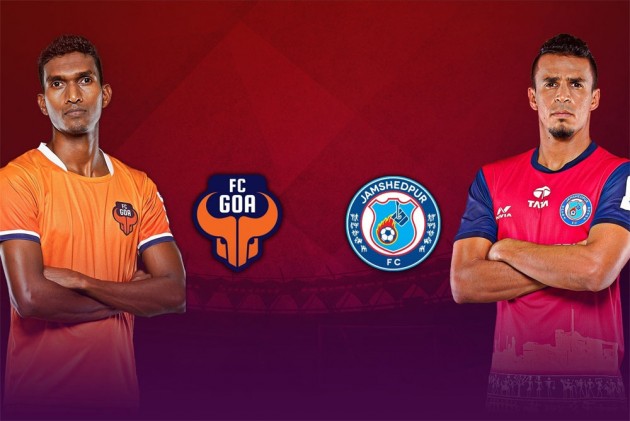 Jamshedpur FC proved their mettle by defeating pre-season favourites FC Goa with Sergio Castel scoring the lone goal in the 24th match of the Indian Super League 2019-20. What makes the win special is, this was their second away win in 12 attempts, and it came in just the perfect time, allowing themselves to jump into the second spot. FC Goa, as expected, started on a strong note. But Jamshedpur's tenacity proved the difference. The hosts lost Ahmed Jahouh after getting a second yellow card in the second half, thus compromising their chances. The match also witnessed ISL's best goalkeeper, Subrata Paul thwarting at least three clear chances, including a disputable goal-line save to break the Goan hearts. Goa thus suffered their first defeat of the season. That's all for tonight. Tomorrow, NorthEast host Mumbai City at Guwahati. Catch highlights of the match here.

90+7 - Goa continue to press for the equaliser. Meanwhile, hero of the match is Sergio Castel. Liston Colaco wins a very late corner. Last chance for Goa. And a misdirected header from the following ends the match. Upset of sorts.

90+5' - A long ball finds Mourtada Fall inside the Jamshedpur box, and his header lands on the lap of waiting Subrata Paul.

90+4' - Edu Bedia's forced to make clearance as Sergio Castel once again threatens to disturb Goa's sanity. An a sub for Goa. Very late one. Liston Colaco on for Edu.

90-2' - A corner for Goa, and a short one. Saviour Gama is not happy with the linesman. Brandon Fernandes and Manvir Singh work well to launch an attack. But shortlived.

90' - Sergio Castel and Mourtada Fall again, one on one. The Spaniard manages to keep the ball, then wins a throw-in. Killing crucial minutes. Jamshedpur still on the ball. Six minutes added on.

88' - Sergio Castel draws a foul from Mourtada Fall. Free-kick for Jamshedpur. But Goa win the ball back wasting time.

86' - A brief spell for Jamshedpur, then Robin Gurung is replaced by Joyner Lourenco.

85' - Robin Gurung gets some helping hand from Brandon Fernandes. Seems like a hamstring. Play resumes and Goa are on the ball again.

83' - Edu Bedia cons the referee just outside the Jamshedpur box, feigning pain, presumably from a slap while going for a header. But nothing's there. Free-kick.

80' - Then a dog appears from nowhere as the crowd increases the decibel. Substitute angers Jamshedpur head coach by going for the ball. Pity. Play stopped for a while to let the dog out.

78' - Free-kick for Goa. Subrata Paul on the ball and clatters on a Goa player.

76' - Brandon Fernandes cautioned for a challenge, from behind a Jamshedpur player. Now, visitors' turn to keep the ball.

75' - Despite one man down, Goa are keeping the ball to themselves. Jackichand Telem's back back-pass is cut out by Sergio Castel to end Goa's possession. Then, the visitors lose possession soon.

72' - As expected, a RED CARD. Second yellow for Moroccon Ahmed Jahouh. Lunges on Noe Acosta. Goa down one man, and one goal at home. Minutes ago, skipper Mandar Rao Dessai produces a skier for a cross.

70' - Jackichand Telem draws a foul, and free-kick for Goa. Noe Acosta, who fails to maintain the 11-yard distance, gets an earful from the referee and a booking. From the following play, Subrata Paul gets an easy hold.

68' - Mourtada Fall brings down Sergio Castel inside the box, and the Goa defender follows it up a kick after the tumble. That's another card and the referee is soft this time.

66' - And a total waste of effort from Aitor Monroy. Way over the bar. Change for Goa. Saviour Gama on for Lenny Rodrigues.

65' - Another foul from a Goa player. Ahmed Jahouh, already booked, brings down Noe Acosta. A stamp. Naughty play. Free-kick to Jamshedpur, just outside the box.

63' - Carlos Pena and Sergio Castel fight for the ball, and Jamshedpur man is on the ground. Free kick for the visitors. Meanwhile, a change for Jamshedpur. CK Vineeth off, Mobashir Rahman in.

60' - Robin Gurung and Manvir Singh on a tussle for the ball to save the blushes for Jamshedpur. From another attack for Goa, Jackichand goes for the goal. Misses the top corner.

57' - Goa are rolling the ball around. A long ball to Manvir SIngh, who heads back from inside the box, then Jitendra Singh wins the ball back for Jamshedpur. Anxious moment for Mohammad Nawaz as Serio Castel presses hard on. Spills the ball, but regains ground to get hold of the ball.

54' - Seriton Fernandes is run over by CK Vineeth near the near flag but the play continues. Tiri is booked for a foul on Edu Bedia. Jackichand on with another cross and Mourtada Fall's header is saved by Subrata Paul.

51' - Mandar Rao Dessai, burning some pace on the left flank, sends in a cross, gets blocked. Then, and another wave of attacks. Jackichand, from the right, sends in a dangerous ball, but some desperate defending.

49' - On the counter, Jamshedpur trouble Goa defenders with Sergio Castel on the move. But Seriton Fernandes does well to block a dangerous-looking cross, conceding a corner.

48' - Goa once again having a good spell of possession. And what a chance. Mourtada Fall finds Jackichand Telem with a long ball, then a cross as Jackichand keeps the move alive. But a good clearance.

8:28 PM IST: FC Goa started very well, but it's 0-1 in favour of Jamshedpur. The hosts created more chances, better ones. Then, a clinical finish from Sergio Castel made the difference between the two sides. Subrata Paul was brilliant under the bar for the visitors. At least three certain goals denied, to keep the lead.

40+3' - Yellow card for Seriton Fernandes, for a very late tackle from behind on Tiri.

45' - Robin Gurung wins the ball and from the following play, forces a save from Mohammad Nawaz. On the counter, Goa again denied by the brilliance of Subrata Paul. Another Edu Badia chance, this time from Brandon Fernandes' corner.

43' - What just happened! Brilliant positioning and save from Subrata Paul. It looked a certain goal. Ball on the line? A very good header from Edu Bedia, though, from Jackichand cross. VAR required.

42' - Mohammad Nawaz leaves his line and Jitendra Singh almost scores in first match. Corner for Jamshedpur. And good punch from Nawaz to clear the threat away. A throw-in from Narender Gahlot. Mourtada Fall gets to it first.

39' - Free-kick for Jamshedpur inside their own half. Sergio Castel beats Mourtada Fall after mixed up from Goa defenders. Noe Acosta finds himself unmarked, but his slips up. Easy take for Mohammad Nawaz.

37' - Brandon Fernandes and Manvir Singh on a good link-up play. Then wasted the chance with poor final execution.

35' - CK Vineeth found wanting. He's too slow to link up with Farukh Choudhary. Wasted chance for Jamshedpur. The visitors are in control now. And another brilliant pass from Sergio Castel. Almost finds an onrushing Farukh Choudhary. Mourtada Fall makes a timely interception.

31' - Goa on the move again. Jackichand Telem from the far sends in a cross, but too heavy, or Edu Bedia's slow?

30' - Mandar Rao Dessai is lively tonight. Narender Gahlot in a tussle with Seriton Fernandes, ends up losing the ball. Throw-in for Goa.

28' - Nasty tackle from Ahmed Jahouh to Noe Acosta. It screams for a booking. But only a free-kick. Then, a yellow card for Edu Bedia for simulated dive. Goal-kick for Goa.

25' - Jitender Singh tries to find Sergio Castel, but intercepted. From the counter, Goa make inroads inside the Jamshedpur half. But Narender Gahlot makes a timely interception. Then, a free-kick, despite Aitor Monroy getting the whole of the ball. Simulation at it's worst by Edu Bedia and referee is pathetic. And nothing from it. Fair outcome.

22' - Quick interchange. Mandar Rao Dessai on the ball, and releases one for Jackichand Telem. The Manipuri goes for the goal, and it sails over the bar.

21' - Goa, committing men forward, get another corner. Nothing comes off it. Throw in for Jamshedpur inside their own half. And start a move.

19' - Goa, looking for a quick response, gets moving. Jackichand at the top of the box, dribbles past two defenders and fires. But too timid an attempt.

17' - GOAL! Then, against the run of play, Jamshedpur take lead with Sergio Castel slotting home with his left foot. A long ball to Farukh Choudhary, and the Indian youngster sets up the league's leading scorer this season.

16' - Another brilliant move from Goa. Jackichand now playing in a more central role, gets the ball from Mandar Rao Dessai, then releases it for Manvir Singh, who shots it wide.

15' - Sergio Castel gets a tackle just outside the box, then a brilliant pass from Mourtada Fall to Jackichand and corner. From the clearance, Ahmed Jahouh goes for the goal with some venom. Sweet volley, just misses the target.

13' - Mission impossible for Manvir Singh. Too heavy a pass from Edu Bedia and goal-kick for Jamshedpur. Visitors then launch an attack and CK Vineeth almost hit the target. Misses the far post.

11' - Narender Gahlot manages to block Jackichand Telem near the far corner. Then Jamshedpur play it long. Mohammad Nawaz on the ball again.

8' - Jackichand Telem leaves his marker and goes for the goal. Subrata Paul denies him with a top save. That's brilliant move from the hosts. Then, Jitendra Singh is booked for a tackle on Edu Bedia. Very soft.

5' - Sergio Castel and Tiri in a brilliant link-up but Goa make their own move with skipper Mandar Rao Dessai at the heart of it. Then, a yellow card for Ahmed Jahouh for a dangerous lunge on Aitor Monroy.

2' - Jamshedpur continue to make impress with some incisive moves.

1' - Referee R Venkatesh blows the whistle.  And Goa goalie Mohammad Nawaz gets the feel of the ball after a Jamshedpur cross fails to find it's intended target.

7:23 PM IST: Players and match officials are out in the centre. National Anthem next.

Jamshedpur FC make four changes. Narender Gahlot and Jitendra Singh are making their ISL debuts while Vineeth gets his first game for the Men of Steel. Noe Acosta returns to the starting XI.

FC Goa are currently with eight points from four matches. A win tonight will take them to top of the standings. Currently, Sergio Lobera side's is third in the table. Meanwhile, Antonio Iriondo's team are fifth with seven points.

Lobera will be without Hugo Boumous and Seiminlen Doungel due to suspensions after a tussle in their fixture against NorthEast United earlier this month. Meanwhile, Jamshedpur will be without Piti, who picked up a knock in their last outing.

Ahead of the fixture, Lobera praised the opposition. He revealed that their backline is their biggest strength. "I think Jamshedpur is a very strong team with very good defenders and attackers. They have a very good balance between attack and defence and it's going to be a very difficult match for us," said Lobera.

Meanwhile, Iriondo feels that his team needs to adapt to his tactical soon, otherwise, it could be a little too late for them.

"I will like the players to adjust a bit quicker to what I want from them. But we have to understand that it is a little bit tough to do what we are asking. Difficult things and good things take time. So, we are going to try to keep improving and try to be better, and get the team we want to have," he said.