Rohit Sharma's maiden double-century powered India (IND) to 497/9d against South Africa (SA) on Day 2 of the third and final Test in Ranchi. In response, the visitors were 9/2 when bad light forced early stumps. Mohammed Shami and Umesh Yadav took a wicket each. Get here highlights of IND vs SA, 3rd Test, Day 2 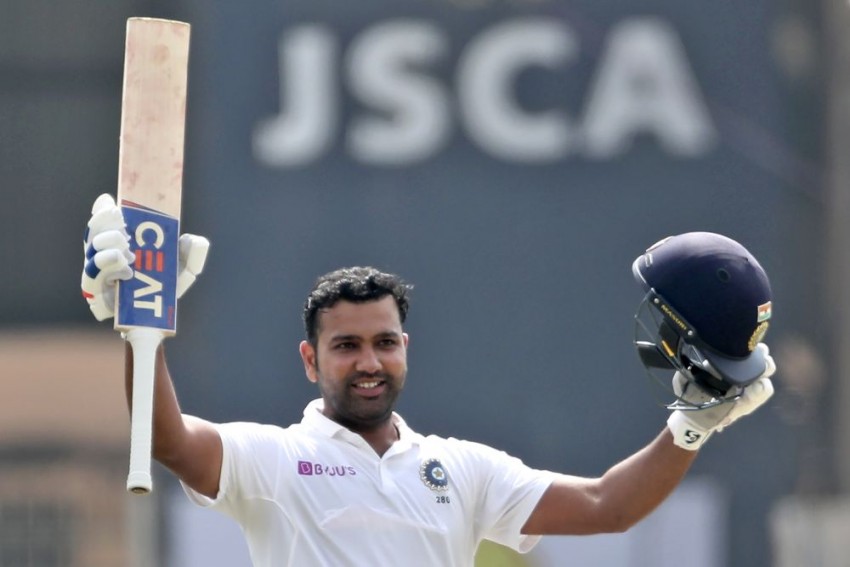 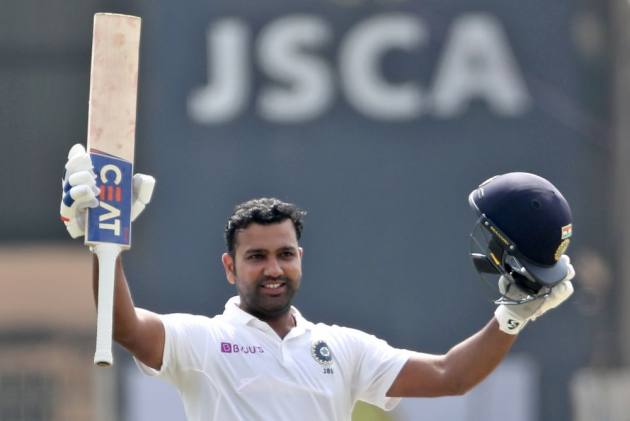 Bad light brought an early end to the second day's play in the third and final Test between India and South Africa in Ranchi on Sunday (October 20). India declared their first innings at 497/9 after Rohit Sharma (212) struck his maiden double-century in Tests, and Ajinkya Rahane (115) got to the three-figure mark for the first time at home since 2016. In reply, the visitors were 9/2 with both their openers Quinton de Kock (4) and Dean Elgar (0) dismissed. Mohammed Shami and Umesh Yadav scalped one each. Follow highlights of IND vs SA here (SCORECARD | CRICKET NEWS)

15:49 hrs IST: That'll be stumps. The umpires have taken the bails off, and the covers are coming on. This was inevitable.

Defending champions Andamlak Belihu and Tsehay Gemechu produced their personal best to retain the men's and women's titles respectively at the 15th Airtel Delhi Half Marathon at Delhi on Sunday. Belihu's timing of 59:10 was better than the 59.18 that he had clocked to win the title last year but it was four seconds short of the course record set by Guye Adola (59.06) in 2014. READ HERE

15:23 hrs IST: And the players are walking off! Bad light has stopped play. It happened at the same time on Saturday as well. South Africa are still 488 runs behind. We'll keep you posted!

15:13 hrs IST: OUT! Banged in short from Umesh, down leg, and De Kock (4) couldn't get his top glove out of the way. Another simple chance for Saha. Two wickets in two overs for India. Faf du Plessis comes to the crease. South Africa are 8/2

15:07 hrs IST: OUT! Back of a length and Shami finds extra bounce outside off, Elgar (0) thinks of leaving it but gloves it faintly off the left thumb and Saha takes an easy catch. Another failure for the left-handed batsman. Zubayr Hamza comes to the crease. South Africa 4/1. Umesh Yadav comes into the attack.

15:01 hrs IST: Hello again, everyone! Dean Elgar and Quinton de Kock are at the crease. Mohammed Shami to open the attack.

14:42 hrs IST: India (497/9) have declared. South Africa called for a helmet to place a fielder at short leg but Kohli decided to call Shami and Nadeem back. It will also be tea. Jadeja reached yet another half-century, while Umesh provided the entertainment. For the visitors, Linde finished with a four-wicket haul. We'll be back in 20 minutes.

14:31 hrs IST: OUT! Umesh falls after a cameo. 31 off just 10 balls with five maximums. Goes for the slog sweep but gets a top-edge, Klaasen runs back and takes a fine catch. Mohammed Shami comes to the crease. India 482/9

14:26 hrs IST: OUT! Quick glove work from Klaasen. Ashwin plays for the turn, there is none, beats the edge and Klaasen does the rest. The India No. 8's back foot was on the line. Shahbaz Nadeem comes to the crease. India 464/8

14:20 hrs IST: Spinning down leg with some bounce, Jadeja goes for the sweep and hits it fine. Fifty for the Indian. And it's time for the sword celebration in Ranchi. Jadeja gives chase and saves a couple. Loses his wicket the very next ball. Slower through the air from Linde, full and spins away outside off. Jadeja goes for a drive but edges it behind to Klaasen. Third wicket for the South African. Umesh Yadav comes to the crease. India 462/7

13:47 hrs IST: OUT! Arm-ball from Linde which drifts in with the angle, Saha leans forward and plays for the turn, but is beaten on the inside edge. The ball hits top of off and middle. India 417/6. Jadeja 32*. R Ashwin comes to the crease. Second drinks break of the session. It is an extended session (till 14:40 local).

12:33 hrs IST: OUT! 250th first-class wicket for Rabada. End of what has been an incredible knock from Rohit (212). Gets caught at the fine leg boundary.  Don't think Rohit timed that pull well. All Protea go up to congratulate him as he makes the walk back to the dressing room. Super knock! Wriddhiman Saha comes to the crease. India 371/5. Jadeja 15*

12:25 hrs IST: SIX! Short ball from Ngidi, and Rohit launches the pull to deep square leg for a maximum. Maiden Test double ton for the Indian! Got his 100 with a six, now gets the double with a six too! The crowd erupts, the dressing room is up to applaud. A perfect tribute to the birthday boy Virender Sehwag. This might be the beginning of something exceptional. India 370/4. Jadeja 15*

12:18 hrs IST: Rohit will have to wait. A maiden over! Massive buzz around the ground as they wait in anticipation. India 357/4

12:12 hrs IST: Welcome back! Rohit will resume on 199. He will be on strike as well for the start of the post-lunch session. Ngidi to start proceedings

Meanwhile, THIS legendary player has been drafted in by Australian coach Justin Langer to help mentor the side during their upcoming Twenty20 series against Sri Lanka and Pakistan. He is the latest to be brought into the fold after Ricky Ponting joined the backroom staff at the one-day World Cup this year and Steve Waugh helped out during the Ashes series in England.

11:33 hrs IST: That's lunch. India 357/4. Rohit 199*, Jadeja 15*. Twenty-two boundaries in this session. South Africa got a breakthrough when Linde found some extra bounce to have Rahane nicking off for 115. That's all they managed. We'll be back in about 40 minutes. Stay tuned!

11:28 hrs IST: FOUR! Short and wide from Nortje, and Rohit cuts through backward point. Typical Rohit. Takes a single off the next ball to move to 196. Costly over from the South African pacer, 11 off it. India 350/4. Jadeja 11*

South Africa have taken the second new ball. Rabada comes back into the attack

10:55 hrs IST: OUT! Maiden Test wicket for Linde. Extra bounce and sharp turn for Linde. Length ball, Rahane stays back in the crease and looks to work this towards third man but gets an edge, and Klaasen, who is also playing his first Test, makes no mistake. Some respite for South Africa. Ravindra Jadeja comes to the crease. India 306/4. Rohit 167*

10:47 hrs IST: FOUR! Fuller ball from Piedt, around off, Rahane charges down the track and hits this inside-out over cover. Shot! Both batsmen are literally toying with the Proteas. Expensive over from the offspinner, 14 off it. SESSION RUN RATE - 4.82. India 306/3. Rohit 167*, Rahane 115*

10:20 hrs IST: Length ball from Nortje, and Rahane works it to wide of cover point to bring up his first Test century at home since 2016 and 11th overall. What a knock! Fans and the dressing room stand up to applaud. Fluent innings! Can't get any better! Seventh individual century in the series for India, who are 273/3. Rohit 149*. Linde comes back into the attack.

10:15 hrs IST: FOUR! Width outside off, Rohit (144) uses the pace to help this past the third slip fielder. There's no third man, and it races away to the boundary. Can't bowl there to a well-set batsman. Costly over from Ngidi, 14 off it. Rahane takes a single off the last ball to move to 99. India are 267/3.

09:56 hrs IST: FOUR! Short of length ball from the South African, and Rohit hits this uppishly off his hip to beat the fielder (Rabada) at long leg. The double-century of the partnership comes up! India (241/3) are doing well by scoring quickly. If it rains post-lunch, the hosts would want to be anywhere around 400. Rohit 126*, Rahane 91*

09:50 hrs IST: FOUR! Good length ball from Rabada, Rahane gets forward to the pitch of it and caresses this between cover and mid-off. Excellent! Enters 90s. Five off the over. India 237/3. Rohit 122*. Ngidi comes back into the attack

Real Madrid suffered their first La Liga defeat of the season as Lago Junior's early strike earned Real Mallorca a shock 1-0 victory at Son Moix. With Barcelona having leapfrogged Zinedine Zidane's side to lead the way in LaLiga earlier on Saturday, Madrid needed a victory to move back to the top of the pile. But Mallorca had other ideas and Lago stunned Madrid seven minutes by sending what was the home side's only shot on target in the entire match into the bottom-right corner. READ HERE

09:30 hrs IST: All set for play. Rabada, Ngidi and Nortje's challenge will be to make the old ball talk. Rohit and Rahane are at the crease.

09:15 hrs IST: WEATHER UPDATE - It's brighter than it was Saturday afternoon, and play will start at 9.30 local. But showers are predicted late in the post-lunch session.

Kagiso Rabada - "We haven't really struck with the new ball so it was about time that happened. We were a bit unlucky too, but we thought it was best to capitalize on it. They were 3 down after 17 so that was a big plus though 3 down after 10 overs would've been nice. There's always areas to improve. We all know seam position is important, so that's always something you can work on, and that's definitely on my mind. The ball does get soft in India, you're never in the game for the whole day as a seamer. We didn't get the ball to reverse, that plays a crucial role here, and the plan is just to control what we can. There's always bound to be a partnership in India and we are looking to break it. Even in our team, there was a 10th wicket partnership of a hundred, so that's what happens in India if you apply yourself as a batsman."

6 - Centuries scored by Rohit Sharma in Tests - all of them coming in India. Among batsman who haven't scored a century in away Tests, only Bangladesh's Mominul Haque (eight) has gone past the three-figure mark (at home) more number of times than Rohit.

DID YOU KNOW? 17 - Sixes hit by Rohit in the series so far, 13 in the first Test in Vizag and four so far in the Ranchi Test. It's the most by a player in a series, surpassing 15 by Shimron Hetmyer against Bangladesh in 2018/19.

08:38 hrs IST: Hello and welcome to Outlook's live coverage of Day 2 of the third and final Test between India and South Africa.