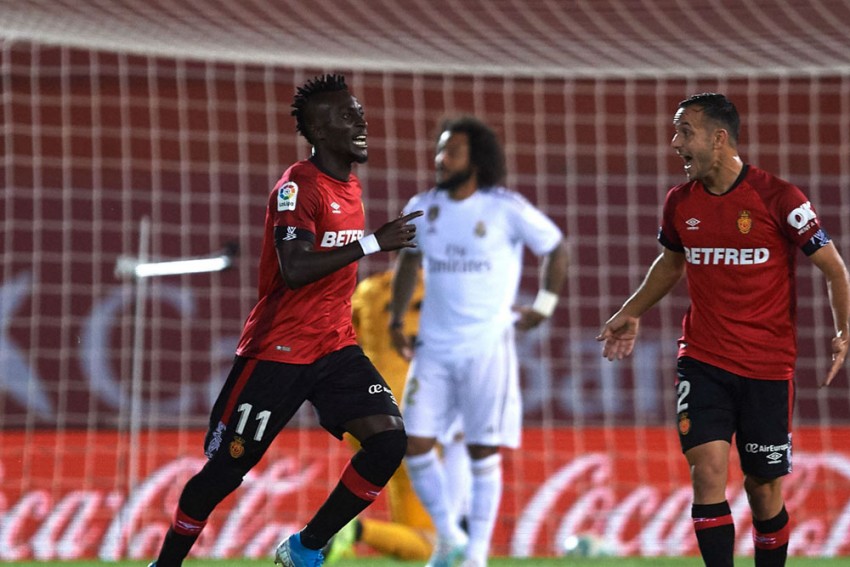 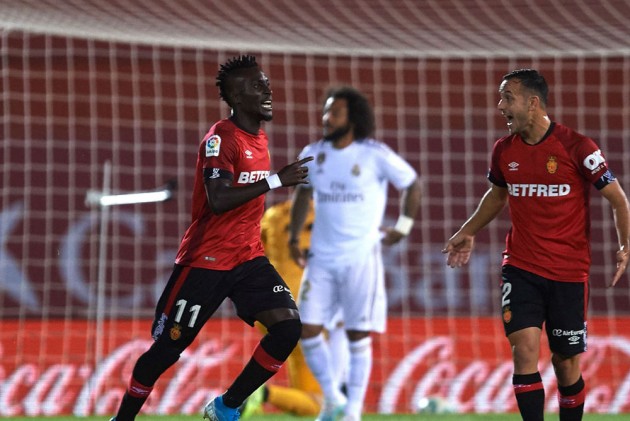 With Barcelona having leapfrogged Zinedine Zidane's side to lead the way in LaLiga earlier on Saturday, Madrid needed a victory to move back to the top of the pile.

But Mallorca had other ideas and Lago stunned Madrid seven minutes by sending what was the home side's only shot on target in the entire match into the bottom-right corner.

Karim Benzema hit the crossbar before substitute Rodrygo Goes squandered a presentable chance and Madrid's hopes of a comeback were all but over when Alvaro Odriozola saw red in the 74th minute, with Mallorca holding firm to claim their first win over Los Blancos since 2009.

Madrid looked to have quickly settled into their rhythm but were behind when Lago skipped inside Odriozola and curled a superb finish beyond Thibaut Courtois.

9 - Thibaut Courtois has conceded from nine of the last 14 shots on target he has faced for Real Madrid in all competitions. Vulnerable. pic.twitter.com/hxyCOQJUNx

Ante Budimir thought he doubled Mallorca's tally seven minutes later when he was set up by Lago, only for his fine strike to be disallowed for offside.

Benzema was inches away from restoring parity before the half-hour mark - his close-range half-volley bouncing back off the woodwork.

Vinicius Junior burst through Mallorca's ranks early in the second half and teed up Benzema, but the Frenchman sent his strike at Manolo Reina.

Rodrygo replaced Isco in the 66th minute and should have done better when he was fed by Benzema, his touch getting away from him and the opening evaporated.

But as the Madrid pressure was building, Odriozola received a second yellow card for a reckless lunge on Iddrisu Baba to round off a frustrating night for the visitors.

What does it mean? Barca back on top

Reigning LaLiga champions Barca cruised to a 3-0 victory over Eibar to put the pressure back onto Madrid.

Los Blancos failed to respond and now sit second, a point above this season's surprise package Granada and one behind Barca. The rivals were scheduled to meet in El Clasico next Saturday, but perhaps the postponement due to political tensions in Catalonia has worked in Madrid's favour.

Mallorca's winger scored 11 goals in the Segunda Division last term but had not replicated that form this season prior to Saturday's encounter.

But he came good against the biggest opponents of all as, boosted by his goal, he was a constant tormentor of Madrid's defence.

Jovic fails to take his chance

Luka Jovic has often been given short shrift by Zidane this term but, handed the opportunity to impress from the start, he struggled to make an impact, even when Mallorca's defending became more hap-hazard after the interval.

0 - Against Mallorca, Luka Jovic failed to register a single shot and a single touch in the oppositte box. Disconnection. pic.twitter.com/tEjYLLTPz4

- This was Vicente Moreno's 100th match in charge of Mallorca. He was won 47 per cent of his games.

- Courtois has conceded from nine of the last 14 shots on target he has faced for Madrid in all competitions.

- Lago is the first Ivorian player to score against Madrid in LaLiga since Arouna Kone for Levante in February 2012.

- Jovic failed to attempt one shot on goal or have a single touch in the opposition box.

Madrid will aim to bounce back against Galatasaray in the Champions League on Tuesday, while Mallorca's next outing is against lowly Leganes in LaLiga.