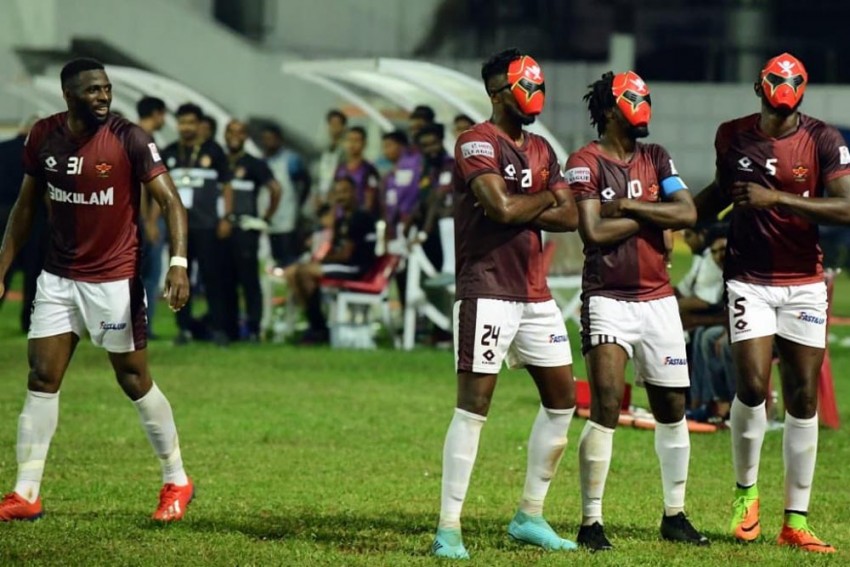 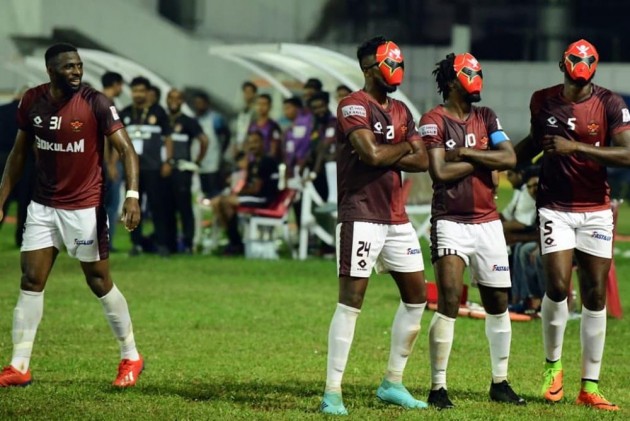 Henry Kisekka scored the solitary goal of the match, as Gokulam Kerala edged past Indian Arrows in their 2019-20 I-League encounter against Indian Arrows. The match took place at Goa's Tilak Maidan, home to the All India Football Federation's developmental side. It was a well-balanced clash, with both sides trying to get past the other, with only a single goal making the difference. Catch the highlights of the 2019-20 I-League football match between Indian Arrows (ARW) Vs Gokulam Kerala (GKFC) here

18:55 hrs IST: FT' Its fulltime as Indian Arrows fall to a narrow defeat against Gokulam Kerala, who win two in a trot, after beating NEROCA FC in their 2019-20 I-League opener. Meanwhile, this was Venkatesh's first 2019-20 I-League match, but he will have a lot of positives, with the young AIFF developmental side putting in a good display.

A poor shot by the Gokulam Kerala hitman, as he skies it way too high!

18:48 hrs IST: 89:00' Indian Arrows are not being able to build any final surge at goal, with Gokulam Kerala slowing down the tempo and keeping the possession.

18:37 hrs IST: 78:05' Poor freekick by Gurkirat. He should have done better. He tries to curl it in, but it goes way too high above the Gokulam Kerala goal. 10-man Gokulam need to hold on for a few more minutes!

18:35 hrs IST: 76:50' RED CARD TO ETTIENNE FOR A GOAL-SAVING FOUL ON AMAN CHETRI OUTSIDE THE GOKULAM KERALA BOX!

Excellent wing play by Gokulam Kerala, as the cross finds Joseph in the Indian Arrows box. He heads it towards goal, but Samik puts in an instinctive save and palms it away for a corner.

18:27 hrs IST: 68:11' Also, Venkatesh has done a substitution for Indian Arrows, Gurkirat comes in for Laldinliana.

18:26 hrs IST: 66'14' Gokulam Kerala are slowing down the proceedings now, in contrast to Indian Arrows' fast-paced style of play. In the past, whenever teams have tried to match the AIFF's team's tempo, they have been taught a lesson, so Fernando Valera is implementing the right tactics probably.

18:17 hrs IST: 58'15' Indian Arrows are keeping the pressure on and haven't given up yet. They are playing aggressively and are not giving Gokulam Kerala much space to create any attacking chances.

An excellent long ball to Kisekka, as he beats the offside trap and sends a rocket of a shot past the goalkeeper!

18:07 hrs IST: And its the second half, as Gokulam Kerala still search for the goal against a sturdy Indian Arrows side.

17:48 hrs IST: HT' And its halftime, with both sides still searching for a goal. Gokulam Kerala started off aggressively with Kisekka and Joseph combining well. But Indian Arrows soon worked themselves into the game, and began to edge past their opponents due to their cohesiveness. Can the Arrows hold on till the end or even find a winner?

17:43 hrs IST: 41:50' Five more minutes for halftime with a minute or two of added time. Its 0-0, with both sides still looking for a clinical move. Indian Arrows have been excellent, troubling Gokulam Kerala with their positioning and movement with and without the ball.

Good build-up play by Gokulam Kerala, with the ball being laid out for Garcia. But Givson tracks the number 8 and steals the ball with much aplomb.

17:34 hrs IST: 33:09' Indian Arrows are playing some good football. Gokulam Kerala are not being able to consolidate control, with the opposition exploiting the spaces in midfield. Kisekka and Joseph have been too central, allowing the younger AIFF players to find gaps around the field of play.

That was close! Excellent save by Samik. Gokulam Kerala dislodged Indian Arrows away from possession, and Kisekka put in a ball for Joseph, who should have done better, but hit it straight at the opposition goalkeeper.

That was close as Arrows find it hard to deal with a Gokulam Kerala corner. Amiri pounces on a mishandled clearance on the edge of the box, and his shot gets blocked near the goalline and gets cleared away in a haphazard manner.

Oh! That was close and lazy from Kisekka, as he toe-poked a shot past the Arrows goal. It was pretty close, and he should have done better. Indian Arrows need to be cautious!

17:06 hrs IST: 04:30' Good freekick by Givson, as it curls in straight towards Ubaid. That wasn't threatening, but Gokulam should realize that they can't give away freekicks to Indian Arrows.

Excellent shot by the Gokulam Kerala captain, as the young Indian Arrows goalkeeper keeps it out. Corner to Gokulam!

17:01 hrs IST: And we kick-off at the Tilak Maidan, as Gokulam Kerala look to continue their fine form away from home against Indian Arrows. Can the young AIFF developmental side start their new season with a win?

16:56 hrs IST: Both teams have lined up for the pre-match formalities.

16:54 hrs IST: Former India assistant coach, Shanmugam Venkatesh, who is the new Indian Arrows head coach has revealed that the first match is always special. Here is what he had to say:

16:53 hrs IST: The Gokulam Kerala team is on the field right now, warming up ahead of their crucial I-League clash Vs Indian Arrows. Here are some snapshots:

16:40 hrs IST: Hello everyone and welcome to Outlook's live coverage of the 2019-20 I-League match between Indian Arrows and Gokulam Kerala FC. Fernando Valera's side are in hot form, and face a youthful AIFF developmental side, who will be playing in their season opener.

Indian Arrows will have to be cautious about Gokulam Kerala this season, unlike last season, where the young side defeated them. With new head coach Shanmugam Venkatesh at the helm, the team has plenty of young talent like Vikram Pratap Singh and Ajin Tom. Last season, the Arrows put in solid performances in the second half but will need to put in top drawer displays from the start this time.

During the pre-match press conference, former India assistant coach Venkatesh revealed that stamina and technical ability are his side's strengths. "They are not at the same age level as the senior professionals and physically, it will be a difficult match for them. However, we have our own strengths. Stamina and technical ability-wise we are good and we will keep working on them," he said.

"We are a new team and are here to produce the future of Indian football. I would like to thank the AIFF for the opportunity. It's a big challenge and I am very excited and confident and looking forward to working with this set of boys," he quipped.

Gokulam Kerala are in top form this season after an excellent preseason, where they lifted the Durand Cup trophy, edging past Mohun Bagan in the final. The team will be relying heavily on the forward partnership of captain Marcus Joseph and Henry Kisseka.

During the pre-match press conference, head coach Fernando Valera revealed that his side was wary of their upcoming opponents, although Gokulam have already registered a win. "Our triumph at home gives us confidence but we must be respectful to the rivals and we know that Indian Arrows is a very intense team," he said.