One brilliant team effort from India to win the T20I series with one match to go. Hardik Pandya, under pressure, finished off in style after openers Shikhar Dhawan and KL Rahul laid a solid foundation. Skipper Virat Kohli played a controlled knock, setting up for a late charge. And Pandya did just that. Earlier, T Natarajan, in his only the third international match, led India's bowling attack. Catch the highlights of the AUS vs IND, 2nd T20I match at the iconic Sydney Cricket Ground here:

5:24 PM IST: And just after hitting that massive six, Hardik Pandya said "more than the six", he 'wanted to finish the game" for India. He remained unbeaten on 42 off 22 balls with the help of three fours and two sixes. Those two maximums came in the last over.

And check some fascinating photos from the match HERE.

India have now won nine consecutive T20I matches to join Pakistan in the third spot. Both first and second are in Afghanistan's name (12 and 11).

5:20 PM IST: India beat Australia by six wickets in the second T20 International in Sydney to take an unassailable 2-0 lead in the three-match series.

Put in to bat, Australia scored a challenging 194 for 5 with skipper Matthew Wade top-scoring with a quick-fire 32-ball 58 while Steve Smith contributed 46 off 38 balls. Then, India chased down the target in 19.4 overs with Hardik Pandya remaining not out on 42 off just 22 balls. Shikhar Dhawan contributed 52 while captain Virat Kohli made 40.

India had won the first T20I by 11 runs in Canberra on Friday. The inconsequential third T20I will be played at the same venue on Tuesday.

5:17 PM IST: Debutant Daniel Sams on with the last over in a must-win game. A double off the first, then Hardik Pandya hit the second for a six. 6 needed off 4. A bouncer for a dot. Then, a six to seal the series.

5:04 PM IST: Massive wicket! Daniel Sams had Virat Kohli caught behind. India captain made 40 off 24. Brilliant leaping take by Matthew Wade. Shreyas Iyer joined Hardik Pandya in the middle. Pandya got a four off the last ball. Nine from the over. IND - 158/4 (17). India need another 37 more from 18 balls. 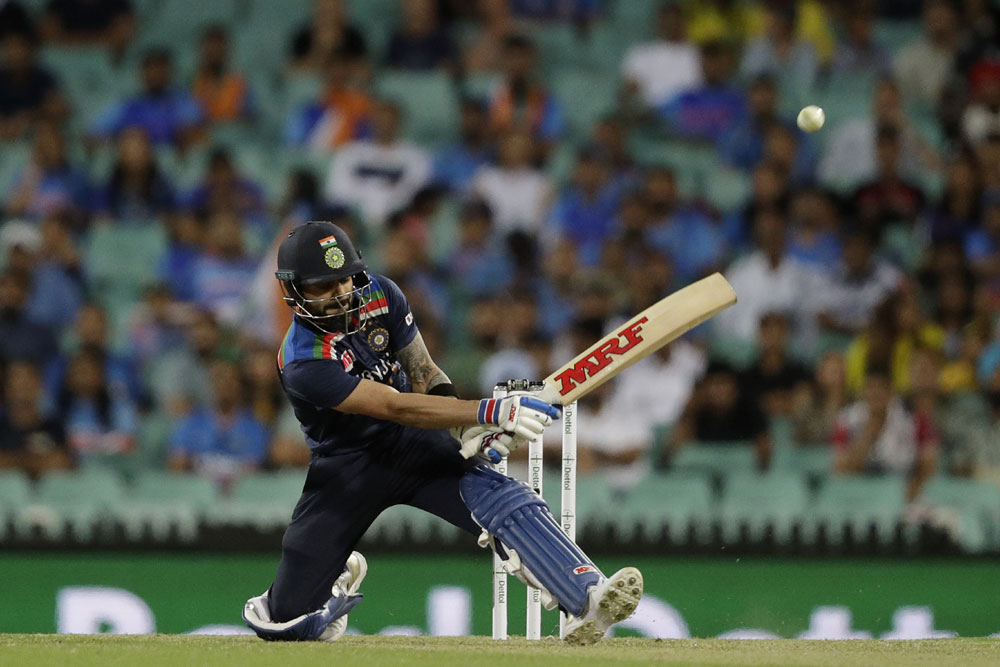 How about that! Kohli-ABD. Photo - AP Photo/Rick Rycroft

4:55 PM IST: Andrew Tye returned for his third over. A single to Hardik Pandya, then Virat Kohli hit the next one for a four. A dot, then Kohli slop swept the fourth for a six. Sensational. A rarity from the skipper. A wide, a four through the cordon. No fielder at third man, and a four. 18 runs from the over. IND - 141/3 (15). India need another 54 from 30.

4:40 PM IST: WICKET! Adam Zampa on with his second over. Shikhar Dhawan failed to time his shot, and ended up offering a catch to Swepson at deep mid-wicket. Dhawan made 52 off 36. Sanju Samson joined skipper Virat Kohli in the centre. Kohli hit the fifth ball for a six. 11 runs from the over. IND - 105/2 (12). India need 90 more from 46.

4:22 PM IST: Double bowling change. Moises Henriques, right-arm pacer, on. Two singles, then Shikhar Dhawan timed his cut shot to perfection and found the gap. A four behind square. Nine runs from the over. IND - 73/1 (8).

4:03 PM IST: Bowling change. Four overs and four bowlers for Australia. Glenn Maxwell, off spinner, on. KL Rahul welcomed him with a four, to fine leg. Followed by a three, to the same area. Shikhar Dhawan launched the third for a six, over deep mid-wicket. The left-hander found the gap for a four to backward point. Two singles more. 19 from the over. IND - 43/0 (4).

3:59 PM IST: Bowling change. Andrew Tye, right-arm pacer, on and straight away a review for LBW against KL Rahul. Pitching outside and a little high. Australia lost the review. Another review, almost. Similar delivery and play, but a lot closer. Australia not wasting another. A double off the third, then a free hit. Rahul deposited the free-hit ball to deep cover for a six. A single, and Shikhar Dhawan took his chance. Thick edge and four to third man. 15 runs from the over. IND - 24/0 (3).

3:46 PM IST: Debutant Daniel Sams, left-arm pacer, opened the proceedings. Two dots to KL Rahul. A dot, then a dot as Shikhar Dhawan denied a 'quick' single. A double to third man. Slowish outfield. That cut should have gone for a four. A single to end and five from the over.

3:40 PM IST: Players are back. Shikhar Dhawan and KL Rahul to open for India.

The ECB did not release any names and didn't say if the two members were players or officials. It said the two positive tests came after an additional round of testing on players and officials sparked by the news that two staff members at the Cape Town hotel used by both teams for the series had tested positive for COVID-19. The players and management are now self-isolating in their rooms, reports claimed.

Well, a big target for India. Brilliant from Thangarasu Natarajan but Aussies milked other Indian bowlers, with stand-in skipper Matthew Wade hitting 58 off 32. Steve Smith hit 46 off 38, then Glenn Maxwell (22 off 13) and Moises Henriques (26 off 18) contributed with valuable scores to give the Aussies a good total. India will rue the missed chances.

3:21 PM IST: Expensive Deepak Chahar with the last over of the innings. Marcus Stoinis took a double, then a dot. Three off the third as Hardik Pandya almost conceded a boundary at backward point. Another three at long-off. And a six over backward point. A skier and a dropped catch, with the ball falling between two fielders. Big over to finish. 17 from it. AUS 194/5.

3:13 PM IST: WICKET! T Natarajan on with his last over. Singles off the first two. KL Rahul and belatedly the bowler claimed for a caught behind against Moises Henriques. Umpire Paul Wilson, after the initial disagreement, raised his fingers. Reviewed, and huge roar. Meaning, the decision stood. Henriques out for 26 off 18. AUS - 171/5 (18.3).

3:09 PM IST: WICKET! Yuzvendra Chahal on with his final over. Steve Smith hit the fourth ball for a six, once again, straight. Then the Indian spinner got his man the very next ball. Juggling take by Hardik Pandya at deep. Smith made 46 off 38. Marcus Stoinis joined Moises Henriques. 10 runs from the over. AUS - 169/4 (18).

3:00 PM IST: Last five overs and Steve Smith took over. Yuzvendra Chahal on with his third over. A single, then Smith launched the second over for a six, straight. Virat Kohli is fuming. Not happy with Chahal's line. Two singles, then three byes and the ball slipped under KL Rahul's gloves. And on top of that, wide called. Four from the extra delivery. Moises Henriques hit the next delivery for a six. Right from the middle of the ba, over backward square leg. Big over. 20 runs. AUS - 152/3 (16).

46 runs and one wicket in the last five overs.

2:45 PM IST: WICKET! India needed wickets, and Shardul Thakur gave one. Steve Smith hit the first two balls for fours, then a single. Glenn Maxwell lofted the fourth, but ended up offering a catch to Washington Sundar at point. He made 22 off 13. Slower ball, and it worked. AUS -121/3 (12.5).

2:34 PM IST: Glenn Maxwell joined Steve Smith in the centre. Bowling change. Yuzvendra Chahal on with his leg-spin. And Maxwell hit the second ball for a six, over long-off. Busy over. Ten runs from the over. AUS-91/2 (10).

44 runs and a wicket in the last five overs.

2:14 PM IST: Shardul Thakur returned for his second over. Matthew Wade welcomed him back with a four, to long-on. Then Hardik Pandya dropped the Aussie skipper at deep, and the ball rolled over for another four. A dot, then another four. 12 from the over. AUS-59/1 (6).

Steve Smith is the new man.

Brilliant first over from Natarajan. One wicket, one run.

2:04 PM IST: Washington Sundar continued, and India continued to leak runs. Matthew Wade hit back-to-back fours off the first and second, then D'Arcy Short got one off the last ball 15 from the over. AUS - 46/0 (4).

1:59 PM IST: Bowling change. Shardul Thakur, right-arm pacer, with the third over. Matthew Wade hit the first ball for a four, a pull shot with some conviction. Eight runs from the over. First innings total at SCG is 165, and the Aussies, at the moment, look all set to score more. AUS -31/0 (3).

1:49 PM IST: Early onslaught from the new Aussie captain. He hit Deepak Chahar for three fours. 13 from the over.

1:43 PM IST: Deepak Chahar, right-arm pacer, with the first over for India.

1:42 PM IST: Weather once again nice and comforting. Players are out. Two left-handers Matthew Wade and D Arcy Short to open for the Aussies.

1:31 PM IST: And another sad development. 1st ODI between South Africa and England has been abandoned.

1:22 PM IST: Matthew Wade: "Well someone had to step in. Happy to be captaining Australia. Finch, Hazlewood, Starc are out. Sams, Stoinis and Tye are in."

1:20 PM IST: Virat Kohli at the toss: "We will bowl first. Pitch looked really nice in the second half in the previous games we played. They are missing Aaron Finch today, so we want to restrict them and chase it down. Chahal replaces Jadeja. Thakur replaces Shami. Iyer in for Pandey."

1:14 PM IST: Toss time! Virat Kohli won the toss and opted to bowl first. And there was no Aaron Finch in the centre.

Matthew Wade is leading Australia today. Lots of changes for both sides. And Harsha Bhogle, in the studio, said something about brooms, sweeping the teams...

He was with the Delhi Capitals set-up in the Indian Premier League.

"The England and Wales Cricket Board (ECB) and Cricket South Africa (CSA) have agreed to delay the start time for today’s One-Day International match, which is due to take place in Paarl. The England players and management underwent an additional round of PCR tests on Saturday evening, after two members of the hotel staff testing positive for COVID-19. Whilst the ECB awaits ratification of those test results the decision has been taken to delay the start of today’s ODI match," ECB press release.

The ECB and Cricket South Africa have agreed to delay the start time for today’s ODI in Paarl.

12:58 PM IST: And more trouble in South Africa. The rescheduled first ODI against England has reportedly been delayed after members of the hotel staff tested positive for COVID-19.

12:43 PM IST: First glimpse of players warming up before the toss. Here's a look at possible XIs:

Finch was struggling but likely to lead the team in the must-win game.

12:33 PM IST: And the first break of the day was, Mitchell Starc's unavailability. Read details HERE.

12:31 PM IST: After a wobbling start, India-A have done well to close the day at 237/8 with skipper Ajinkya Rahane unbeaten on 108 off 228 balls. Both the openers Prithvi Shaw and Shubman Gill got out for ducks, then as expected, Cheteshwar Pujara (54 off 140) and  Rahane held the fort. For the Aussies, James Pattinson took three. Michael Neser and skipper Travis Head claimed a brace each.

12:20 PM IST: With another match, a three-day practice game, between the 'A' teams going on some 11 km away from SCG, the day is already warmed up. And also allowed us to look at possible XIs for the T20 match.

Here's a look at the A teams playing at Drummoyne Oval:

This is only the fifth match of a long tour, and how tables have turned? India were reeling under all sorts of pressure after losing the first two matches as Australia took a 2-0 in the ODIs -- injuries and uncertainties. Then, the change of venue brought about a change in India's fortunes. They salvaged some pride in Canberra, and settled the first-leg of the limited-overs series 1-2. Then, started the T20Is in the earnest, stealing the thunder Down Under albeit in controversial circumstances. Now, Virat Kohli & Co will take the field as hungry lions even as the Aussies fight injuries and well, uncertainties.