With Lionel Messi absent and Luis Suarez suffering a first-half injury, Barcelona were poor in their 1-0 defeat to Athletic Bilbao in LaLiga 2019-20 season opener. 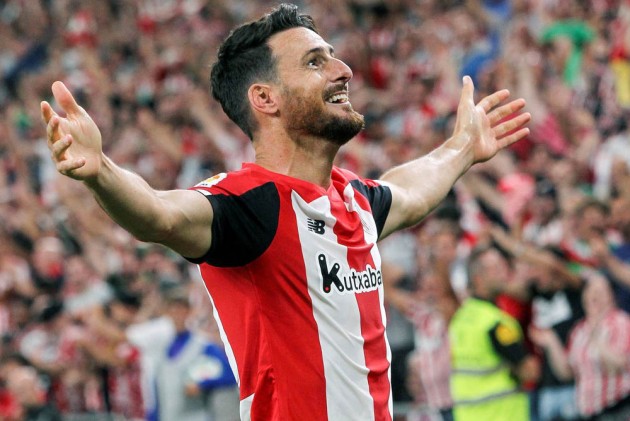 With Lionel Messi missing with a calf problem and Philippe Coutinho left out amid talks with Bayern Munich over a loan move, the Catalans were found wanting in attack against coach Ernesto Valverde's old club.

Antoine Griezmann and Frenkie de Jong made their league debuts for the champions, but there was little for them to celebrate as the 2019-20 season got off to a lacklustre start at San Mames.

The loss of Suarez to a first-half muscle problem only compounded what proved a frustrating outing for the visitors, who twice hit the woodwork before Aduriz's 89th-minute overhead kick secured all three points.

29 - Barcelona have hit woodwork 29 times vs Athletic Club since at least 2003/2004 season, more than any other opponent in #LaLiga. Smashed pic.twitter.com/H3HdaZF8VB

Fresh from signing a new nine-year contract this week, Inaki Williams wasted little time making an impact, stinging the palms of Marc-Andre ter Stegen from distance before seeing a low shot saved from inside the box.

Barca were struggling for early rhythm but were gifted a chance 31 minutes in, Suarez collecting Unai Lopez's reckless backwards pass and striking the base of the left-hand post.

It proved Suarez's last act of the game, the striker unable to continue due to an apparent calf injury, and his replacement Rafinha promptly hit the crossbar with a dipping strike moments after coming on.

Ivan Rakitic was introduced at the break and sent a good strike narrowly over the crossbar, but Barca's build-up play was sorely lacking in attack despite their dominance of possession.

Their miserable outing was made worse with a minute of normal time left, as Aduriz, off the bench barely 60 seconds earlier, met Ander Capa's cross with a stunning bicycle kick to seal the three points.

What does it mean? For all their attacking talent, Messi still makes the difference

Even with Suarez, Griezmann and Ousmane Dembele on the pitch, Messi's absence was felt from the get-go in Bilbao.

The loss of Suarez did not help matters, but Barca offered a stark lack of creativity without their club captain. Whether Coutinho could have helped is another matter.

Perhaps this is a performance that underlines why Barca are apparently eager to bring back Neymar.

Ter Stegen stops a poor Barca from being worse

He did not exactly have lots to do, but Ter Stegen executed his tasks with customary efficiency, saving well from Williams and dealing confidently with crosses aimed at Raul Garcia. He could do nothing about the goal.

With Messi out, Suarez forced off and Coutinho seemingly on the way out, this was Griezmann's chance to make a real statement on his competitive Barca debut. It certainly did not happen.

Barca host Real Betis next Sunday, the day after Athletic head to Getafe.