It's TV At Home As German Football Returns With 'Ghost Games' 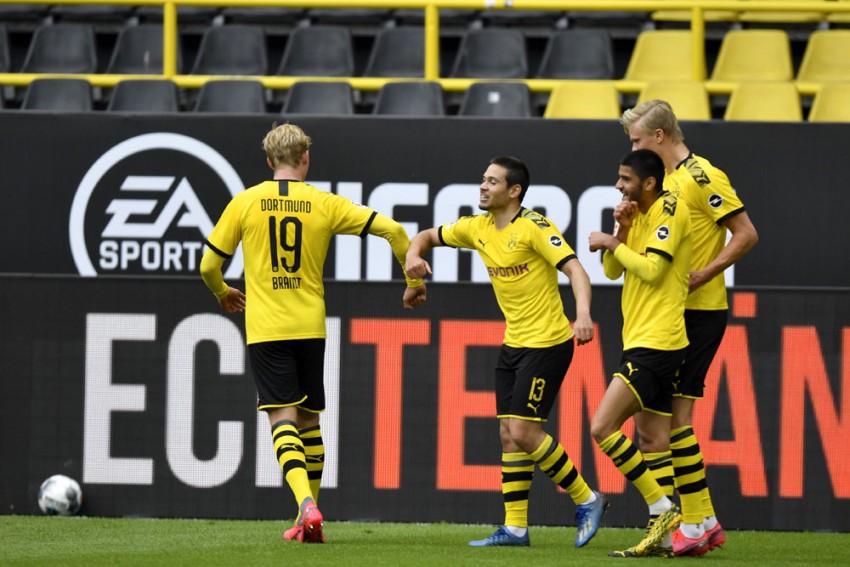 Dortmund's Raphael Guerreiro, center, celebrates with Julian Brandt after scoring his side's second goal during the German Bundesliga soccer match between Borussia Dortmund and Schalke 04 in Dortmund, Germany, Saturday, May 16, 2020. The German Bundesliga becomes the world's first major soccer league to resume after a two-month suspension because of the coronavirus pandemic.
AP Photo
Agencies 2020-05-16T20:38:47+05:30 It's TV At Home As German Football Returns With 'Ghost Games' 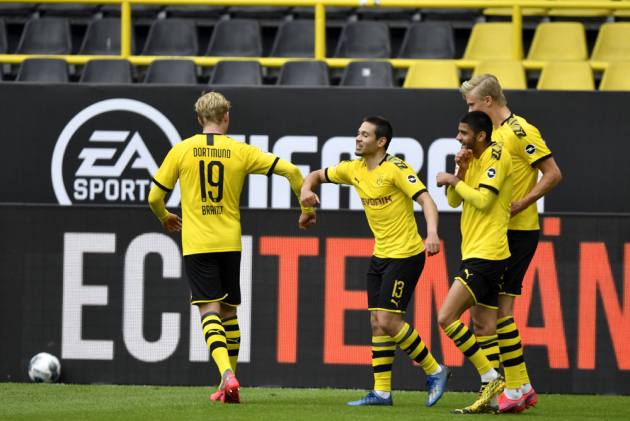 Nicole Bartelt has been a loyal fan at all but two of Borussia Dortmund's home matches since 2008, but when the Bundesliga restarted Saturday after a two-month hiatus because of the coronavirus, she was forced to keep away from the stands.

Nevertheless, Bartelt, 44, was not complaining that the derby with Schalke was played behind closed doors.

"It's better to have 'ghost games' to slow the epidemic than to have a health catastrophe," she told AFP.

"Even if we detest Schalke, a season without such a derby doesn't have the same flavour," added Bartelt, wearing a black Dortmund jersey.

Bartelt watched the game from her friends' place.

Likewise, Marco Perz, 45, who has been a regular at Dortmund matches since 1987, was in front of the television at his friends'.

"It's sad that matches are played in empty stadiums, but it's better than nothing -- the more we keep to health rules, the sooner we can return to normality," said Perz, with a beer in hand.

It would be "absurd and dangerous" to not allow the season to run its course, said Perz, who was wearing a jacket emblazoned with a dozen Dortmund logos.

"Not necessarily for the players, who may have to buy one less Lamborghini, but for the economy that depends on it -- the technicians, gardeners, fan shops.

On a match day, some shops, including fast-food stands, rake in revenues equivalent to that of a normal week."

Unlike typical match days when the city centre would be buzzing with fans, the atmosphere downtown this time was muted.

Pubs and restaurants have reopened, but they are far from full for the match.

"We can take in only 50 people, compared to 500 usually," said Joerg Kemper, who manages Wenkers pub, popular with Dortmund fans.

"People are also not very comfortable about gathering in the current context," he told AFP.

In the pub, decked out with a dozen black and yellow BVB jerseys, the flooring is now marked with tape denoting the required physical distance.

"Usually such a derby would draw euphoria but this time, we're happy even with very little," he said, adding that on a regular match day, revenues are comparable to that of a week's takings.

Ahead of the match, police sent out repeated appeals on Twitter, urging fans to stay home to enjoy the game.

Police were in out in force, with several vans parked at the city centre and outside the main train station, with the twin task of stopping fans from assembling in large groups as well as to maintain order as anti-lockdown demonstrations were expected at the same time.

While stay-at-home measures have largely been lifted, social distancing rules keeping no more than two families from mingling are in place.

People are also required to stand 1.5 metres (five feet) apart, to avoid contagion of the virus.

Likewise outside the stadium, the atmosphere was markedly calm.

Only the occasional cyclists and people out for a stroll were to be seen while the shutters remained down over ticket-counters.

The only signs that something may be stirring were vest-clad stadium staff wearing face masks standing at the main entrances and police patrolling.

For some, the change was just too much to swallow.

Nicolai, a regular contributor on fan forum "Black-yellow" said he was boycotting the derby if he can't watch it at the stadium.

"Football won't be at the centre of the attention," he wrote.

Olympic Chief Calls For 'Vigilance And Patience' Ahead Of Tokyo Games