NorthEast United, with 10 points alongside ATK Mohun Bagan, are placed second in the ISL table while Chennaiyin FC have now failed to pick up a win in their last four matches, and are eighth 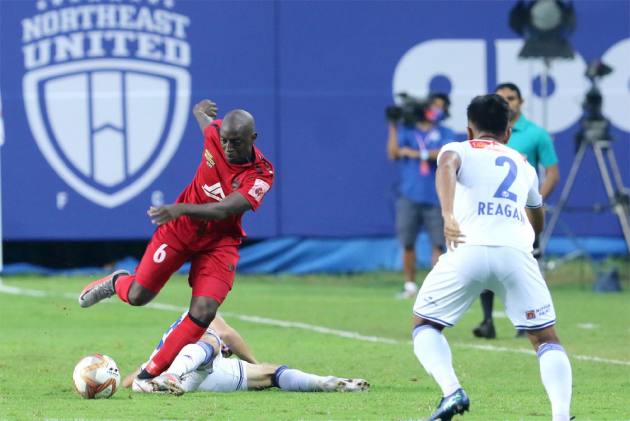 NorthEast United FC only managed to grab a point but extended their unbeaten run in the Indian Super League (ISL) Season 7 as they drew 0-0 with Chennaiyin FC at Tilak Maidan Stadium, Goa on Sunday. (More Football News)

The Highlanders, with 10 points alongside ATK Mohun Bagan, are placed second in the ISL table while Chennaiyin FC have now failed to pick up a win in their last four matches.

NorthEast United made three changes to the side as Idrissa Sylla started upfront ahead of Kwesi Appiah. Meanwhile, Chennaiyin made two changes to their line-up with Anirudh Thapa among the substitutes.

The first-half was a goalless affair. Chennaiyin shaded possession but both sides lacked the cutting edge in the final third. NorthEast keeper Gurmeet Singh was called into action early on as Chennaiyin created a chance as early as the first minute. Lallianzuala Chhangte received a long ball from Jakub Sylvestr in the box but his shot was carried away by Gurmeet. Five minutes later, Edwin Vanspaul had another opportunity to put Chennaiyin ahead. The midfielder pounced on a loose ball following a clearance, only to see his effort narrowly miss the far post.

NorthEast too had their chances and in the 18th minute, nearly came close to breaking the deadlock. Benjamin Lambot, unmarked in the box, won a free header from a corner but failed to place his effort on target. Another big opportunity went begging for the Highlanders in the 38th minute, again coming through a set-piece. Luis Machado whipped a teasing cross into the box from a corner for Dylan Fox, who only managed to fire his effort over the crossbar.

Both teams began the second half with intent. The Highlanders created a clear-cut chance in the 55th minute only to be denied by Chennaiyin keeper Vishal Kaith. VP Suhair received the ball on the left flank and fired a cross into the box for Sylla, whose powerful shot was tipped over the crossbar. Chhangte had another opportunity to score the opener before the hour mark. After receiving the ball on the rebound after a save from Gurmeet, the winger placed his effort over the bar from close range.

However, the best chance of the game arrived during the 66th minute and NorthEast should have taken the lead. Substitute Rochharzela split the Chennaiyin defense with a lovely through ball for Sylla. The striker, with only Kaith to beat, poked his shot inches wide of the post.

Gerard Nus' side continued to threaten Csaba Laszlo's men towards the dying minutes of the game but failed to find a winner.