Defending Indian Super League champions Bengaluru FC found the breakthrough through Udanta Kumam in the 62nd minute, however, in dramatic fashion, FC Goa's Ferran Corominas won a penalty in injury time and converted it himself to salvage a point for his team 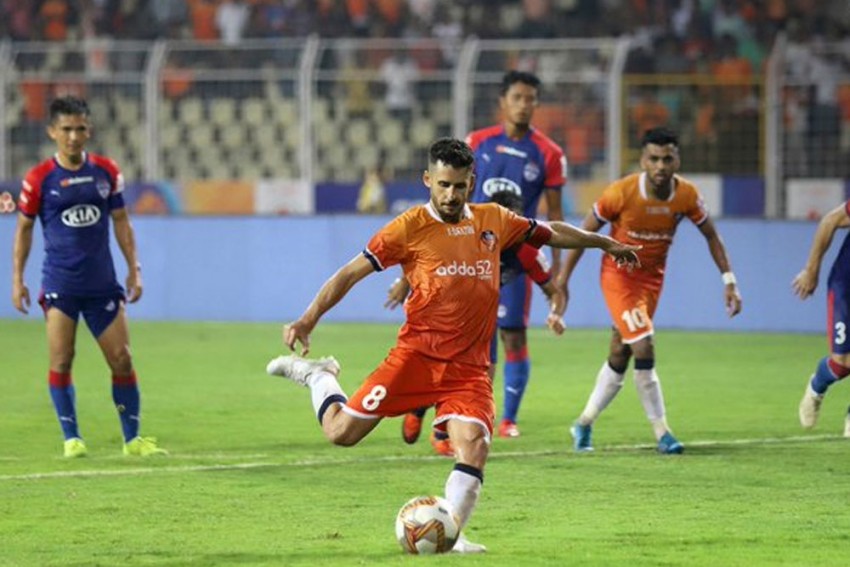 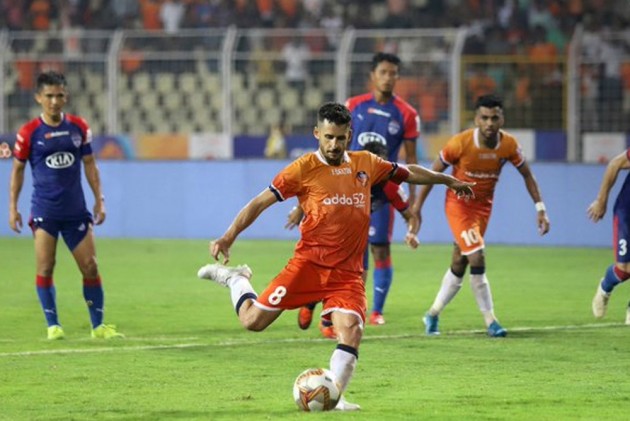 The first meeting of the season between the two Indian Super League (ISL) heavyweights finished all square after FC Goa and Bengaluru FC shared the spoils in a 1-1 draw at Margao on Monday.

In what was a fiercely contested game in midfield, the teams struggled to carve out clear-cut chances but the visitors, who produced the better output in the final third, found the breakthrough through Udanta Kumam in the 62nd minute.

However, in dramatic fashion, Goa's Ferran Corominas won a penalty in injury time and converted it himself to salvage a point for his team at the Jawaharlal Nehru Stadium.

The result sees FC Goa join Mumbai City FC and NorthEast United FC at the top of the table with four points from two games while Bengaluru have now played out a second consecutive draw.

The goalkeepers were called into action within the first ten minutes of an intriguing game.

Corominas played a good ball forward to Manvir Singh who released Seiminlen Doungel in behind the Bengaluru defence with a clever through-ball. But goalkeeper Gurpreet Singh Sandhu rushed off his line just in time to collect the ball.

At the other end, Udanta's looping cross from the right was punched away by Goa custodian Mohammed Nawaz.

The teams resorted to a cautious approach when going forward after the early hustle. Bengaluru had more of the ball than the home side but chances were few and far between.

Seriton Fernandes took matters into his own hands when he picked up the ball in midfield, danced his way past a couple of defenders and played the ball to Ahmed Jahouh with the game nearing half-time.

The Moroccan midfielder tried to chip a cross into the box for Manvir but Ashique Kuruniyan, playing at left-back, made a timely interception. At the other end, a Dimas Delgado corner-kick almost bulged the net directly but Doungel's header from the line kept the match goalless at the break.

The hosts enjoyed a period of dominance after the break, with the likes of Ahmed Jahouh and Ferran Corominas getting slightly more time on the ball. The Spanish striker was fouled as he tried to dribble into the box close to the hour-mark but Brandon Fernandes sent the resulting free-kick high and wide.

Goa couldn't score during the period they were on top and Bengaluru handed out the punishment in the 62nd minute. Udanta collected a simple flick from Manuel Onwu at the edge of the box, outfoxed Mourtada Fall with a sublime touch and slotted the ball past Nawaz to score with the game's first shot on target.

Udanta's agility got the better of the Goa defence again on the right flank a few minutes later but the winger's cross to Chhetri inside the box was cut out by a vigilant Seriton.

FC Goa came alive in the final minutes of the game, with Jackichand Telem wreaking havoc on the right flank and creating two big chances in as many minutes. His drilled crosses on both occasions failed to find a teammate inside the box, much to the relief of the visitors.

But there was drama right at the end. With Bengaluru on the verge of victory, a clumsy challenge by Ashique Kuriniyan on Corominas after the youngster lost the ball resulted in the referee pointing to the spot.

Corominas converted coolly from 12 yards to send the home supporters into delirium and earn a point for his team.