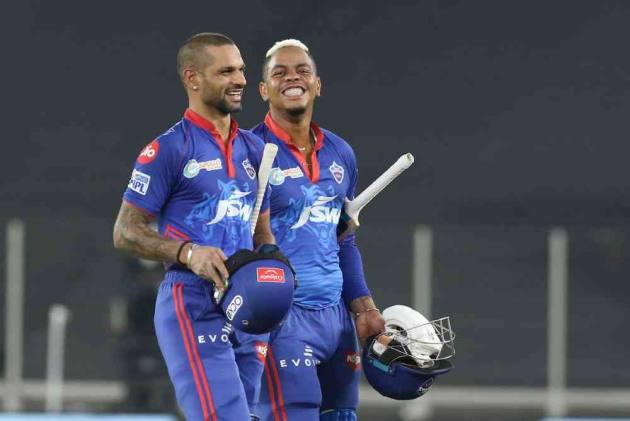 Delhi Capitals beat Punjab Kings by seven wickets in an IPL game in Ahmedabad on Sunday. Delhi Capitals have now jumped to the top of the table with 12 points from 8 matches. Asked to take bat first, stand-in skipper Mayank Agarwal hit an unbeaten 58-ball 99, while debutant Dawid Malan (26) added 52 runs in the partnership as Punjab posted 166 for six. Shikhar Dhawan then smashed an unbeaten 69 off 47, while other opener Prithvi Shaw (39) and Steven Smith (24) also chipped in as DC chased down the target in 17.4 overs. For DC, Kagiso Rabada (3/36) claimed three wickets, while Avesh Khan (1/39) and Axar Patel (1/21) accounted for one wicket apiece. Earlier, Punjab decided to hand England's David Malan his IPL debut, dropping out of form West Indies batsman Nicholas Pooran. Brief Scores: Punjab Kings: 166 for 6 in 20 overs (Mayank Agarwal 99 not out; Kagiso Rabada 2/36), Delhi Capitals: 167 for 3 in 17.4 overs (Shikhar Dhawan 69 not out; Riley Meredith 1/35). Highlights of PBKS vs DC here.

7:30 PM IST: Mayank Agarwal and Prabhsimran Singh to open for Punjab Kings, while Ishant Sharma has the ball in hand for Delhi Capitals. Scroll down for live commentary

7:05 PM IST: Delhi Capitals have won the toss and are going to bowl first.  Delhi Capitals are unchanged. Punjab have been forced to make changes Dawid Malan comes in for Nicholas Pooran.

6:55 PM IST: Welcome to the coverage of Punjab Kings Vs Delhi Capitals match. PBKS suffered a huge blow when their skipper KL Rahul was ruled out due to appendicitis. Dawid Malan looks all set for debut as he has been handed the team cap in the huddle by none other than Chris Gayle. Mayank Agarwal is leading the side.