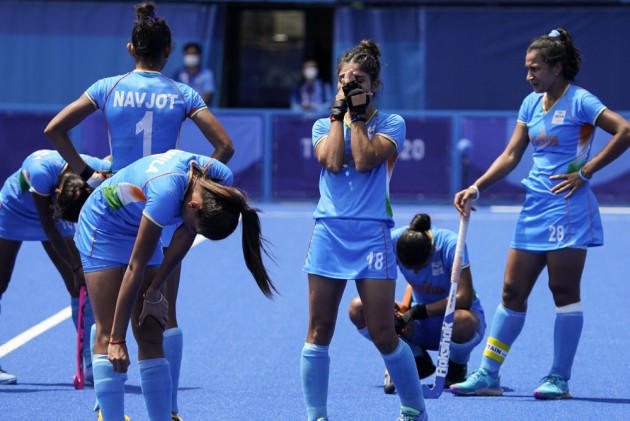 The history-making Indian women's hockey team's dream of securing its maiden Olympic medal remained unfulfilled as it lost 3-4 to Great Britain in a hard-fought bronze play-off match at the ongoing Games in Tokyo on Friday.

The Indian women had already created history and surpassed all expectations by entering the semifinals of the Games for the first time.

But the maiden Olympic medal remained out of bounds as world no.4 Great Britain, who were gold-winners in the 2016 Rio Games, came out on top in the pulsating encounter.

The heartbreak came a day after the Indian men's team ended a 41-year-old medal drought by clinching bronze with a 5-4 win over Germany.

The Indians played their hearts out and overcame a two-goal deficit to lead 3-2 at half time. But a desperate Great Britain gave their everything in the second half and scored two goals to snatch the match from India's hands.

India's best performance in the Olympics was a fourth place finish in the 1980 Moscow Games. In that edition, there were no semifinals as only six teams competed in a round-robin format with the top two featuring in the final.

As expected, Great Britain started strongly and had the lion's share of ball possession and chances in the first quarter.

The Indians made some circle penetrations but failed to create any clear cut chances and were also guilty of losing possession at the midfield.

She first made a fine save from Great Britain's first penalty corner in the second minute and then pulled off a double save in the 12th minute to keep India in the hunt.

In between Great Britain also wasted another penalty corner.

Britain began the second quarter on the same pace and took the lead when Elena Rayer's push went into the net after getting a deflection of Deep Grace Ekka's stick.

Lalremsiami came close to equalising for India only to be denied by the experienced Maddie Hinch, who brilliantly kept away the Indian striker's reverse hit.

India got their first penalty corner soon but wasted it.

Great Britain doubled their lead in the 24th minute when Robertson scored with a powerful reverse hit from top of the circle.

A minute later, India got two back-to-back penalty corners and Gurjit converted the second chance to reduce the margin.

Two minutes later, Salima Tete's brilliant run from the left flank earned India another penalty corner and Gurjit was once bang on target to draw parity.

The momentum shifted completely in India's favour as they started to attack with numbers and threatened the Great Britain goal frequently thereafter in the second quarter.

After Sharmila Devi hit wide from a one-on-one situation, the Indians stunned Great Britain when Vandana tapped in an open ball inside the circle to go into half time with a 3-2 lead.

Down by a goal, Great Britain were expected to come out hard after resumption and they did exactly that forcing the pace of the game, securing a penalty corner two minutes into the third quarter but India defended well.

The Indians then secured two more penalty corners but couldn't utilise them.

Savita stood like a wall in front of the Indian goal and pulled off some brilliant saves to deny Great Britain.

A second from the end of third quarter, India secured the seventh penalty corner but to no effect.

The fourth quarter completely belonged to Great Britain as they pressed hard on the Indian defence in search of goals.

The ploy worked as the Indian backline wilted under pressure and conceded four quick penalty corners, three of them in succession and Baldson scored from the last one with a flick that went through Savita's legs.

India had one more chance in the form of a penalty corner in the last eight minutes but Great Britain defended stoutly to deny Gurjit a hat-trick.

Thereafter, Great Britain did just enough to keep India at bay and to ensure a finish on the podium.