In his interaction with Indian athletes, Prime Minister Narendra Modi said the ability to face challenges, self-discipline, positivity and self-belief, which are essential to sports, are crucial tools to combat the spread of the coronavirus as well 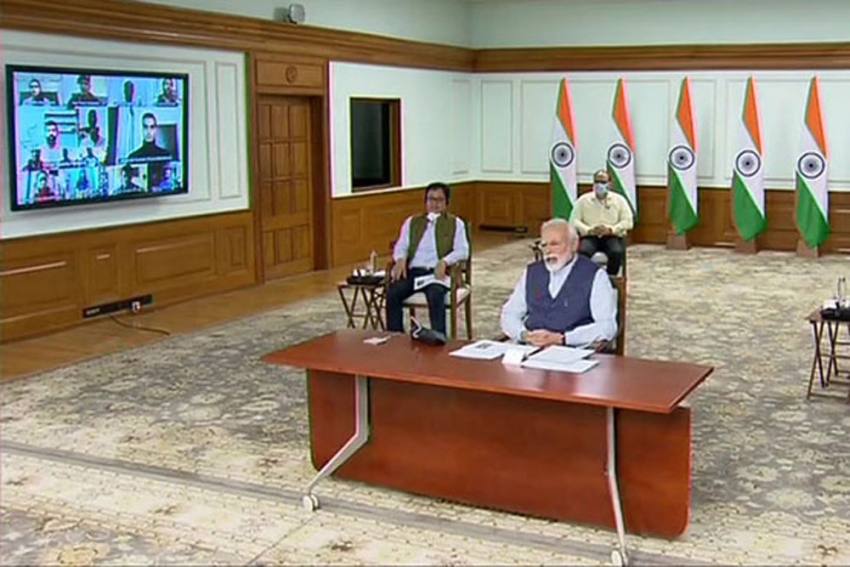 The athletes, along with sports minister Kiren Rijiju, participated in nearly an hour-long video call which started at 11am. The country is in a 21-day lockdown to contain the spread of the virus.
Outlook Web Bureau April 03, 2020 00:00 IST India Fights COVID-19: PM Narendra Modi Interacts With Sachin Tendulkar, PV Sindhu And Others - Who Says What 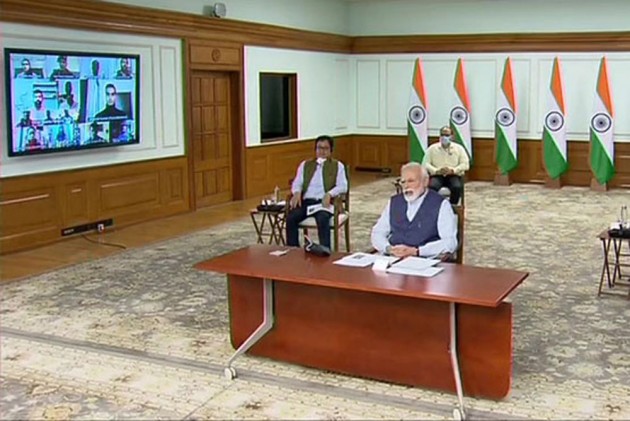 From Sachin Tendulkar stressing on the need to keep the vigil even after the lockdown ends on April 14, to sprinter Hima Das expressing sadness at the recent attacks on frontline warriors such as health care workers and police officers, to others sharing their experience of being in a lockdown, the sportspersons had lots to offer during their interaction with Indian Prime Minister Narendra Modi. All these athletes have been generous donors to the funds being raised to fight the crisis.

The Prime Minister, on his part, sought their support to raise awareness about the need for social distancing and personal hygiene at a time when the total number of COVID-19 positive cases in India has crossed 2,000.

Cricket legend Tendulkar said managing the period after April 14 would be crucial to how India fares in its battle against the COVID-19 pandemic, a belief which was shared by the PM during a video conference with sportspersons.

"He (PM Modi) highlighted and reaffirmed my belief that we should not let our guard down after the 14th of April, & how we manage that period will be very critical," Tendulkar said in a statement after the interaction.

The Prime Minister, on his part, sought their support to raise awareness about the need for social distancing and personal hygiene at a time when the total number of COVID-19 positive cases in India has crossed 2,000.

Like everyone else, Tendulkar is also practising social distancing and said he now folds his hands to say 'Namaste' instead of shaking hands.

"I also suggested that as much as possible, I will use our way of greeting - saying 'Namaste' instead of shaking hands, even after we overcome this pandemic," he said.

Tendulkar was among the 40-odd elite sportspersons with whom the PM had a one hour video call to discuss the prevailing situation which has claimed more than 50 lives in India with 2000 plus positive cases. The country is currently in a 21-day lockdown which ends on April 14.

But BCCI president Sourav Ganguly, when asked about the development this morning, said, "Yes, I will be joining our Honourable PM via video call." But he refused to go into the details.

The athletes, along with sports minister Kiren Rijiju, participated in nearly an hour-long video call which started at 11am. The country is in a 21-day lockdown to contain the spread of the virus.

Here's what other athletes said:

PV Sindhu - "We all should thank you sir for taking the measures and you also told we all come out and applaud the doctors and policemen, who are doing a great job," Rio Olympic badminton silver medallist and world champion said.

Sindhu also told the prime minister that the 21-day lockdown was a very good decision, "It is a very good decision where everyone of us should maintain the social distance which is very important right now. If we come out we are meeting friends, going here and there. We never know where the virus is spreading. I think this social distance will definitely will make a difference."

Hima Das - "I told him that it is sad that health care workers and police have been attacked," said Asian Games medallist, who is employed with Assam Police as a DSP.

Sharath Kamal - "The PM asked us to spread awareness on social distancing and hygiene. He spoke about how we need Virat's (Kohli) fighting spirit to win this battle," said the veteran table tennis player.

Abhishek Verma said the PM urged athletes "to be positive and spread positivity".

"He said appreciate and highlight the work of frontline workers. Take good care of yourself and family at home. He asked us to e-mail any suggestions we have on how to handle the situation better," World championship silver-winning shooter added.

Deepika Kumari - "PM Sir urged us to post videos about the awareness campaign. He gave us a few pointers like 'Laxman Rekha' (Don't cross the line while maintaining social distancing); 'Sankalp Lena' (Taking a pledge not to step out).

"He said 'Dhairya Rakhna' (don't press the panic button). He also advised us to boost our immune system and stay fit by doing daily exercises," the Olympic-bound archer revealed.

"(He) told us that athletes are stronger mentally and have the quality to adapt to different conditions and in unknown territories. So he wanted us to spread the positive and encouraging message since this is also an unknown territory (fight against coronavirus)," she added.

Former world champion weightlifter Saikhom Mirabai Chanu said the PM urged everyone to be united in the fight to combat the pandemic.

All sporting activities are currently shut in the country and it is still not clear when normalcy will resume. The much-anticipated Indian Premier League is among the big-ticket Indian events suspended till April 15.

The deadly outbreak has caused more than 50 deaths in India. The global death toll has crossed 50,000.