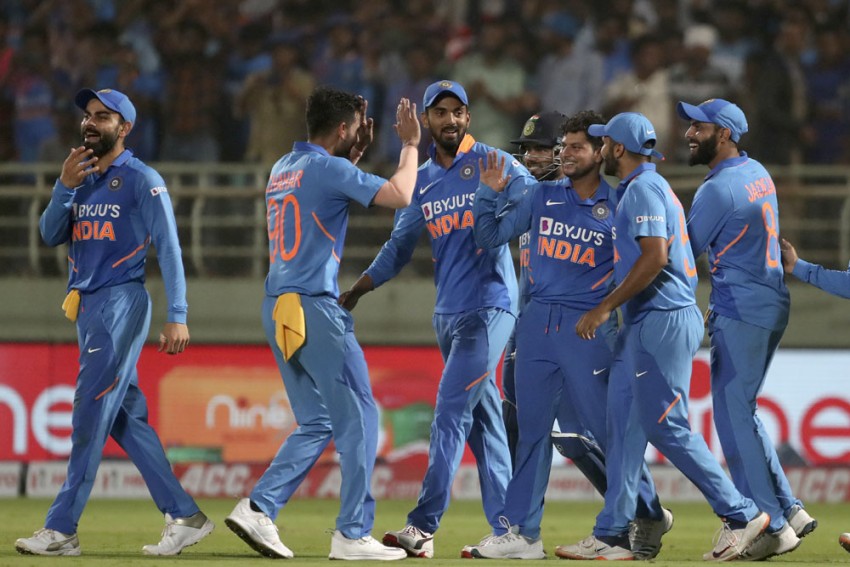 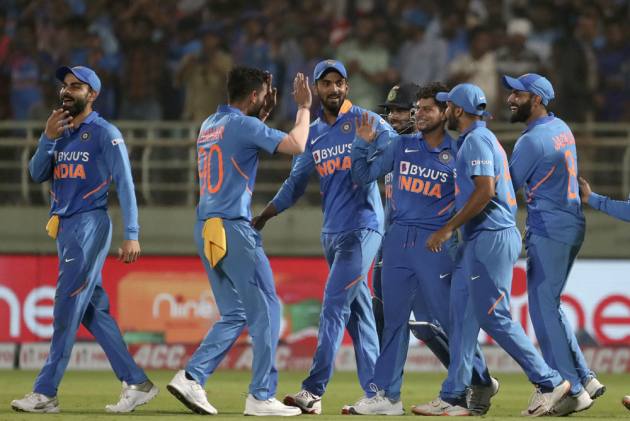 Rohit Sharma captivated with his languid brilliance in the company of an equally graceful KL Rahul before Kuldeep Yadav topped it up with a hat-trick in India's series-levelling 107-run victory against the West Indies in the second one-dayer at Visakhapatnam on Wednesday.

Rishabh Pant (39 off 16 balls) and Shreyas Iyer's (53 off 32 balls) thoroughly entertaining 72-run stand in only four overs also provided the impetus required during a final flourish.

It was Mohammed Shami (3/39 in 7.3 overs), who removed the dangerous Nicholas Pooran (75 off 47 balls) and skipper Keiron Pollard (0) off successive deliveries to spark a West Indies collapse.

Kuldeep (3/52 in 10 overs) then removed the dogged Shai Hope (78 off 85 balls), Jason Holder (11) and Alzarri Joseph (0) off successive deliveries to seal the issue in favour of India. This was his second hat-trick in ODIs. He became the first Indian player to claim two hat-tricks in international cricket.

On a shirtfront of a track, West Indies was never going to make a comeback after losing five wickets for 18 runs and it was only a matter of time before India ended their four-match losing streak at home. The decider will now be played at Cuttack on December 22.

Rohit, as usual, batted at his own pace and looked like the bandmaster of an orchestra, who made the Caribbean bowlers dance to his tune.

Sheldon Cottrell (2/83 in 9 overs) was punished with such ferocity that he didn't have energy to do a customary 'Cottrell Salute' once Iyer was out and it was more or less similar for all others like Alzarri Joseph (0/68 in 9 overs) and Keemo Paul (0/62 in 9 overs).

It was also a perfect demonstration on how to press the accelerator in this format -- first 50 off 67, the next off 40 balls and the last off only 25.

The innings had 17 boundaries and five sixes and Rohit played the same shot again and again. It was a swivel off his hips between fine leg and deep fine leg to rising deliveries.

The West Indies bowlers were wary of pitching it up to him fearing his drives but ended up bowling short on the hips and the Indian gleefully played the shot again and again.

At times, they did realise the mistake and pitched it up but then 'Retro Rohit' came out from nowhere playing 1980s slog shots, shuffling towards leg-stump and making room to hit over cover boundary.

There was a bowler's back-drive off Joseph to show who is the boss.

Incidentally, Rohit was much behind Rahul in the race for half-century but reached the three-figure mark before the Karnataka batsman.

When Rahul reached his hundred, he made a gesture which was something like shutting his ears from all the humdrum surrounding him. Whatever he meant, it seemed to have worked well for him.

The biscuit coloured 22-yard, devoid of any grass, was supposed to be a nightmare for the bowlers and it stayed true to its character.

As Rohit took his own sweet time to settle down, Rahul went on the offensive taking on Cottrell first up with a flurry of boundaries.

With the ball coming onto the bat nicely, Rahul hit his first six over point off Jason Holder and then hit left-arm spinner Khary Pierre for a six over long-on as the team total of 50 was reached.

By the time Rahul was into his 30s, Rohit hadn't crossed 20 but it was just a matter of time. Once his Mumbai Indians teammate Alzarri Joseph came into the attack, the pull shot also came out of the drawer.

Alzarri's extra bounce was exactly what Rohit required as he rode on top of it and played a range of strokes to slowly catch up.