Playing his first Test in India, Mayank Agarwal showed remarkable concentration and endurance for his monumental 215 off 371 balls that allowed the hosts to declare their first innings at 502 for seven in 136 overs. In response, South Africa were staring down the barrel at the close of play, at 39 for three for in 20 overs, trailing India by 463 runs 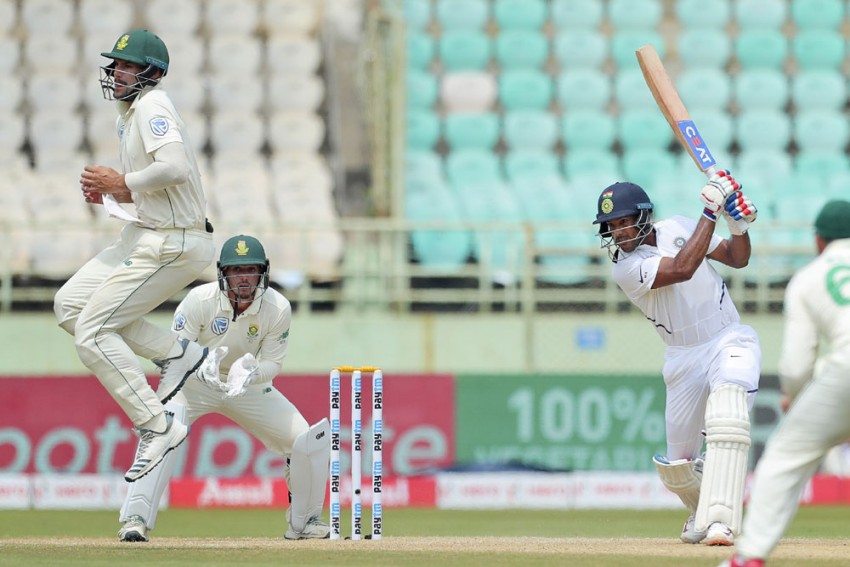 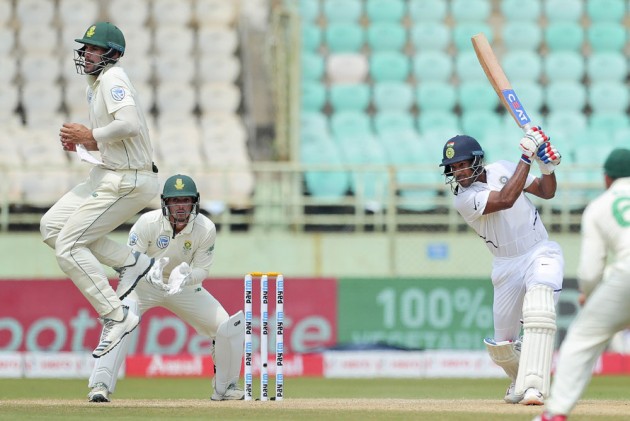 Mayank Agarwal showed an insatiable appetite for runs, converting his maiden Test hundred into a brilliant double before the Indian spinners tightened the noose around the exhausted South Africans on the second day of the series opener at Visakhapatnam on Thursday.

Playing his first Test in India, Agarwal showed remarkable concentration and endurance for his monumental 215 off 371 balls that allowed the hosts to declare their first innings at 502 for seven in 136 overs.

In response, South Africa were staring down the barrel at the close of play, losing Aiden Markram (5), Theunis de Bruyn (4) and nightwatchman Dane Piedt (0) under floodlights to be 39 for three for in 20 overs, trailing India by 463 runs.

Ravichandran Ashwin provided the breakthroughs by getting through the defences of Markram with a classical off-break that turned sharply. He then had De Bruyn caught behind before Ravindra Jadeja crashed through Piedt's defences.

While day one was all about Rohit Sharma (176 off 244), the second day certainly belonged to Agarwal, who made full use of friendly batting conditions.

Barring lead pacer Vernon Philander, the South African bowling put up an ordinary show with their three specialist spinners failing to get much out of the dry and slow surface.

Rohit and Agarwal, who began the day on 115 and 84 respectively with India at 202 for no loss, converted their opening partnership into a record-breaking one with a 317-run stand before lunch.

With their massive stand, they surpassed Virender Sehwag and Rahul Dravid to record India's highest partnership for any wicket against South Africa.

Agarwal stole the show after Rohit’s departure and keeping the requirement of the team in mind, increased the intensity of his innings. His first hundred came off 204 balls and second off 154 balls.

The Bengaluru-based cricketer, whose previous four Tests were in Australia and West Indies, collected 23 fours and six maximums, most of them coming against the spinners.

He batted for the majority of the afternoon session, which was extended by 30 minutes to make up for overs lost due to rain on the first day.

Agarwal's memorable knock came to end when he smashed a full ball from Dean Elgar towards deep mid-wicket and a diving Piedt took a diving catch.

At tea, India coasted to 450 for five, scoring 126 runs in the session at the loss of four wickets.

South Africa struck through pacer Vernon Philander's first ball after lunch, raising hopes of a South African fightback. Cheteshwar Pujara (6) was the man dismissed, bowled off a Philander beauty that moved away just enough to rattle his off-stump.

Captain Virat Kohli (20) joined Agarwal in the middle and looked in sublime touch during his short stay.

He was disappointed to get out after getting set. A regulation ball stopped on Kohli, who ended up offering a simple return catch to debutant Senuran Muthuswamy, giving the South African his first international wicket.

In the morning session, Agarwal completed his maiden Test hundred while Rohit Sharma made 176 on his opening debut.

Rohit, who too hit 23 fours and half a dozen sixes like Agarwal, was eventually dismissed in the 83rd over. At lunch, India were 324 for one in 88 overs with the host scoring 122 runs in the session at 4.28 runs per over.

Like on day one, Philander created some discomfort for the batsmen in the opening hour but apart from that, it was smooth sailing for the home team.

Rohit was dropped on 125 off Philander when keeper Quinton de Kock, who was standing up to the stumps, fumbled to take a sharp catch.

Two balls from Philander kept low, taking both Rohit and Agarwal by surprise but after that, they toyed with the opposition attack. They got the boundaries at will, especially against the spinners and with the surface not doing much, playing reverse sweep became less risky.

After reaching three figures with a single, Agarwal stepped up the offensive. He dispatched Dane Piedt for a massive six over deep mid-wicket before reverse sweeping him for a four in the same over.