In A Sport Of Fine Margins, Why Glorification Of Hima Das Is Not Gold Class

With Sachin Tendulkar to the Prime Minister going ga-ga, Hima Das' recent gold medal-winning spree in Europe has taken social media by storm. The fact is the athlete herself knows where she stands vis-a-vis a world championship or medal in the 2020 Olympics.

On Tuesday, after her camp, the Athletics Federation of India were hounded by the media for interviews, Hima Das was virtually forced to record a "thank you" video acknowledging the massive 'publicity' she was getting after winning five gold medals in various competitions in Europe this month. While many celebrities like Sachin Tendulkar, Prime Minister Narendra Modi and Bollywood superstar Amitabh Bachchan lauded Hima's 'feat', hardcore analysts put the 19-year-old Assamese sprinter's performance in perspective -- it was not a glorious performance after all!

Among the fast-rising talents in world athletics, Hima Das is quick to grab eyeballs with her performances. But winning a gold medal is not enough in sports. While "coming first" in any sport is laudable, athletics, like cricket or football or even badminton depends on fine margins. In disciplines like athletics, especially track events, every race is quantifiable. A decimal of a second can make a huge difference between winning and losing.

The good thing is Hima Das, striving hard to recover from a back injury sustained during the Asian Championships in April in Doha this year, understands this. She is not celebrating her gold medals and in the video, she is only asking for "blessings" to achieve glory in the world championships in Doha in September and the Tokyo Olympics in the summer of 2020. Effectively, the normally effervescent athlete, like most sprinters are, wants to be left alone to focus on shaving off the crucial milliseconds to qualify for the world championships.

The International Association of Athletics Federations (IAAF) categorised two such events as 'F' grade, which is the lowest. Meanwhile, two other races fall under the 'E' category. While the classification of events is important, what's more important in an athlete's life are timings and injury management so as to peak at the right time in the season.

Hima knows where she belongs right now. In 400 metres, Hima is 87th. In 200m, she is 122nd. Also, her overall ranking is 1250, which is no where close to being an Olympic final contender. The ones Hima struck gold were club-level events. Her competitors were runners specialising in indoor 60m and 100m races.

The chart below will put Hima's position in perspective. She has miles to go. 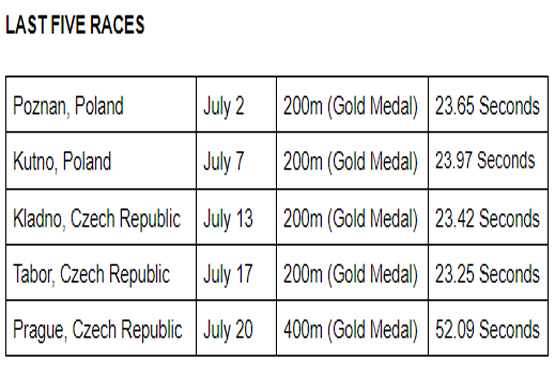 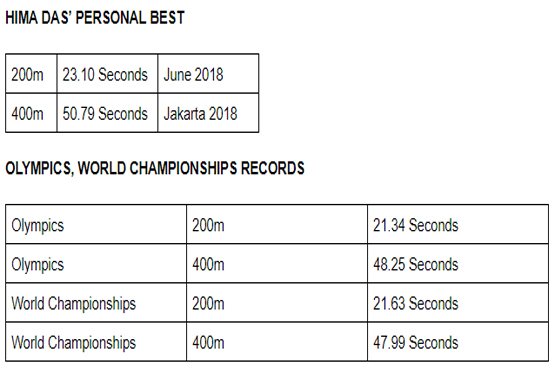 The upcoming Doha World Championships (September-October 2019) released their qualification standards in 2018. In 400m, for women it has been set at 51.80 seconds, meanwhile, for 200m, it has been set at 23.02 seconds. According to her recent 200m and 400m competitive timings, Hima Das needs to achieve qualifying standards first.

Most athletes she faced this month, never registered a personal best timing better than Hima'. Also, in her third race -- 200m -- in Kladno, the field was depleted after two if the six runners withdrew. Also, her final race (400m) in Prague was an all-Indian affair.

Professional athletes compete in five races in a month, until or unless it is for practice.

India's propensity to express its delirium over gold medals has often been found to be counter-productive. While Hima is the latest case, during the under-17 FIFA World Cup in India in 2017, the home team was branded as "a golden generation." Currently, most players don't find a place in their club playing XIs.

The semifinal defeat against New Zealand in the ICC Cricket World Cup 2019 broke India's heart. Virat Kohli's Team India were the overwhelming favourites to win the World Cup a third time. As it turned out, India lost in a game of fine margins. When we will learn our lessons?