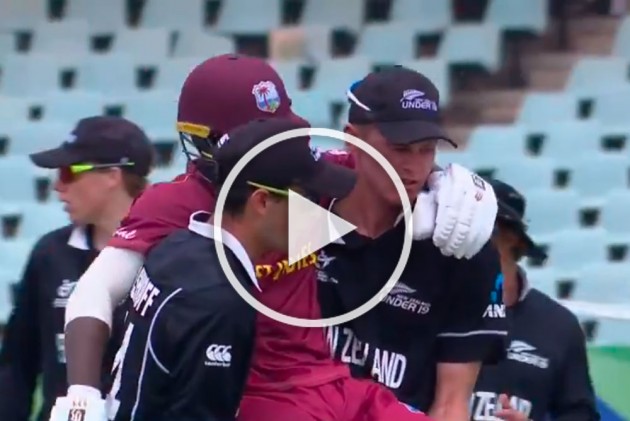 In one of cricket's defining moments, New Zealand U-19 cricket team players showed a heartwarming gesture during their ICC Youth World Cup quarter-final win over the West Indies at Benoni on Wednesday. (More Cricket News)

Showing true sportsmanship, Jesse Tashkoff and Joseph Field carried injured Windies batsman Kirk McKenzie off the field. McKenzie, who was the final batsman to be dismissed in the Windies innings, found it difficult to walk off the field due to cramps. It was then that the New Zealand players decided to carry the player off the field.

Cricket World Cup's official handle posted the video of the incident and captioned the post as, "An outstanding show of sportsmanship earlier today in the game between West Indies and New Zealand #U19CWC | #SpiritOfCricket | #FutureStars".

It's worth remembering that the New Zealand cricket team was awarded the MCC's Christopher Martin-Jenkins Spirit of Cricket Award for 2019 for their sporting conduct in the aftermath of the World Cup final against England.

After losing to England in a thrilling final held on July 14 at the Lord's -- regarded as one of the most exciting ODI matches of all time -- Kane Williamson's team displayed an exceptional level of sportsmanship, humility and selflessness in defeat.

In a thrilling encounter, Kiwis won the match in the last over. At once stage, New Zealand was struggling after being reduced to 153/8. Joey Field (38*) and Kristian Clarke (46*) took the Kiwis over the line.

In the semis, New Zealand will face the winner of the quarter-final clash between South Africa and Bangladesh.