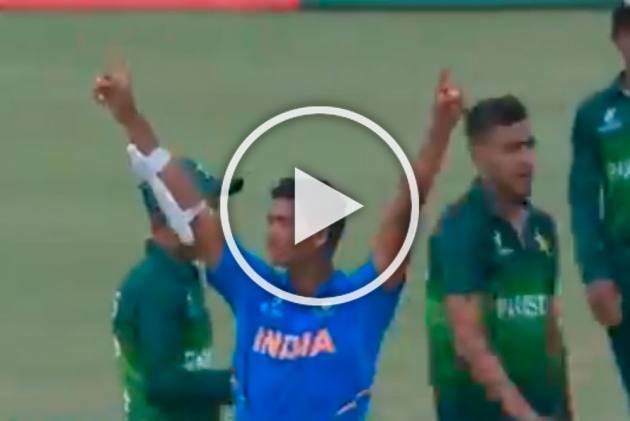 Yashasvi Jaiswal hit a majestic unbeaten hundred to help India thrash Pakistan by 10 wickets in the first Super League semi-final of the ICC U-19 Cricket World Cup at Bloemfontein on Tuesday, thus fulfilling his father's dream.

Bhupendra Jaiswal, Yashasvi's father, had expressed his desire to see the 18-year-old score a century against arch-rivals Pakistan. He launched the second ball of the 36th over for a mighty six to reach his hundred and guide India to a third successive final.

"I told him to register a win over Pakistan and you have to make a century today. We all hope that he will make a century and beat Pakistan," Bhupendra told earlier.

Yashasvi, also a legspinner, is one of the stars of the tournament. He entered the match with 207 runs.

His opening partner, Divyaansh Saxena also remained unbeaten (59 off 99 balls) as India chased down the target with consummate ease.

"I asked him not to take the pressure and play like you always do," she said.

Continuing his brilliant form in the tournament, the left-handed batsman hit 105 off 113 (eight fours and four sixes). He had previously scored 59 vs Sri Lanka, 29 not out vs Japan and 57 not out against New Zealand as India topped their group. In the quarter-finals, he scored 62.

Yashasvi's father said he wants his son to feature in the Indian cricket team and make the country proud.

"He has worked really hard and we want him to feature in the Indian cricket team and make the country proud," he said.

And it wasn't just a fluke. He is the youngest double centurion in the Vijay Hazare Trophy, the domestic 50-over competition. As an 11-year-old, he used to sold pani-puris.

Pakistan won the toss and opted to bat first. But the two-time were dismissed for 172.

India are the defending champions. In their previous meeting, at the same stage in 2018, India thrashed Pakistan by 203 runs.

India will face the winners of Bangladesh vs New Zealand semi-final match in the final on Sunday.