SA Vs BAN: After reaching the ICC Cricket World Cup quarter-finals in 2015, Bangladesh once again look capable of shaking up cricket's established order, much to the delight of their army of vociferous supporters 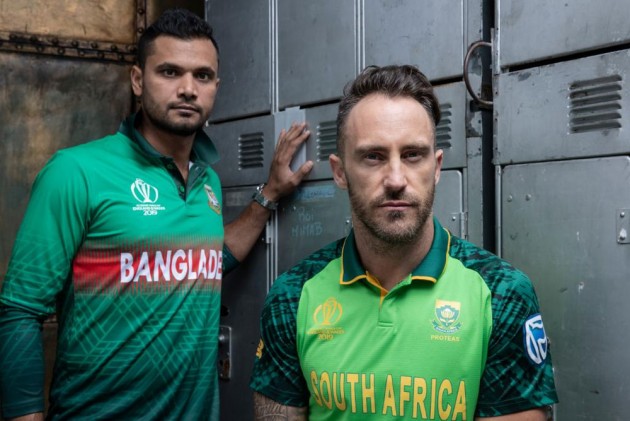 Bangladesh made the perfect start to their ICC Cricket World Cup 2019 campaign as their highest ODI score inspired a 21-run win over a beleaguered South Africa at The Oval on Sunday.

Mashrafe Mortaza's side posted 330 for six as Mushfiqur Rahim (78) and Shakib Al Hasan (75) laid the foundations of their impressive display at the Oval.

Mahmudullah's boisterous 46 not out from 33 balls pushed Bangladesh past their previous highest one-day international total of 329 for six against Pakistan in 2015.

Attempting to become the first team to successfully chase more than 330 to win a World Cup match, South Africa's bid to rewrite the record books fell short at 309 for eight.

After reaching the World Cup quarter-finals in 2015, Bangladesh once again look capable of shaking up cricket's established order, much to the delight of their army of vociferous supporters.

Catch all the updates on the  match here

A very good win for Bangladesh.

Bangladesh Not Far From A Deserving Win

Mohammad Saifuddin gets his second wicket of the day, courtesy a well-taken low catch to dismiss Phehlukwayo. FoW-252/6 (42.5 over). Chris Morris is the new man. Meanwhile, Shakib Al Hasan has completed his spell, for 1/50. South Africa need 72 from 36.

A delivery from Mustafizur Rahman ended David Miller's vigil. Caught at point by Mehidy Hasan. A flick and the ball flew to the point, leading edge probably. Bangladesh got their much-needed break. FoW - 202/4 (35.1 over). Jean-Paul Duminy is the new man, and Drinks.

Mehidy Hasan breached through the defence of Faf du Plessis in the 27th over. The South African captain made 62 off 53. Davi Miller got Rassie van der Dussen's company, and the duo has added 45 runs in 38 balls. Miller was lucky to survive. Soumya Sarkar dropped him in the 30th over. And there were some lucky runs too. South Africa were 192/3 after 33 overs. They need 139 more.

What A Way To Reach Fifty

South African captain raced to 45-ball fifty with a six off Mosaddek Hossain to reach the mini-landmark. Four fours and a six. 135/2 for South Africa after 25 overs. They need 196 runs at 7.84. David Miller is batting sensibly. Earlier, Aiden Markram was cleaned up by Shakib Al Hasan.

Confusion reigned supreme, resulting in the run out of Quinton de Kock. A dropped catch behind the wicket off Mehidy Hasan Miraz, but in the ensuing melee, Mushfiqur Rahim hit the stumps. de Kock made 23 off 32. FoW-49/1 (9.4 over). Faf du Plessis is the new man.

Innings Break, and some thoughts

A record 142-run third-wicket stand between two senior players, Shakib Al Hasan and Mushfiqur Rahim set the tone, then Mahmudullah gave the finishing touches. It seemed a good toss to win, but South Africa failed to the make the most out of it -- poor bowling and poor fielding, very uncharacteristic. That's probably why they are not one of the favourites. If they win, it will become the highest successful run-chase in the World Cup. The previous high was Ireland's epic 329/7 against England at Bengaluru in 2011.

14 runs from the last over, bowled by Kagiso Rabada (10-0-57-0), with Mahmudullah hitting the first ball for a six. And Bangladesh have their highest ODI total, 330-6.

No Celebration For South Africa

Chris Morris got his second scalp but ended up leaking 73 from his ten, including 14 from the last. He had Mosaddek Hossain (26 off 20) caught at mid-off fielder by Phehlukwayo. FoW-316/6 (48.6 over). Mehidy Hasan is the new man.

Mahmudullah dropped on 12 by Kagiso Rabada at square leg boundary and the ball dribbled away for a four. Unlucky Chris Morris, then Mosaddek Hossain hit the last two balls for fours. 15 runs from the 47th. Andile Phehlukwayo then completed his spell, for figures of 10-1-48-2. Bangladesh 300 for Bangladesh. Two overs remaining in the innings.

Bangladesh Continue To Push For A Big Total

The Tigers lost Mushfiqur Rahim for 78 off 80 balls to Andile Phehlukwayo, caught at deep backward point by van der Dussen (FoW-250/5 in 42.1 over), but they are shy 24 runs shy of that magical 300-run mark with four overs to play. Mosaddek Hossain is the new man.

Imran Tahir bowled Mohammad Mithun. FoW-242/4 (39.4 over). But Bangladesh are looking for a big total. hard-hitting Mahmudullah is the new man. Mushfiqur Rahim is unbeaten on run-a-ball 75.

Shakib-al-Hasan and Mushfiqur Rahim posted a World Cup record 142 runs for the third wicket for Bangladesh, which is one run more that than the fifth-wicket stand stitched by Mahmudullah and Rahim against England in 2015. In that edition, Shakib and Rahim also produced a 114-run 5th wicket stand against Afghanistan.

This stand between Shakib Al Hasan (67 off 75) Mushfiqur Rahim (69 off 64) is killing South African spirits. 132 runs in 128. And Drinks arrived. Faf du Plessis has used seven bowlers so far, with Andile Phehlukwayo and Chris Morris only the successful ones.

Shakib Al Hasan and Mushfiqur Rahim added 75 runs in 74 balls. Their collective cause was helped by sloppy South African fielding. Bangladesh well placed at 150/2 after 24 overs.

A single off the last ball of the 16th over, and Bangladesh are 100 for two. No sign of milestone man, Imran Tahir yet. 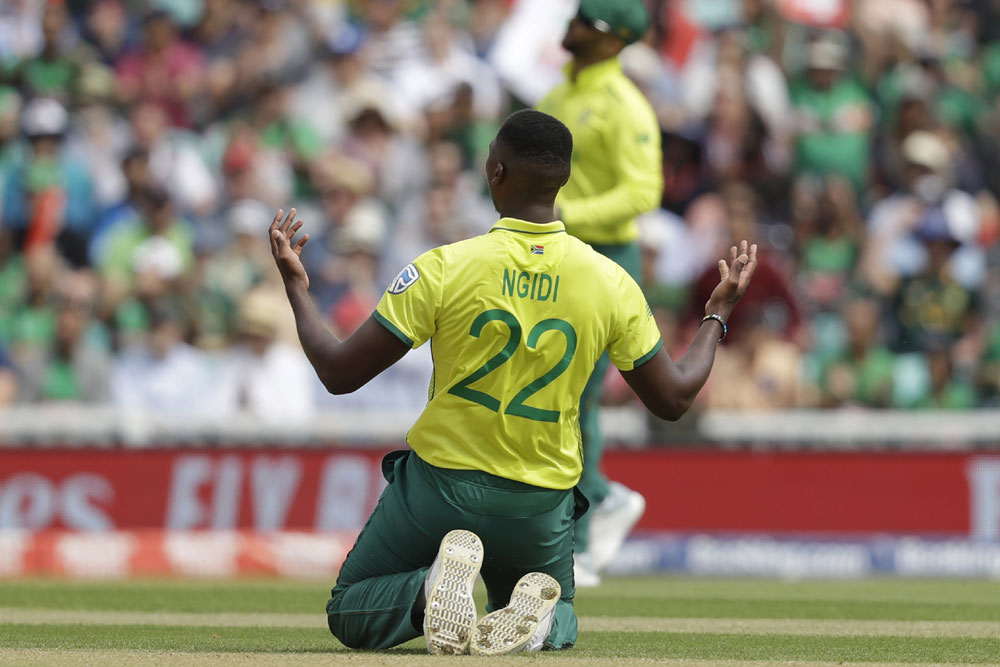 Smoke on the Water riff played without a pick on a modified bat-guitar. Mark Nicholas is now an official Deep Purple band member. And that brings us to the first wicket of the day. Andile Phehlukwayo had Tamim Iqbal caught behind for 16 off 29. FoW-60/1 (8.2 over). Shakib Al Hasan is the new man.

Good Start For Tigers, And Delay

A four off the last ball of the seventh over, by Tamim Iqbal, and Bangladesh are 50/0. Soumya Sarkar wants a new bat, a time-consuming exercise. And it's pretty early in the match.

Barrage Of Short Stuff, But...

A barrage of short and nasty stuff from Lungi Ngidi and Kagiso Rabada. But runs also coming. In the fifth over, Soumya Sarkar hit Ngidi for three fours, including an edge. A wasted chance for South Africa. Bangladesh 37/0 after six overs. 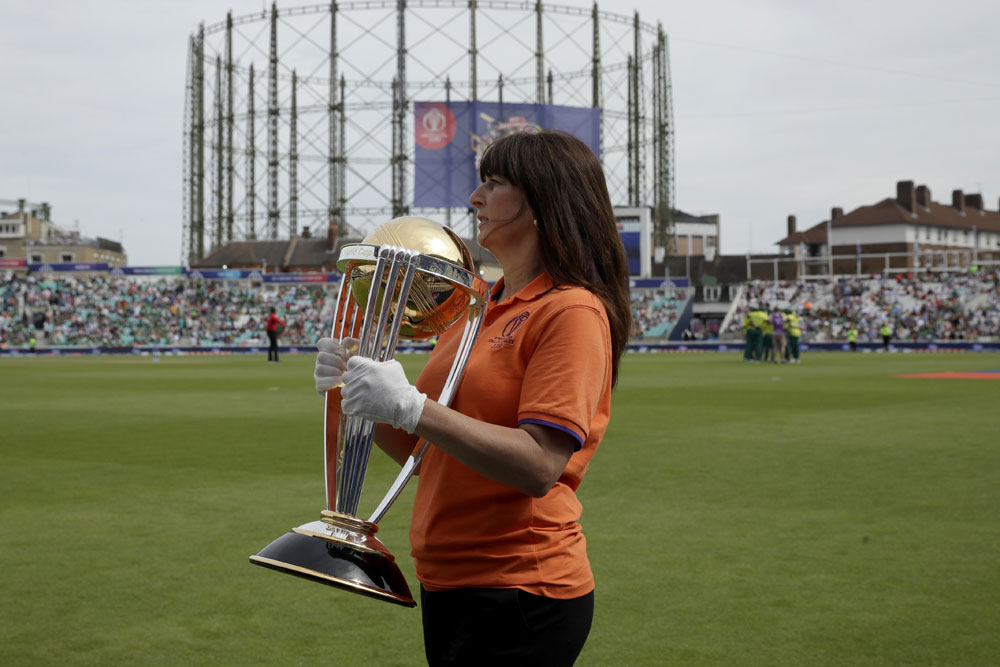 The trophy everyone is fighting for. AP Photo

Tamim Iqbal and Soumya Sarkar opened for the innings for Bangladesh. Lungi Ngidi with the first new ball for South Africa. And the first ball to Iqbal. 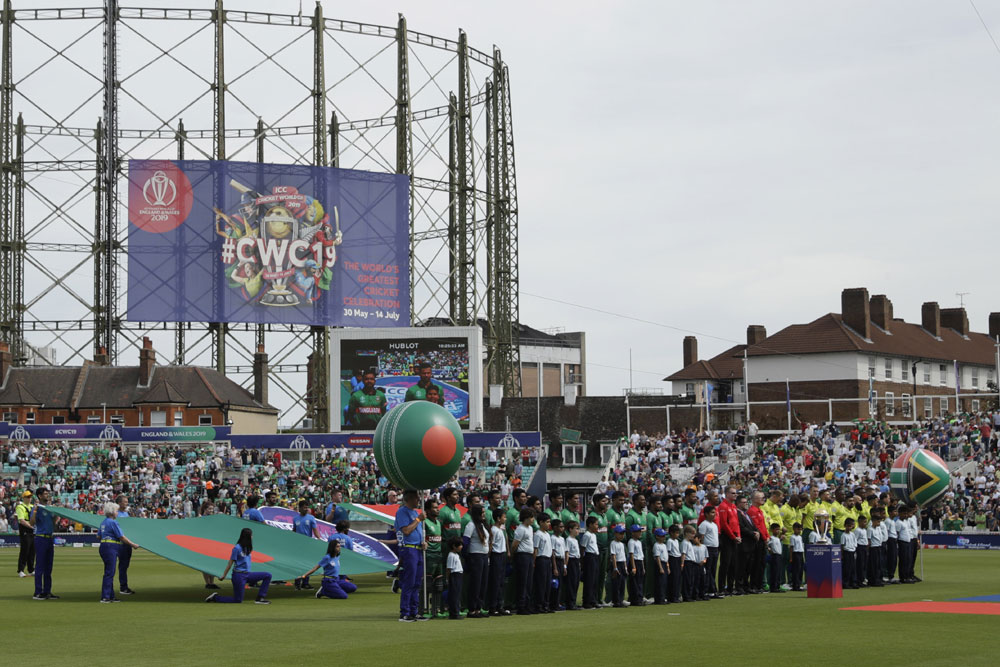 South African and Bangladeshi teams line up for the national anthems at the Oval in London. AP Photo

South Africa captain Faf du Plessis has won the toss and opted to field first.  Here's what he said, "we're playing the extra seamer today so we want to try and attack Bangladesh with some extra pace. We want to take the learnings from the previous game. I thought he did really well to restrict a strong England batting line-up."

#FafDuPlessis has won the toss and South Africa will have a bowl!

Meaning, Bangladesh will have a fiery test. But their skipper Mashrafe Mortaza is confident. He said, they "had a good preparation. South Africa losing that day doesn't matter. We have to play hard. It's a good wicket to bat on. Tamim is playing. Everyone is fit to play. Our top XI are playing." So, Tamim Iqbal is fit.

Tamim Iqbal is still an uncertainty. He may or may not. But Dale Steyn and Hashim Amla are almost certain to miss the match. Big news for Imran Tahir though, the veteran spinner is sure to play his 100th ODI today.

The coin will be tossed in a while.  Here's a look at the squads