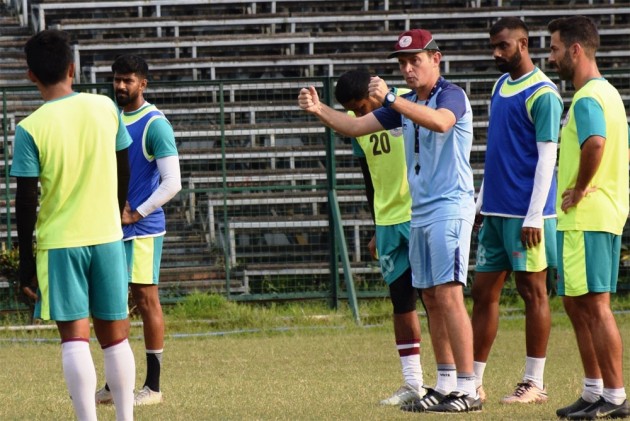 Mohun Bagan would aim to notch up their first win of the season when they take on Churchill Brothers FC in their opening home match of this I-League at Kalyani on Sunday. (More Football News)

The Kolkata giants had played out a goal-less draw to Aizawl FC in their opening match while the Goan side had kicked off their campaign with a comfortable 3-0 victory over former champions Punjab FC.

Incidentally, the Green and Maroons were not able to manage a win against Churchill last season.

Head Coach Kibu Vicuna would want his strikers to get into the business and hopefully field Spaniard Salvador Perez alongside Suhair VP in the attacking lineup with support from Julian Colinas and Joseba Beitia with an aim to inflict some early damage to the Red Machines.

Speaking ahead of the game at the official pre-match press conference, Kibu Vicuna said, "Only two teams walked away with points from an away game in the first week. It's us and Real Kashmir. We should have returned with three points from Aizawl, but unfortunately, we came home with one.

On the other hand, Churchill would walk into the game with a psychological advantage. Not only have they earned a win from their season opener, but they have also fired in three goals against former champions Punjab FC.

Talismanic striker and skipper Willis Deon Plaza will lead the line for the Goan side with able support from Lalkhawpuimawia (Mapuia).

While the former Aizawl FC forward has already showcased his worth, scoring a brace in their season opener, a lot more would be expected out of the duo as they gear up to face the Kolkata giants.

Ahead of their game against Mohun Bagan, Churchill's Dawda Cessay said, "We are happy to enter this game with the momentum behind us. Our aim is to carry the momentum and play to our strengths. Winning always helps in building the morale of the team and we are in the process of building a collective squad.

"Our only objective from any game is to return with a win," he said.

Captain Plaza said, "It doesn't matter which game you are playing, or where you are playing. It is going to be a high-pressure situation whenever you are fighting for something. This is going to be the same for Mohun Bagan game, or for any other game. We just have to keep our focus and ensure that we stick to our plan."