Barcelona are unbeaten in eight matches after an emphatic victory over Granada moved them up to third in LaLiga. 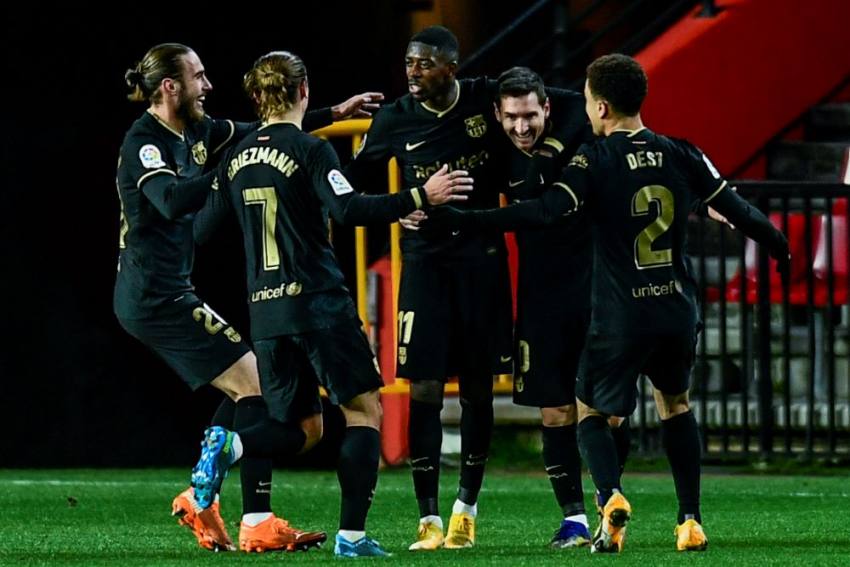 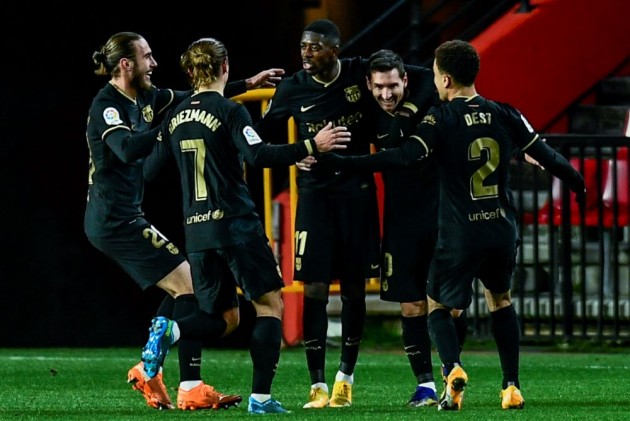 Griezmann also netted a double and assisted one of Messi's strikes in one of his finest showings in a Barca shirt after what has been a difficult spell since joining from Atletico Madrid in 2019.

The victory moves Barca up to third and within four points of Atletico and two of rivals Real Madrid, who are at Osasuna later on Saturday.

10 - @FCBarcelona's Lionel Messi has scored 11 goals in @LaLigaEN 2020/21 (two goals against Granada), the only player to score 10+ goals in 15 consecutive seasons in the competition’s history. Extraterrestrial. pic.twitter.com/oMLAvotCAf

Marc-Andre ter Stegen was called into action inside two minutes, making a superb one-handed save to keep out Antonio Puertas' drive from outside the box.

That proved key when Barca moved into a 12th-minute lead, with Griezmann reacting sharply and comfortably beating Granada goalkeeper Rui Silva after Sergio Busquets' pass had deflected into his path off Roberto Soldado.

Ousmane Dembele shot wide but Barca did double their lead after 35 minutes. Griezmann led a counter-attack and fed Messi, who set himself before dispatching a wonderful finish into the top corner from 18 yards.

The hosts complained Busquets – who was making 600th Barca appearance in all competitions – had handled much earlier in the move, but the goal stood.

Messi then struck again three minutes before the break, arrowing a free-kick from the edge of the area into the bottom corner after Yan Eteki had blocked off Pedri in a dangerous position.

48 - Lionel Messi has scored 48 direct free-kick goals for @FCBarcelona in all competitions (37 in @LaLiga), one more than Cristiano Ronaldo in his profesional club career (47, 32 in league). Stars. pic.twitter.com/sKujVwD6p6

Barca made it four when Griezmann struck again shortly after the hour mark, the France forward controlling Dembele’s chip and sending an excellent right-footed finish beyond Silva.

With the result beyond doubt, Koeman promptly took the opportunity to give Messi, Dembele, Pedri and Frenkie de Jong a rest.

And Granada rounded off a miserable day when Madrid loanee Jesus Vallejo was sent off 12 minutes from time for tugging back Barca substitute Martin Braithwaite as he bore down on goal.

What does it mean? Barca finding form

Granada are seventh and had only lost only one of their last eight games at home, but while they beat Barca here last season it was a surprisingly stress-free day for Koeman as his side dominated and had 72 per cent of the ball.

Barca are now eight matches unbeaten and have three straight wins. A title run still looks like a tough ask given Atletico hold three games in hand but this team at least looks like it can be competitive, which was not the case just weeks ago.

Griezmann gets the antidote he needed

Ahead of the game, Koeman backed Griezmann but said goals would be the "best medicine" to boost the Barcelona forward's confidence.

His last goal came against Ferencvaros in the Champions League on December 2, and he had just three in 16 LaLiga appearances this season.

But with two goals and an assist to his name, he has now been involved in seven goals in his last six games at Los Carmenes. He will hope his latest showing at this happy hunting ground proves a turning point.

No Granada players distinguished themselves, but Vallejo being sent off after only coming on at half-time and Silva conceding all four of the Barca shots that found the target meant it was a particularly unpleasant outing for those two.

- Barca have four straight away wins in LaLiga – three of which have come with clean sheets. This is their best run under Koeman.

- The Argentina forward scored his 48th direct free-kick for Barcelona in all competitions, 37 of them in LaLiga.

- No other player has scored more direct free-kick goals in LaLiga than Messi in the 21st century (37, 17 more than Cristiano Ronaldo).

- Messi has been involved in five of the eight Barcelona goals in LaLiga in 2021 (four goals, one assist).

Barca will soon see if their improved form can turn into a trophy next week in the Supercopa de Espana, which starts when they play Real Sociedad in the semi-final on Tuesday. That is when Granada are back in league business at home to Osasuna.