From Oregon Project To Gordon Gekko: What They Said At World Athletics Championships

The 2019 World Athletics Championships came to a close on Sunday in Doha, and here are some unforgettable quotes, covering every aspect of life 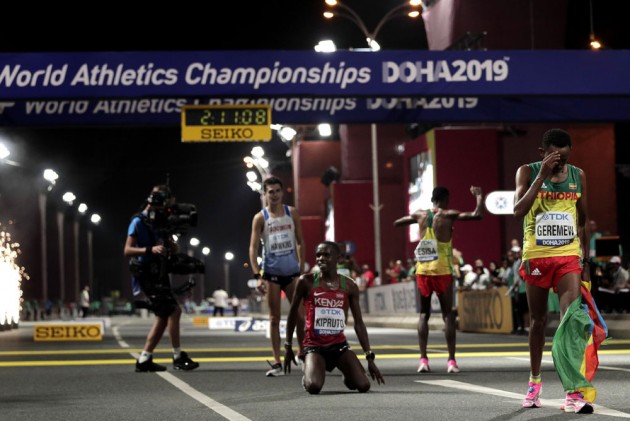 The pick of the quotes from the World Athletics Championships which came to a close on Sunday in Doha:

"I believe in clean sport, I'm always clean, I will always be clean. I believe in the Oregon Project. I've seen Alberto. He's worked really hard and that is what I know." -- Sifan Hassan.

After completing a remarkable 1,500 metres/10,000m double, the Dutch runner launches an impassioned defence of herself and high profile coach Alberto Salazar, whose four-year ban was announced in the middle of the championships.

"It doesn't derail the championship" -- Global athletics chief Sebastian Coe reacts to the ban imposed on Salazar although he may not be buying US Anti-Doping Agency chief Travis Tygart a drink any time soon because of the timing of the announcement, which many saw as intended to have the maximum impact.

"It means a lot to be even mentioned in the same sentence." -- Dina Asher-Smith after winning the 200m at 23, the age at which fellow Britons Jessica Ennis-Hill, in the heptathlon in 2009, and Christine Ohuruogu, in the 400m in 2007, claimed their first world golds.

"At school, I was in the slow classes learning to read. I had a sense of diversion and kind of lost track of my outlook." -- Noah Lyles speaks admirably about his tough times as a child after winning the 200m title. He went on to anchor the US men's 4x100m gold medal-winning relay team.

"The gold means so much to me. Probably more than any individual medal I've won." -- America's two-time 100m world champion and 2004 Olympic gold medallist Justin Gatlin after the US men's 4x100m team finally lifted their 'curse' allowing him to win a relay title at the age of 37.

"Mentally it was even harder because you are 30, you are worried about coming back and not being really at the same level." -- Shelly-Ann Fraser-Pryce talks after winning her fourth 100m world title about the tough journey she had to return to athletics following the 2017 birth of her son Zyon. She was to add a ninth world crown on Saturday in the 4x100m relay.

"These guys are going to hunt me. Crazy times ahead and I am not going to sleep!" -- Charismatic Norwegian Karsten Warholm says he will become the target after successfully defending his 400m hurdles title.

"If Karsten is Gordon Gekko then I am the IRS." -- American Rai Benjamin compares himself to the US Internal Revenue Service when asked who would he be after Warholm declared he admired the fictional immoral financier Gordon Gekko, from the Oliver Stone Wall Street films, and his motto 'greed is good'. Benjamin failed to catch Warholm this time taking silver.

"It was going through my head before the race but not during it as I was focussed only on winning the title and bringing some joy to the people." -- Steven Gardiner delivers gold in the 400m for the Bahamas and a boost to morale following the deadly devastation wreaked by Hurricane Dorian in early September.

"I've gone back to my hotel and cried and cried for hours when things have gone badly. I'm just so happy I came out in front for a change." -- Britain's world heptathlon champion Katarina Johnson-Thompson reveals the heartbreak of her previous failures.

"I wanted to help him cross the line. I think anyone in that situation would have done the same thing." -- Guinea Bissau's 5,000m runner Braima Suncar Dabo is thrust into the limelight after his kindness in aiding distressed Jonathan Busby finish the race. After Dabo helped him across the line, the Aruban athlete left in a wheelchair and was then disqualified for accepting help.

"I was with him (the Emir) just now. I can't tell you (what he said) -- it's top secret." -- Qatar star Mutaz Essa Barshim remains tight-lipped about his royal conversation after delivering high jump gold in front of the country's ruler and a rare full stadium of noisy spectators.