French Open favourite Ashleigh Barty was forced to retire hurt in the second round, throwing the draw wide open 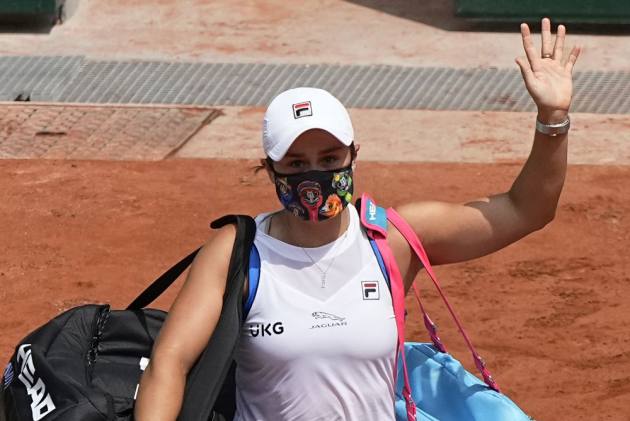 Ashleigh Barty's French Open campaign came to an end in sad circumstances on Thursday as the world number one was forced to retire hurt when 1-6 2-2 down against Magda Linette. (More Tennis News)

Barty required medical attention during her first-round win over Bernarda Pera two days earlier, with a hip injury a cause for concern.

The 25-year-old – back at Roland Garros for the first time since winning her maiden grand slam title in Paris in 2019 – vowed to "play through the pain barrier", yet the injury proved too much to deal with on Thursday.

Barty's retirement throws the draw wide open, with both of the top seeds now out after Naomi Osaka decided to withdraw amid her disagreement with tournament organisers.

Barty's discomfort seemed evident from the off, though Linette did have to fend off an immediate break point to hold in the first game.

The Australian had to claw back three break points on her first serve, however, and a double fault in game four handed Linette the first break, with Barty clearly struggling when attempting to twist to her right.

A lame backhand into the net gifted Linette another break, and the Pole served out the set at the first time of asking with just 36 minutes on the clock.

After a lengthy delay in which she received treatment both on court and back in the changing rooms, Barty returned with seemingly renewed vigour to hold the first game of set two with relative ease.

Linette, though, kept her composure, with a couple of aces helping her level things up, and despite winning the next game thanks to her speed of serve, Barty was grimacing again.

Some excellent returns from Barty kept Linette at bay, but the world number 45 struck a powerful serve down the middle to make it 2-2, and that proved the final straw for her opponent, who shook hands at the net and, with a wave to the crowd, trudged down the tunnel.

Magda Linette progresses to the third-round after 2019 Champion Ashleigh Barty retires due to injury, 6-1, 2-2 [ret].

Linette has claimed one of the biggest wins of her career, though the 29-year-old would have wished for it to come in more glorious circumstances. Barty tried her best to continue, but the injury was having too much of an impact on the key parts of her game – she made four double faults to Linette's zero, and tallied up 18 unforced errors, double the amount of her opponent.