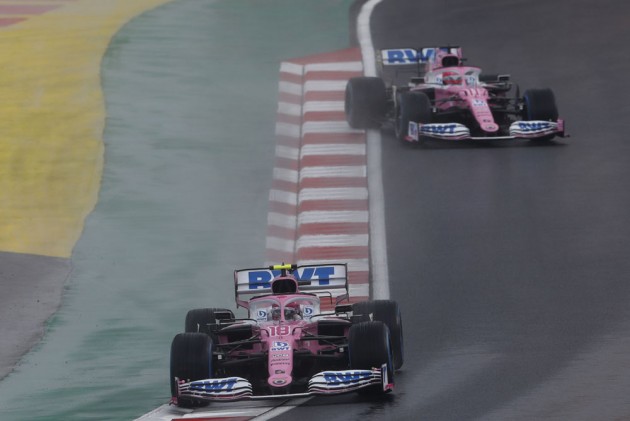 Lance Stroll claimed the first pole position of his Formula One career in a stunning upset in wet conditions at the Turkish Grand Prix, ending Mercedes' dominance in qualifying this year.  (More Sports News)

Racing Point driver Stroll edged out Max Verstappen by 0.290 seconds after the Red Bull man had been fastest all weekend, topping every practice session as well as Q1 and Q2.

Sergio Perez was third after holding provisional pole until the final seconds of a thrilling Q3, while Alex Albon and Daniel Ricciardo rounded out the top five.

Mercedes had taken pole in all 13 races in 2020 - and 14 in a row dating back to last season - but Lewis Hamilton had to settle for sixth on the weekend he could win the world championship, with Valtteri Bottas coming ninth.

In the first grand prix weekend at Istanbul Park since 2011, Q1 started with extreme wet conditions and it did not take long before officials waved the red flag.

That resulted in a 45-minute delay until the track was deemed to have sufficiently improved.

When action resumed, a spin for Romain Grosjean brought out another red flag, after which drivers had to frantically set a time to progress, with Verstappen producing a superb effort to top the timesheet and Hamilton scraping through in 14th.

As the track began to dry slightly, Verstappen once again came out on top in Q2, as both Alfa Romeos impressively made it through in the top 10 at the expense of the two Ferraris, both McLarens and Pierre Gasly.

When Perez went fastest in the last session, his speed prompted many drivers to make the move from full wet to intermediate tyres towards the end of Q3.

His time was trumped by Stroll and while Verstappen was the last contender to cross the line, he could only split the Racing Points to prompt jubilant celebrations in the Canadian's garage.

Mercedes had been off the pace throughout in the wet conditions, with Hamilton finishing 4.795s off the pace and Bottas 5.493s behind.

Hamilton, though, is still in a strong position to win a seventh drivers' title on Sunday. He leads Bottas by 85 points with four races to go and starts three places ahead of his team-mate.

After a chaotic session, all times set under yellow flags during the final moments of Q1 will be reviewed after the race, leaving the possibility of changes to the results.